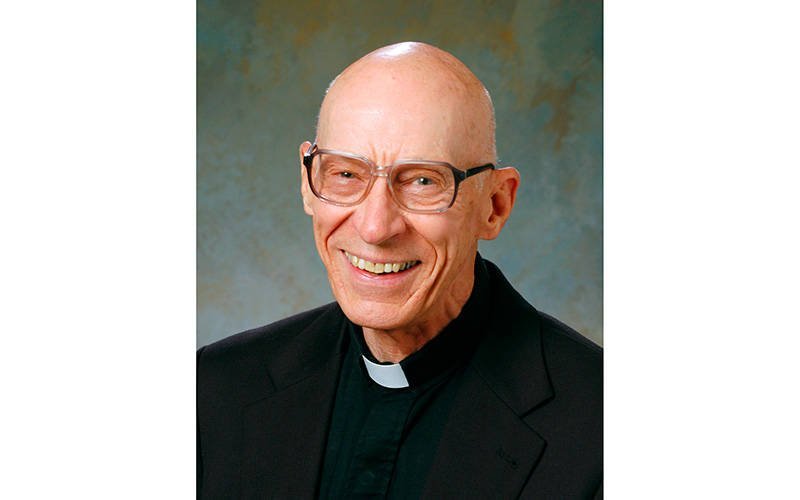 Prior to his time at St. John Fisher, he taught math and religion at several Basilian high schools, including Aquinas Institute in Rochester, where he also served on the school’s board of trustees.

Father Cylwicki arrived at St. John Fisher in 1995. He taught in the mathematics department, tutored in the college’s Math Center, and served as the assistant director of campus ministry and superior of the college’s Basilian priests’ residence. He also served as a longtime member of the college’s board of trustees before being appointed an emeritus trustee upon his retirement from the college and the board in 2020.

Father Kevin Mannara, CSB, director of campus ministry at St. John Fisher, said one of his fondest memories of Father Cylwicki was when the priest drove all the way from California, where he was spending the summer, to Rochester so he could attend Father Mannara’s 2017 ordination.

“He literally arrived by 5:30 a.m., took a short nap and arrived at the church by 9:30 a.m.,” explained Father Mannara, who first met Father Cylwicki upon entering the Congregation of St. Basil. “He said he was going to be there, so he was.”

“He was just a whirlwind of energy,” he said, noting the many roles in which Father Cylwicki served while at St. John Fisher. “He loved being a priest. He was always on the go, ready and willing to say Mass wherever he was invited. He was very generous with his time. He was very well-respected by his colleagues as well as his students.”

In 2015, a lecture hall was dedicated to Father Cylwicki and the late Father Leo Hetzler, CSB. Father Cylwicki was presented with the college’s President’s Medal for Service in 2016.

“His faithful dedication to the mission of our founding Basilian Fathers and his commitment to fulfilling his calling as part of that mission have been a blessing to all in our campus community,” Gerald J. Rooney, president of St. John Fisher College, said in a Feb. 7 statement to the Fisher community. “Father Al will be deeply missed.”

On the occasion of Father Cylwicki’s 60th jubilee of ordination to the priesthood in 2020, theCatholic Courier asked him what made his St. John Fisher tenure so enjoyable. He credited his cohorts’ high academic standards.

“You get to know the faculty because it was a small college — great minds, very professional,” Father Cylwicki said in October 2020.

In addition to his tenure at St. John Fisher, Father Cylwicki also served at the House of Mercy and spent summers assisting parishes in California and New Jersey. He also had two books published, ran 22 marathons and served as chaplain for the NTT IndyCar Series.

Interment will be at Holy Sepulchre Cemetery. Donations in Father Cylwicki’s memory may be made to the Basilian Fathers Scholarship Fund, St. John Fisher College, 3690 East Ave., Rochester, NY 14618.