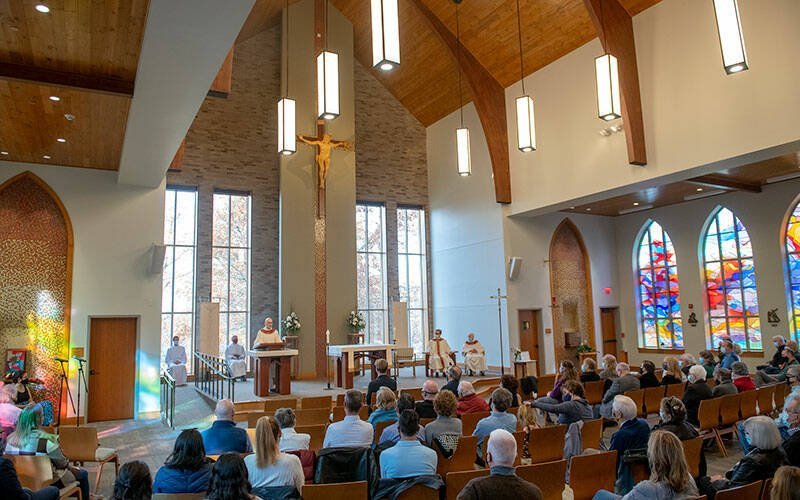 “Teach me goodness, discipline and knowledge.”

These words have guided the priests of the Congregation of St. Basil, also known as the Basilian Fathers, for many years, according to Father Kevin Mannara, CSB. The Basilian Fathers were inspired by that motto when they founded St. John Fisher College in the late 1940s, said Father Mannara, director of campus ministry at the Pittsford college, and those words remain in the college’s mission statement to this day.

“There will be a display of Basilian archival material in the library throughout the year, and there will be a historical display with banners on campus,” he said.

Next fall, well-known artist, speaker and writer Brother Mickey McGrath, OSF, will visit St. John Fisher College to lead the community in painting a mural based on the Basilians’ motto.

“Any of the students that want to get to participate in painting the mural,” Father Mannara said. “The students are going to choose the location on campus for the mural.”

Throughout the next year, celebrations of the Basilians’ bicentennial also will take place in other locales as well, he added.

“The goal is to have one major celebration in each city where we serve. In order for Basilians to get to different places, we’re trying to spread them all out,” he explained.

After the congregation’s founding in 1822, Basilian Fathers spread from France to Canada, and then expanded their ministry south into the United States, Mexico and Colombia. The Basilians have had a presence in the Diocese of Rochester since at least 1927, when they began serving at Aquinas Institute. The Basilian Fathers ran the school from 1937-2000, Father Mannara said.

Although they are no longer responsible for administrative oversight of the school, the Basilians still maintain a presence on Aquinas’ board of trustees and visit the school as often as possible for Mass and other special events, said Father Mannara, who graduated from Aquinas in 1981.

“There’s a significant group of Basilians who trace their vocations back to Rochester and Aquinas. (The Basilians) had an influence on me at Aquinas, even though I was ordained much later,” said Father Mannara, who was ordained in 2017. “They always had an interesting balance between striving for the pursuit of academic excellence balanced with pastoral concern for the students personally.”

Father Mannara said his own vocational path also was influenced by the Basilians he encountered at St. Kateri Parish in Irondequoit while he was discerning his call to the priesthood. Basilian Fathers began serving at Christ the King Parish in Irondequoit in 1976 at the request of then-Bishop Joseph L. Hogan, Father Mannara said. When Christ the King merged with other Irondequoit parishes to form St. Kateri Tekakwitha Parish in 2010, the Basilians continued their ministry at the newly formed parish, where they continued to serve until 2019.

“I know they’re still missed at St. Kateri,” he said, noting that declining numbers of priests forced the congregation to make some hard decisions about where to focus its efforts. “Our numbers warrant that we have to try to focus on certain ministries.”

Campus ministry is one of those areas of focus, he said. Although Basilians no longer serve as administrators or professors at St. John Fisher as they did in the college’s early days, their leadership of campus ministry at the college ensures the “original charism of the founders is being lived out relevant to today’s context,” Father Mannara said.

“The students — possibly in today’s society more than ever — need a religious presence, one that they can turn to,” he remarked. “This is such a crucial time in young people’s lives that it’s really important to have a solid campus ministry.”

Although Father Mannara currently is the only Basilian at St. John Fisher College, there is hope that more priests will join him in the future, he said. The new Hermance Family Chapel of St. Basil the Great was completed in 2017, and Mass attendance and participation in service projects have gone up significantly in recent years, said Father Mannara, who has been director of campus ministry since 2017.

St. John Fisher’s president, Gerard Rooney, has been very supportive of the Basilians, as has Bishop Salvatore R. Matano, and there is an active group of Basilian lay associates in Rochester, Father Mannara said.