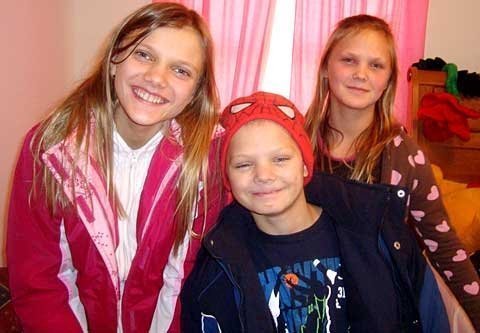 Many years from now, Daniela and Krystyna Skolny will share sisterly stories about the wonderfully unusual 2010 holiday season that marked their very first as family members.

How unusual? For starters, people from three different countries united this past Christmas under the Skolny roof in Bath. To decipher just how that occurred, several heartwarming stories must first be untangled.

A good starting point would be the summer of 2009, when Stan and Sandra Skolny took part in a nine-week hosting program by welcoming into their home Krystyna, a girl from a Ukrainian orphanage. Her visit went so well that by the end of Krystyna’s stay, the Skolnys had begun thinking about adopting her.

"She kind of fell into our lap. She was such a good fit for our family," Stan said.

"We fell in love with her. A week before she left, we realized we couldn’t say goodbye only. I think I started to cry a day before she left, and cried for a couple of days after," said Sandra, who added that Krystyna was eager to be adopted by them as well.

Right about that same time, Stan and Sandra discovered that their first baby was on the way. Daniela was born on Feb. 6, 2010, but a short time later Stan departed for Ukraine to complete the grueling paperwork process in order to adopt Krystyna from her orphanage in the city of Izmail. He was gone for 44 days while his wife stayed home with the newborn Daniela.

"It was not good timing, but we did what we felt was right," Sandra said.

The effort proved successful, as Stan returned to Bath with Krystyna, now 14, in tow as their second daughter.

Around the beginning of November 2010, the Skolnys abruptly discovered that Natasha — a friend of Krystyna’s from the same orphanage — was, through some miscommunication, expecting to spend Christmas in Steuben County with Krystyna although no such plans were actually in place. The Skolnys didn’t want to see the girls disappointed, yet could not afford travel expenses for Natasha. That’s when they turned to the community to see what fundraising possibilities existed, with Stan making a special plea during Sunday Masses at the Skolnys’ parish, St. Mary in Bath.

The feedback was overwhelming: "Some people gave five dollars, some a couple of bucks, some a couple hundred dollars," said Stan, who expressed special thanks to the cluster of St. Mary and St. Gabriel in Hammondsport as well as several community contributors.

"We really are not a town full of rich people. The people who helped us the most are people who really don’t have that much," Sandra remarked.

In fact, so much money came in that Natasha, 13, was able to bring on the trip her brother Vovo, 12, who also resides at the Ukrainian orphanage. They arrived in New York City on Dec. 18 and were transported by the Skolnys to the Southern Tier, where they stayed until Jan. 10.

Also during that time frame, Sandra’s mother and brother made a scheduled visit from Sandra’s native Brazil. The end result was quite a blend of chatter in English, Russian and Portuguese in what added up to one busy Skolny household.

"We have a very international family," Stan quipped on Jan. 2, adding that "we’re packing the van whenever we go out."

The Skolnys and their guests made appearances at St. Mary Church, including Christmas Mass on Dec. 24; a Chinese buffet; a YMCA for swimming; a Binghamton hotel with a pool for New Year’s Eve; and a Chuck E. Cheese’s — "Oh they loved it; we spent hours there," Sandra noted. They also enjoyed simply playing in the great outdoors, according to Stan.

Being reunited with her peers from Eastern Europe was a special thrill for Krystyna: "It’s fun. I can play with them and speak to them in Russian," she said in broken English.

Stan and Sandra Skolny said they were adamant about providing fun for the youngsters, based on their tough backgrounds. Stan noted that in the Ukraine, only a small percentage of youths in orphanages are placed there because their parents have died. Instead, most land in such state-operated facilities due to parents’ alcoholism, abusive tendencies, abandonment and other neglect as well as lack of a strong foster-care system throughout the country. Upon leaving the orphanages in their later teen years, many children end up becoming involved in slave labor, prostitution and crime.

Sandra Skolny suggested that families who are able might consider becoming involved in foreign-exchange and visitation programs for such children, saying several opportunities exist in the Southern Tier. Undoubtedly, Krystyna and her two holiday guests are shining examples of the community goodwill that can be bred by such efforts. According to Sandra, the Skolnys were aided not only with travel money for Natasha and Vovo, but gift certificates, clothing and Christmas presents dropped off at the house, and offers of baby-sitting as well. Stan observed that Bath is small and not very ethnically diverse, but nonetheless townspeople have "really come together to help us out."

"The best support we have received has been beyond money," Sandra stated.

Stan — a teacher at Bath-Haverling Middle School, which Krystyna attends — said Krystyna has helped cultivate this support simply by fitting so well into her new hometown.

"She’s been such a good kid in the community and she’s really flourishing as a student," Stan said, noting that Krystyna did not speak any English as a summer guest in 2009 and now has quickly picked up the language. "She’s really made leaps and bounds."

The positive sentiments are mutual for Krystyna, who described her new living situation as "happy."

"I love the school, love the family, like it here," she said.