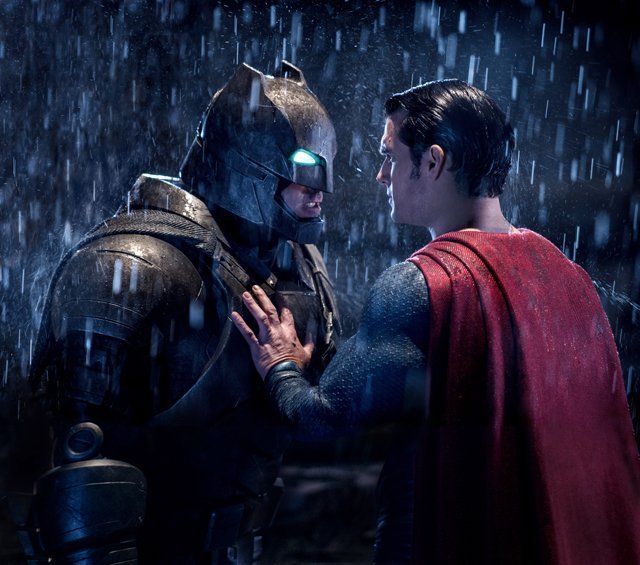 Ben Affleck and Henry Cavill star in a scene from the movie "Batman v Superman: Dawn of Justice." The Catholic News Service classification is A-III -- adults. The Motion Picture Association of America rating is PG-13 -- parents strongly cautioned. Some material may be inappropriate for children under 13.
By Joseph McAleer
Catholic News Service
NEW YORK (CNS) — Darkness hovers over the neighboring cities of Gotham and Metropolis, the main settings of "Batman v Superman: Dawn of Justice" (Warner Bros).
It’s not just the looming clash of the DC Comics titans promised by the film’s title. This follow-up to 2013’s Superman reboot, "Man of Steel," directed again by Zack Snyder, is awash in cynicism and angst. Optimism and goofy fun take a back seat as our superheroes grapple with identity crises and personal dramas.
The movie is, nonetheless, at once thoroughly entertaining and thought provoking, even if its operatic scale comes at the cost of endless mayhem and an ear-splitting score. Snyder straps viewers into a roller-coaster ride that is often exhilarating and ultimately exhausting — and much too intense for the younger set.
The plot picks up where "Man of Steel" left off. With Superman (Henry Cavill) continuing to battle his archenemy, Gen. Zod (Michael Shannon), over the skies of Metropolis, Bruce Wayne/Batman (Ben Affleck) watches in horror as buildings topple and thousands are killed, including employees of his own firm, Wayne Financial.
(Quiet moments of people praying to God — not Superman — for salvation, and blessing themselves, are a welcome sight in a contemporary Hollywood blockbuster.)
Batman comes to regard Superman not as a benign savior but as a conveyor of death and destruction. It’s a discussion pursued by many as the world comes to grips with the mighty alien from the planet Krypton — and wonders what his true intentions are.
Meanwhile, Superman’s alter ego, Clark Kent, and his Daily Planet newspaper colleague Lois Lane (Amy Adams), have moved in together and are seen making love in the bathtub. Domestic bliss, at least of the shacked-up variety, seems at hand.
Not so fast, of course, for a dotty young megalomaniac, Lex Luthor (Jesse Eisenberg), is determined to bring down the Man of Steel who threatens his own desire for global domination.
"Devils don’t come from hell beneath us," Luthor warns. "They come from the sky."
He discovers Superman’s Achilles heel, the mineral kryptonite. Luthor also hatches an elaborate plan to discredit Superman and prey upon Batman’s growing resentment of his rival crime fighter. Before long, hearings are held in Washington by Sen. June Finch (Holly Hunter), holding Superman responsible for the deaths and other collateral damage inflicted by his actions.
So is Superman a champion or a false god? His stepmother, Martha (Diane Lane), offers straight talk: "Be their hero, Clark. Be their angel, be their monument, be anything they need you to be, or be none of it. You don’t owe this world a thing. You never did."
As Superman embarks on some serious navel-gazing and Batman broods in his cave, Luthor instigates what he calls "the greatest gladiator match in the history of the world. God versus man. Day versus night! Son of Krypton versus Bat of Gotham!"
Snyder pulls out all the stops in a fight worthy of Pay-Per-View. Besides the main duo, a malevolent monster called Doomsday is thrown into the mix.
So too is Wonder Woman (Gal Gadot). A 5,000-year-old Amazon princess (she doesn’t look a day over 25), Wonder Woman has no love for Luthor, and joins the resistance to him.
Double W.’s appearance heralds the introduction of several other new super beings the script code names "metahumans." Their arrival sets the stage for a raft of future movies about a crime-fighting team, the "Justice League," that’s clearly intended to rival Marvel’s Avengers.
Prepare yourselves — and don’t forget the earplugs.
The film contains relentless and intense action violence, cohabitation, brief partial nudity as well as occasional profanity and crude language. The Catholic News Service classification is A-III — adults. The Motion Picture Association of America rating is PG-13 — parents strongly cautioned. Some material may be inappropriate for children under 13.
– – –
McAleer is a guest reviewer for Catholic News Service.
Copyright © 2022 Catholic News Service, Inc. All rights reserved. Linking is encouraged, but republishing or redistributing, including by framing or similar means, without the publisher's prior written permission is prohibited.