Battle of the Year - Catholic Courier 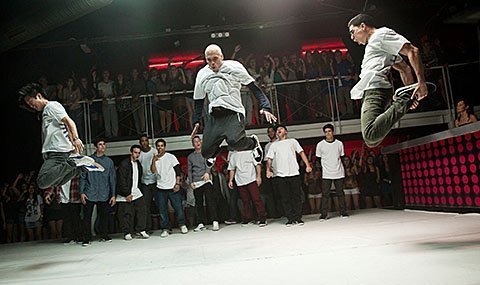 Steve Terada, Chris Brown and Anis Cherufa star in a scene from the movie "Battle of the Year." The Catholic News Service classification is A-III -- adults. The Motion Picture Association of America rating is PG-13 -- parents strongly cautioned. Some material may be inappropriate for children under 13.

NEW YORK (CNS) — In 2007, director Benson Lee countered the widespread but erroneous impression that break dancing (aka b-boying) was a thing of the past with his documentary look at its continued worldwide vibrancy, "Planet B-Boy."

Now he returns with a wide-eyed fictional variation on the same theme titled "Battle of the Year" (Screen Gems).

The street vocabulary deployed by all as this trite underdog story unfolds sets it off limits to younger moviegoers. But grown-ups will find little to bother them amid the energetic precision exercises of Lee’s exploration of — and salute to — a subculture that dates back to the South Bronx of the 1970s.

Hip-hop mogul Dante Graham (Laz Alonso) is anxious for the American team he sponsors to win the international competition of the title, a contest in which they have consistently underperformed in recent years. So he hires Jason Blake (Josh Holloway), an old friend from his own groove-busting days, to shake things up and break the losing spell.

Blake’s challenge is to put together an all-star "dream team" made up of the best dancers from across the country and, partly by drawing on his experience as a basketball coach, mold them into a cohesive unit.

Aided by Franklyn (Josh Peck), a young employee of Dante’s company who becomes his assistant, and by Stacey (Caity Lotz), a choreographer Franklyn introduces into the mix, Blake works to instill notions of unity and teamwork into his ego-driven charges. Typical of the uphill struggle he faces is the acrimonious romantic rivalry that has ex-partners Rooster (singer Chris Brown) and Do Knock (Jon Cruz) trading insults and giving each other the finger at every opportunity.

Unbeknownst to the youngsters, Blake is also battling the drinking problem he developed following the tragic death of his wife and teenage son.

As scripted by Brin Hill and Chris Parker, "Battle of the Year" preaches predictable Hollywood homilies about the need for self-confidence, cooperation and hard work.

Tolerance is also extolled through the story of Lil Adonis (Richard Maguire), an openly gay b-boy who initially finds himself shunned by one of his teammates. Since his only aim is to be treated with respect as an individual and a peer, however, viewers of faith will be as supportive of Lil Adonis’ cause as anyone else in the audience.

The film contains a fleeting scatological image, mature references, including to homosexuality, a few uses of profanity, considerable crude and crass language and numerous obscene gestures. The Catholic News Service classification is A-III — adults. The Motion Picture Association of America rating is PG-13 — parents strongly cautioned. Some material may be inappropriate for children under 13.