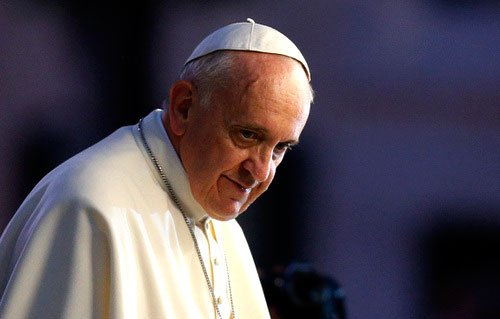 VATICAN CITY (CNS) — Bishops must have "ecclesial sensitivity," being bold in denouncing cultural trends that offend human dignity, but also trusting their lay faithful to fulfill their vocations in the world, Pope Francis said.

"Ecclesial sensitivity" involves taking on "Christ’s attitudes of humility, compassion, mercy, concreteness and wisdom," the pope, who is bishop of Rome, told the other bishops of Italy May 18, opening their annual general assembly at the Vatican.

Part of "ecclesial sensitivity" is "reinforcing the indispensable role of the laity willing to take on the responsibilities that belong to them," he said. "In reality, laypeople who have an authentic Christian formation do not need a ‘bishop-pilot’ or a ‘monsignor-pilot’ or clerical input to assume their responsibilities at every level from the political to the social, from the economic to the legislative. Instead, they need a ‘bishop-pastor.’"

During their meeting May 18-21, the bishops were to discuss how their faithful have received Pope Francis’ apostolic exhortation, "The Joy of the Gospel," and look at ways to implement its teaching.

Pope Francis told them, "At this moment of history when we often are surrounded by discouraging news, by local and international situations that make us experience affliction and tribulation — in this framework that truly is not comforting — our vocation as Christians and as bishops is to go against the tide."

Bishops, and all Catholics with them, are called "to be joyful witnesses of the risen Christ in order to transmit joy and hope to others."

"It is awful," he said, to meet a bishop, priest or religious who is "beaten down, unmotivated or exhausted. He is like a dry well where the people cannot find water to quench their thirst."

Pope Francis also told the bishops that in his two years as pope and with his thousands of meetings with all sorts of Catholics, he has noticed "a weakening of collegiality" or communion among bishops and between bishops and priests in various parts of the world.

One sign of that, he said, is "the lack of a habit of reviewing" how well projects were carried out, how effective they were and how well they were received.

The church misses the mark, he said, when, "for example, one organizes a conference or event that highlights the usual voices, anesthetizes the community (and) homogenizes choices, opinions and persons instead of allowing ourselves to be carried to those horizons where the Holy Spirit asks us to go."

Like Christ, he said, a bishop must not be "timid or irrelevant in denouncing and defeating a widespread mentality of public and private corruption that impoverishes" families, young people and retirees, and further marginalizes the poor.

"Ecclesial sensitivity" urges bishops to "go out to the people of God in order to defend them from the ‘ideological colonization’ that takes away human identity and dignity," he said. In the past, the pope has used "ideological colonization" to refer to the strong pressure being used to convince people and nations to adopt practices such as same-sex unions and abortion.

The pope also told the Italian bishops that too many episcopal conferences seem to ignore the concrete reality of their people when drafting what are supposed to be pastoral teachings and guidelines.

"An abstract theoretical-doctrinal aspect should not prevail as if our guidelines were not destined for our people or our nations, but only for certain scholars or specialists," he said. "Instead, we must make the effort to translate them into concrete and intelligible proposals."

Pope Francis’ 10-minute introduction was broadcast live, but his conversation with the bishops was to continue behind closed doors. He told the bishops he was there to listen "to your reflections, your ideas (and) your questions."