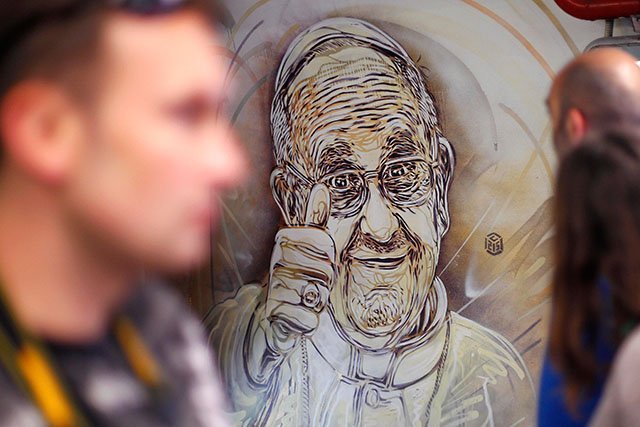 People pass a mural by French street artist Christian Guemy, also known as C215, which depicts Pope Francis giving the thumbs-up sign in a subway station in downtown Rome May 9.

VATICAN CITY (CNS) — Christians who are too serious and gloomy have the Holy Spirit missing from their lives, Pope Francis said.

Be meek and open to the Spirit and don’t fight the joy and unexpected newness he brings, the pope said May 13 during his early morning Mass at the Domus Sanctae Marthae.

People who think they can and do know everything won’t be able to understand God, he said in his homily, according to a report by Vatican Radio.

Jesus always had trouble with the kind of religious intellectuals who "believed that religion was only about texts and laws," the pope said. For them, all that was necessary was "to fulfill the commandments and nothing more. They didn’t imagine the Holy Spirit existed."

As a result, all they did was demand explanations from Jesus, he said. "They wanted to debate. Everything was in the head, everything was about the intellect," and there was no "heart, no love, no beauty, no harmony."

"When there is lots of seriousness, there is no Spirit of God," he said.

It never mattered what Jesus said and did, he said. Even raising Lazarus from the dead "right in front of them" could not convince them because they refused to "open their heart to the Holy Spirit."

Belief for them was based on "ideas, their own ideas. They are full of pride. They think they know it all," he said.

But, Jesus had "something very strong" to say to these people, Pope Francis said. According to the day’s reading from the Gospel of John (10:22-30), Jesus told them, "You do not believe because you are not among my sheep."

Jesus told them they had turned their backs on and separated themselves from the people of God, the pope said. They "built up a whole system of commandments that banished people" and drove them out of the church.

These "aristocrats of the intellect" weren’t stubborn; it was worse and "more dangerous," the pope said. They had hearts that were closed and hardened against the Holy Spirit, which is "the sin of resisting" him.

God wants people to have hearts that are meek and open to the Spirit, like many of the early pagan converts who received the Gospel, as told in the day’s first reading, Acts 11:19-26.

Those preaching the Gospel far from Jerusalem let the Spirit do its work, bringing the word and opening "the doors to the Greeks, the pagans" — communities considered "impure" and unworthy of God.

But the Holy Spirit acts on those who are "mild, kind, humble and open to the Spirit," he said. Even though people may not be able to see it with their own eyes, "the Holy Spirit is acting in the church today, acting in our lives."

Pope Francis asked people to pray for the grace of being open to the Holy Spirit so that they can move forward, "being creative, being joyous."

Let the "grace of meekness and the Holy Spirit help us defend ourselves from that other, evil spirit of being self-sufficient, proud, arrogant" and having a heart hardened against God.