Be servants to one another, pope tells prisoners before washing feet - Catholic Courier 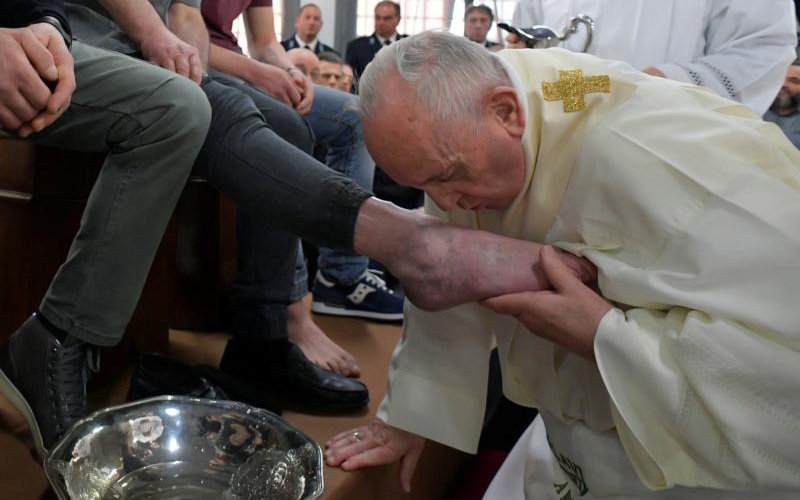 Pope Francis washes, then kisses, the foot of an inmate during a Holy Thursday celebration at Velletri Correctional Facility, 36 miles south of Rome. (CNS photo by Vatican Media, via Reuters)

ROME (CNS) — Jesus’ gesture of washing his disciples’ feet, an act once reserved to servants and slaves, is one that all Christians, especially bishops, must imitate, Pope Francis told hundreds of inmates and prison employees on Holy Thursday.

“Jesus’ rule and the rule of the Gospel” is to serve others and not “to dominate, do evil or humiliate others,” the pope said April 18 during his homily at the Velletri Correctional Facility, 36 miles south of Rome.

“The church asks the bishop to imitate Jesus’ gesture every year — at least once a year — on Holy Thursday,” he said. “The bishop isn’t the most important (person); the bishop must be the greatest servant. And each one of us must be servants to others.”

Pope Francis celebrated the Mass of the Lord’s Supper at the prison and washed the feet of a dozen inmates. Nine were Italian and one each was from Brazil, Ivory Coast and Morocco, the Vatican said.

Vatican News reported the prison houses more than 570 prisoners; 60 percent of those incarcerated are non-Italians.

The Mass was held in the room the prison uses as a theater; it was draped in white curtains. The altar, lectern and a wooden statue of Mary were adorned with white and yellow flowers.

As Pope Francis made his way into the room at the start of the Mass, the detainees were unable to contain their joy. The solemnity of the opening procession was interrupted by the applause and cheers of the detainees upon seeing the pope.

In his brief homily before the foot-washing ritual, the pope told the prisoners that the act of washing one’s feet was a task reserved solely to slaves who would wash the feet of any guests that arrived at the house.

However, Jesus, “who had all the power, he who was the Lord, makes the gesture of a slave,” he said.

“This is brotherhood; brotherhood is always humble; it is to be at the service (of others),” the pope said

Pope Francis also recalled another Gospel reading in which the disciples argued about who was the greatest among them. Jesus’ response to them — that the greatest should serve the least — “is something interesting that we can connect with today’s gesture,” he said.

“We, too, must be servants. It is true that in life there are problems; we argue among ourselves, but this must be something that passes, a passing phase. In our hearts, there must always be this love to serve the other, to be at the service of others,” the pope said.

After Mass, Maria Donata Iannantuono, director of the correctional facility, thanked Pope Francis for his visit. Several inmates and prison employees also presented him with gifts and letters.

As the pope made his way out of the theater, prisoners shouted “Viva il papa” (“Long live the pope”) and applauded loudly.

Pope Francis has made it a tradition to celebrate Holy Thursday with people who could not come to the Vatican or the Basilica of St. John Lateran for the celebrations.

His first year as pope in 2013, he chose a juvenile detention facility to celebrate Holy Thursday. The next year, he washed the feet of people with severe physical handicaps at a rehabilitation center. That was followed by men and women detainees at Rome’s Rebibbia prison in 2015, refugees in 2016, inmates at a jail in the Italian town of Paliano in 2017, and prisoners at Rome’s “Regina Coeli” jail in 2018.