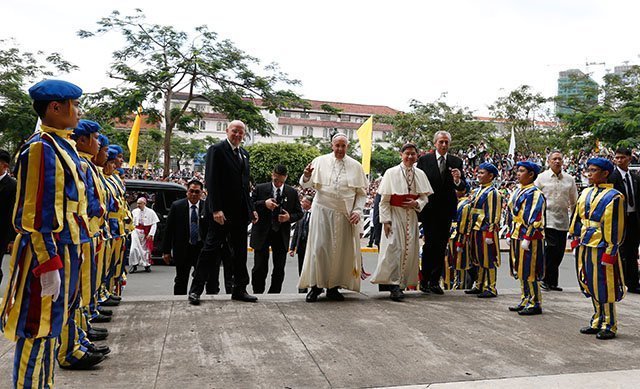 Pope Francis and Cardinal Luis Antonio Tagle of Manila walk past boys dressed as Swiss Guards as the pope arrives to celebrate Mass with bishops, priests and members of religious orders in the Cathedral of the Immaculate Conception in Manila, Philippines, Jan. 16.

MANILA, Philippines (CNS) — The Gospel has the power to transform society, ensuring justice and care for the poor, but that can happen only if Christians — beginning with the church’s ministers — allow the Gospel to transform them, Pope Francis said.

At the beginning of a Mass Jan. 16 with Philippine bishops, priests and religious in Manila’s Immaculate Conception Cathedral, Pope Francis led the congregation in a special penitential rite to ask forgiveness for ways they have failed to live up to the high ideals of their promises of poverty, chastity and obedience.

Pope Francis introduced the rite with a prayer: "Unworthy though we are, God loves us and has given us a share in his Son’s mission as members of his body, the church.

"Let us thank and glorify God for his great love and infinite compassion," the pope prayed. "Let us beg for his forgiveness for failing to be faithful to his love. And let us ask for the strength to be true to our calling: to be God’s faithful witnesses in the world."

To the delight of the congregation, Pope Francis demonstrated that he was not simply reading English, but understood it. The prepared text of his homily began with Jesus’ words to St. Peter, "Do you love me?"

Someone close to the front of the cathedral responded yes. The pope, laughing, responded, "Thank you," then explained, "I was reading the words of Jesus."

Starting again, the pope said Jesus’ words to the Apostle, "Do you love me? … Tend my sheep," are a reminder of "something essential: All pastoral ministry is born of love. All consecrated life is a sign of Christ’s reconciling love." 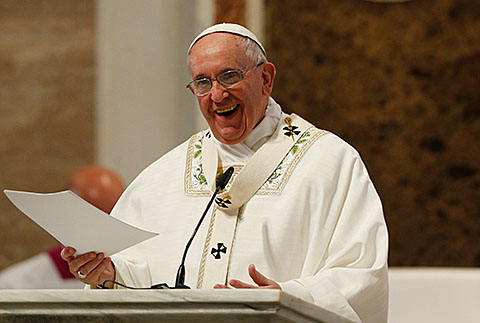 Pope Francis laughs as he jokingly asks the audience a question while celebrating Mass with bishops, priests and members of religious orders in the Cathedral of the Immaculate Conception in Manila, Philippines, Jan. 16. The pope asked the crowd if they loved him, referring to Jesus’ question to Peter in the day’s Gospel reading.

"Each of us is called, in some way, to be love in the heart of the church," the pope said.

With almost a quarter of the country’s population living in poverty, with their exposure to typhoons, floods and earthquakes, and with a government plagued by corruption scandals, he said, the church must "acknowledge and combat the causes of the deeply rooted inequality and injustice which mar the face of Filipino society, plainly contradicting the teaching of Christ."

Individual Christians must "live lives of honesty, integrity and concern for the common good," he said, but they also must create "networks of solidarity which can expand to embrace and transform society by their prophetic witness."

Departing from his prepared text, the pope said: "The poor. The poor are the center of the Gospel, are at the heart of the Gospel. If we take away the poor from the Gospel, we can’t understand the whole message of Jesus Christ."

Preaching the Gospel, he said, requires living it. "How can we proclaim the newness and liberating power of the cross to others if we ourselves refuse to allow the word of God to shake our complacency, our fear of change, our petty compromises with the ways of this world, our ‘spiritual worldliness?’"

Materialism is a danger that creeps into people’s lives, even the lives of priests and religious, he said. "Only by becoming poor ourselves, by stripping away our complacency, will we be able to identify with the least of our brothers and sisters."

Although several elderly priests and religious were present — and were greeted by the pope during the sign of peace — many in the congregation were still in their 20s, and Pope Francis gave them a special commission to reach out to their peers.

Financial and social-political difficulties have left many young Filipinos "broken in spirit, tempted to give up, to leave school and to live on the streets," the pope said. Young church workers have a special obligation to be close to their peers because, despite everything, they "continue to see the church as their friend on the journey and a source of hope."

He also urged the seminarians, young priests and religious to "proclaim the beauty and truth of the Christian message to a society which is tempted by confusing presentations of sexuality, marriage and the family."

"As you know," he said, "these realities are increasingly under attack from powerful forces which threaten to disfigure God’s plan for creation and betray the very values which have inspired and shaped all that is best in your culture."

Cardinal Luis Antonio Tagle of Manila, greeting the pope at the end of the Mass, told him the cathedral had been repeatedly destroyed by fires, earthquakes and during war. "But it refuses to vanish. It boldly rises from the ruins — just like the Filipino people," he said.

"The Filipino has two treasures: music and faith, ‘la musica e la fede," the cardinal told him in English and Italian. "Our melodies make our spirits soar above the tragedies of life. Our faith makes us stand up again and again after deadly fires, earthquakes, typhoons and wars."

"We welcome you, successor of Peter, to this blessed land of untiring hope, of infinite music and of joyful faith," the cardinal told the pope. "With your visit, we know Jesus will renew and rebuild his church in the Philippines."

Although the Mass was for bishops, priests and religious, tens of thousands of people gathered outside the cathedral, watching the Mass on large video screens set up on the cathedral steps.