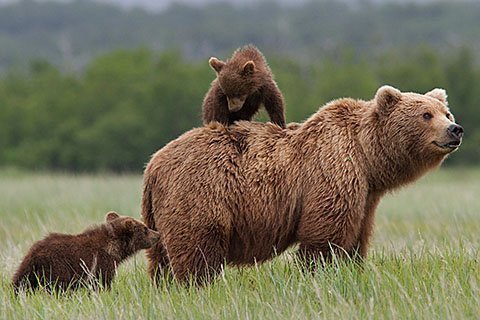 NEW YORK (CNS) — Mother knows best, even in the animal kingdom, as demonstrated in "Bears" (Disneynature), a wildlife documentary about a year in the life of an Alaskan brown bear and her two cubs.

This fifth offering from the Disneynature series, directed by veterans Alastair Fothergill ("Chimpanzee") and Keith Scholey ("African Cats"), is an innocently voyeuristic treat for just about every age, a marvel of moments great and small captured in stunning cinematography.

Narrated with brio by John C. Reilly, "Bears" starts deep in the den at winter’s end. A mother bear, nicknamed Sky, is nursing her two newborn cubs, Scout and Amber. The long hibernation period is over, and the moment has arrived to go out into the wilderness to search for food.

Time is of the essence, we’re told, as half of all newborn bear cubs do not survive their first year — victims of starvation and predators.

So we follow the trio as they make their way down the mountain to the sea, hoping to feast on migrating salmon. Sky must fatten herself up so she can survive the next winter’s sleep and provide milk for her cubs.

There are obstacles along the way, including other, not-so-friendly bears who guard their feeding grounds, and even nastier wolves who like to eat bear cubs.

Mom also must contend with the emerging personalities of her offspring. Amber is shy and stays close to home, while Scout is mischievous and rambunctious, and often in need of rescue.

Such sentimental anthropomorphizing (a Disney hallmark) can be intrusive, making one wonder just how elaborately edited this "true-life" adventure is.

Moreover, the cutesy and cuddly quotient in "Bears" is off the charts. Fortunately, moments of ferocious fighting remind us that these are wild animals, not pets. In fact, the savage interaction may be a bit too intense at times for the youngest of viewers.