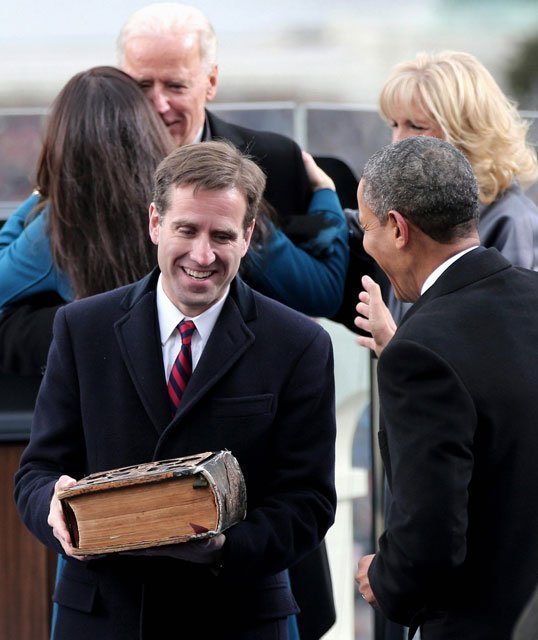 Beau Biden, son of U.S. Vice President Joe Biden, carries the family Bible as he walks past President Barack Obama after the vice presidential swearing-in on Inauguration Day on the West Front of the U.S. Capitol in Washington in this 2013 file photo. Beau Biden, former Delaware attorney general, died of brain cancer May 30, less than two years after he was diagnosed with the disease. He was 46.

BETHESDA, Md. (CNS) –Beau Biden, a Catholic who was former attorney general of Delaware and the oldest son of Vice President Joe Biden, died May 30 at Walter Reed National Military Medical Center in Bethesda of brain cancer. He was 46.

In a statement posted on the younger Biden’s website, the family said: "It is with broken hearts that (we) announce the passing of our husband, brother and son, Beau, after he battled brain cancer with the same integrity, courage and strength he demonstrated every day of his life."
"The entire Biden family is saddened beyond words. We know that Beau’s spirit will live on in all of us — especially through his brave wife, Hallie, and two remarkable children, Natalie and Hunter."
A private Mass for the Biden family was to be celebrated for the family June 4 at St. Joseph Church on the Brandywine in Greenville, Delaware, where he was a parishioner.
A funeral Mass for Biden was to be said June 6 at St. Anthony of Padua Church in Wilmington, Delaware. Burial will be at St. Joseph on the Brandywine Cemetery, where Beau’s mother and sister, who were killed in the car accident years ago, are buried.
Wilmington Bishop W. Francis Malooly said in a statement he "was saddened to hear of Beau Biden’s passing" and offered "heartfelt condolences" to the entire Biden family.
"I pray that Our Lord will give them strength during this time of sadness and that they find consolation and hope in the knowledge that Beau is in the presence of a merciful God," the bishop said. "Beau Biden was an outstanding husband and father and a hard-working public servant who left his mark on Delaware and our nation. … He was truly a real gentleman in every way possible. May the Lord now provide him eternal life."
Joseph Robinette "Beau" Biden III was born Feb. 3, 1969, in Wilmington to Joe Biden and Neilia Hunter Biden. In 1972 his mother and infant sister, Naomi, were killed in an automobile accident, and he and his brother, Hunter, were seriously injured.
While he was a U.S. senator, Joe Biden would commute from Washington to Wilmington and back by train each day so he could serve in Congress and then be home as much as he could to spend time with his sons and attend their athletic events and other school activities. Joe Biden married Jill, an educator, in 1977.
In May 2010, Beau Biden suffered a mild stroke. In August 2013, he was admitted to the University of Texas MD Anderson Cancer Center in Houston and diagnosed with brain cancer. A lesion was removed at that time; Biden had radiation and chemotherapy treatments, and the cancer was in remission.
On May 20 of this year, he was admitted to Walter Reed when doctors found his brain cancer had returned; he died there 10 days later.
A graduate of Syracuse University College of Law, he worked at the U.S. Justice Department in Philadelphia from 1995 to 2004. He was a federal prosecutor in the U.S. Attorney’s Office when in 2004 he became a partner in a Wilmington law firm. He worked there for two years before being elected Delaware attorney general.
He won on a campaign that outlined his plans to deal with sex offenders, Internet predators, senior abuse and domestic abuse, and he also was a defender of the death penalty.
Biden had joined the military in 2003 as a member of the Delaware Army National Guard and was a major in the Army’s Judge Advocate General Corps. His unit was activated to deploy to Iraq Oct. 3, 2008, and he spent a year on active duty there.
"Beau’s life was defined by service to others," the family said in its statement. "As a young lawyer, he worked to establish the rule of law in war-torn Kosovo. A major in the Delaware National Guard, he was an Iraq War veteran and was awarded the Bronze Star.
"As Delaware’s attorney general, he fought for the powerless and made it his mission to protect children from abuse."
The statement said that more than his professional accomplishments, "Beau measured himself as a husband, father, son and brother. His absolute honor made him a role model for our family. … Beau Biden was, quite simply, the finest man any of us have ever known."
Copyright © 2022 Catholic News Service, Inc. All rights reserved. Linking is encouraged, but republishing or redistributing, including by framing or similar means, without the publisher's prior written permission is prohibited.