Because he first loved us, show mercy - Catholic Courier 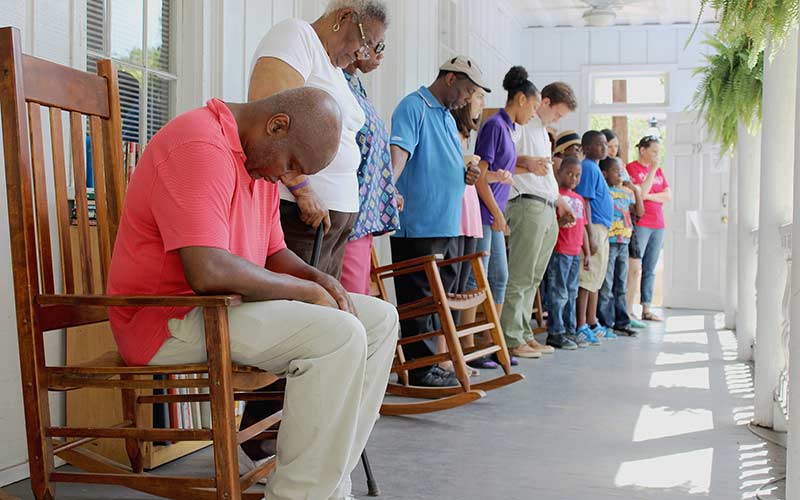 Members of the Manna Life Center lead an ecumenical prayer service June 19, 2015, at the Neighborhood House in Charleston, S.C., which is part of Our Lady of Mercy Community Outreach Center. They prayed for the victims of the shootings at Mother Emanuel African Methodist Episcopal Church, and the children who lost their parents. (CNS photo by Victoria Wain/The Catholic Miscellany)

This is the fifth installment in a series on the Eight Beatitudes. This week discusses the fifth beatitude: “Blessed are the merciful, for they will be shown mercy.”

The word “mercy” is a beautiful one. A word synonymous with the one we worship, the Merciful One. Whispered quietly, it nearly tastes sweet on one’s lips.

I pray I may never hear it screamed at the top of one’s lungs as they beg for it to be granted.

And yet, if I listen to the deafening silence in the world around me, I can hear the pleads for mercy. The prayers for forgiveness. The appeals for compassion.

And I see many, giddy with the small and temporary powers, brandish that power, carelessly and crudely. They even grow large with a sense of pride and purpose for exerting that lack of compassion.

But I have felt mercy. There were great mercies. Once deep in the lush green forests of Oregon when I felt the Merciful One’s presence so strongly, I knew I was loved and forgiven. Or once in bustling London traffic, when I felt a nudge and gently moved out of oncoming traffic.

There have been tiny mercies too. Tender, trifling mercies I might have missed if I had not been told God’s mercy is not spent. That his mercies come new every morning. Like the sunrise itself, my son’s laughter or an interaction with a stranger.

I have heard other stories of mercy.

In Southern California, where I grew up, the parents of the families around me spent the ’60s aimless and intoxicated. When Jesus came into their life, they were changed.

The generosity of spirit that flows from these families is still felt by me today, in their love and their prayers. They will never forget how Christ’s love broke through.

I have heard epic stories of mercy.

There is a story you may have heard. How a white man walked into a Black church. How he killed nine people as they worshipped. How his hate had festered into murder. And how less than 48 hours after that horrific scene, the families of those killed stood in court and said to that man, “I forgive you.”

I wonder what it must feel like to be on the receiving end of that kind of mercy.

Maybe you have heard the stories of a woman who survived the horrors of a Nazi concentration camp that took the lives of the rest of her family. How later she met one of the SS officers who had been particularly cruel to her sister. How when he asked for forgiveness, she extended it him. The two of them embraced and the love and mercy overwhelmed them both.

I wonder what it must feel like to be on the receiving end of that kind of mercy.

Or perhaps the story that best describes the act of mercy. How Our Lord hung there. Naked and exposed. His body bashed and discolored. For the crime of compassion. He prayed, “Father, forgive them, they know not what they do” (Lk 23:34).

Because of all this, we are compelled to show mercy. To give up our need for control and judgment. To begin the cycle of mercy once again.

“Blessed are the merciful, for they will be shown mercy,” the Merciful One proclaimed to the multitude.