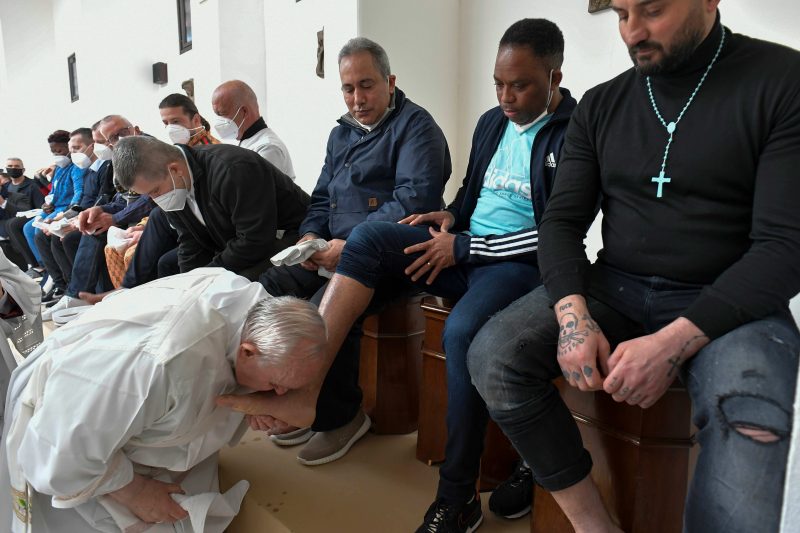 Pope Francis kisses the foot of an inmate after washing it during the Holy Thursday Mass of the Lord's Supper at a prison in Civitavecchia, Italy, April 14, 2022. (CNS photo by Vatican Media)

VATICAN CITY (CNS) — Before washing the feet of 12 inmates, Pope Francis told them and other prisoners that God never tires of forgiving anyone who asks.

When Jesus washed his disciples’ feet, including the feet of Judas, who would betray him, it was a sign that God will wait patiently for everyone and will forgive everything, the pope said in his homily April 14 at a prison in Civitavecchia, northwest of Rome.

“Each of us, perhaps, has something in his heart that he has been carrying for some time,” that agitates him, “some little skeleton hidden in the closet,” the pope said. “But ask Jesus for forgiveness. He forgives everything.”

The pope celebrated the Holy Thursday Mass of the Lord’s Supper at the prison and washed the feet of 12 inmates — men and women of different ages and nationalities, according to the Vatican press office.

Pope Francis encouraged the inmates to pray: “Lord, forgive me. I will try to serve others, but you serve me with your forgiveness.”

“There is a Lord who judges,” the pope told them, “but it’s a strange judgment: The Lord judges and forgives.”

The Mass was private, but the Vatican released the pope’s homily, some photographs and a video clip.

The photos showed 12 inmates seated on an elevated platform for the foot-washing ritual, which meant that the pope, who has been experiencing severe knee pain and difficulty walking, could wash their feet while standing.

Pope Francis told the inmates he knows that washing someone else’s feet can seem to be “a strange thing” today, but it is a reminder of Jesus, who “teaches us this, and it is simple: You have to wash each other’s feet, one serving the other, without self-interest.”

“How nice it would be if this were possible to do every day and for all people,” the pope said, urging the prisoners to serve one another and forgive each other.

“And now, I am going to try to do the same thing that Jesus did: wash feet,” he said at the end of the homily. “I do this from the heart because we priests should be the first to serve others, not exploit others. Clericalism sometimes leads us down this road. But we must serve.”

Washing feet, he said, “also is a sign of love for these brothers and sisters and for all of you here; a sign that means, ‘I do not judge anyone. I try to serve everyone.'”

At the end of Mass, the inmates gave the pope an overflowing box of artichokes, flowers, herbs and other things they grow in the prison garden.

After the liturgy, the Vatican said, Pope Francis went to a nearby conference room and met with about 50 people, including inmates, guards and prison officials.

Father Raffaele Grimaldi, head of the Inspectorate General of Italian Prison Chaplains, had announced April 13 that the pope would be celebrating the liturgy at the prison, which has about 500 inmates.

The pope, Father Grimaldi said, would wash the feet 12 inmates, “stooping before their poverty and weaknesses, washing the feet of those who have walked the streets of violence, trampling on the rights of the innocent.”

“Despite physical fatigue and hidden sufferings, Pope Francis never tires of traveling dusty, muddy, and bumpy roads ‘to go in search of what is lost,'” the chaplain said, and he “is not ashamed to get his hands dirty” washing the feet of those “condemned by human justice but saved by God’s mercy.”

The first year of his pontificate, he chose a juvenile detention facility near Rome. In 2014, he washed the feet of people with severe physical handicaps at a rehabilitation center in Rome. The next year, he was at a Rome prison and, in 2016, he celebrated the liturgy and foot-washing ritual at a center for migrants and refugees. From 2017 to 2019, he again chose prisons.

In 2020 — during Italy’s COVID-19 lockdown — Pope Francis celebrated a scaled-down liturgy in St. Peter’s with only about a dozen people in the congregation. There was no foot washing and no procession with the Eucharist at the end.

Last year, amid ongoing pandemic restrictions, the pope celebrated the Mass privately in the chapel of Cardinal Angelo Becciu, the former prefect of the Congregation for Saints’ Causes, who was forced to resign and is now on trial for alleged financial malfeasance.