Behold the Lamb of God: 'Scenes from the Passion of Christ' - Catholic Courier 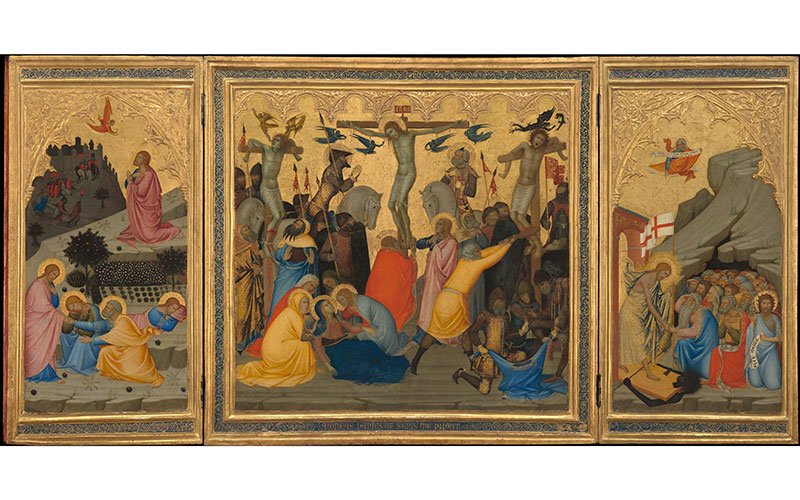 This is a 14th-century altarpiece by Andrea di Vanni titled "Scenes From the Passion of Christ: The Agony in the Garden, the Crucifixion, and the Descent into Limbo." (CNS photo by Corcoran Collection, William A. Clark Collection via National Gallery of Art)

During Holy Week, the Lord’s passion, death and resurrection are recalled not as past historical events, but as mysteries of faith by which we share in the power of Jesus’ passing from life to death to new life with God.

Jesus’ suffering, death and resurrection becomes the pattern of our dying to sin and rising to new life in Christ. In renewing our baptismal promises at Easter, we pass over to the new life of grace, begun at baptism, and revealed in the Passover of Jesus.

An exquisite 14th-century triptych altarpiece, titled “Scenes From the Passion of Christ: The Agony in the Garden, the Crucifixion, and the Descent into Limbo,” invites us to walk with Jesus on his paschal journey this Holy Week.

It is the work of Andrea di Vanni, a prominent painter from Siena, Italy, who signed his name along the bottom edge of the central panel. Given the modest size of the portable triptych, it was probably intended for personal use in a private chapel.

Deep shades of red, yellow and blue against a brilliant gold background remind us that the scene spans heaven and earth. Carefully painted figures evoke dramatic emotions and movement in a simultaneous narrative, with different scenes unfolding on the same canvas.

Reading the painting from left to right we have a visual catechesis inviting us into the sacred events of Holy Week.

On the left wing of the triptych, Jesus, in a pale red robe, kneels in anguished prayer. Jesus’ agony was so intense that his sweat became like drops of blood falling to the ground. His eyes are raised to heaven where an angel holds out a chalice.

And with his hands Jesus conveys the words he prayed to his heavenly Father, “If you are willing, take this cup away from me; still, not my will but yours be done” (Lk 22:42).

Below Jesus finds the disciples sleeping, exhorts them to stay awake and to pray they may be spared from the test. In the upper left, soldiers arrest Jesus, now betrayed by Judas.

The central panel depicts Jesus’ death by crucifixion. Multiple figures move below the cross on which Jesus, with bruised body, bows his head in final self-sacrificial love. Above Jesus’ head the words “INRI” convey in Latin the title Pontius Pilate had written to be inscribed on the cross, “Jesus the Nazorean, the King of the Jews.”

Angels minister to Jesus as Mary, his mother, overwhelmed by the suffering of her divine son faints into the arms of two women. At the foot of the cross is Mary Magdalene venerating Jesus’ body, and St. John, the beloved disciple. On the lower right, soldiers in a greedy frenzy cast lots for Jesus’ garment.

The good thief is carried by angels to heaven as Jesus promised him, “Amen, I say to you, today you will be with me in paradise” (Lk 23:43). On the other side, soldiers smash the legs of the rebuking thief to ensure his execution is complete.

And a centurion on horseback prays with folded hands. He witnessed what happened to Jesus and glorified God saying, “This man was innocent beyond doubt” (Lk 23:47).

Holy Week is a journey through the Passover of Jesus in his agony, his death on the cross and descent into hell, to share in the joy of his resurrection, by which Jesus, as the Catechism of the Catholic Church states, “crushed death, (permeating) with its powerful energy our old time, until all is subjected to him” (No. 1169).

In the right panel, Jesus descends into hell. Clothed in radiant golden light, Jesus holds a banner indicating his victory over sin and death through the cross.

He stamps underfoot the door of hell crushing the evil one beneath it. The multitude in the abyss of darkness look up with hope as Jesus reaches out to hold the hand of Adam, as patriarchs and prophets await liberation.

Above God the Father extends his right hand in blessing. And on the right, directing our gaze to the victorious Jesus is the haloed John the Baptist holding a banner that reads, “Behold the Lamb of God.” This is our Easter faith, and we are proud to profess it!

(Jem Sullivan is associate professor of catechetics in the School of Theology and Religious Studies at The Catholic University of America. She is the author of “The Beauty of Faith: Christian Art and the Good News.”)