Being altar server is call to prayer and mission, pope says - Catholic Courier 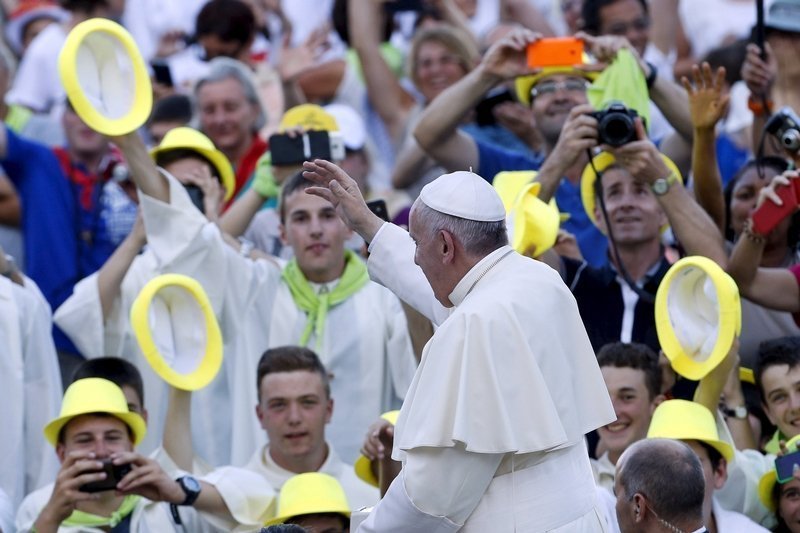 Pope Francis waves as he arrives to attend an audience with some 9,000 altar servers in St. Peter's Square at the Vatican Aug. 4.
By Cindy Wooden
Catholic News Service
VATICAN CITY (CNS) — Catholics are more fortunate than the Old Testament prophets were because in the Eucharist they experience Jesus’ closeness and know that God is not far off on a lofty throne, Pope Francis told thousands of altar servers from across Europe.
"In the Eucharist and in the other sacraments," the pope said, "you experience the intimate closeness of Jesus, the sweetness and power of his presence."
Pope Francis ended his three-week summer vacation at the evening meeting and prayer Aug. 4 with some 9,000 altar servers. The largest groups of young men and women came from Austria, Germany and Italy.
The pope thanked the young people for braving Rome’s August heat, although they did find some relief before the pope arrived. They began gathering in
St. Peter’s Square about three hours earlier when the sun was still at its strongest. To deal with the high summer temperatures in the square, the young people stood under showers of cooling water provided by the hoses of the Vatican fire department.
The theme of the gathering was "Here I am! Send me" from the prophet Isaiah.
"You are more fortunate today than the prophet Isaiah," Pope Francis told the youths. In the Eucharist, Jesus is not "placed on an inaccessibly high throne, but in the bread and wine."
Isaiah was purified and forgiven by God and sent to bring God’s word to others, the pope said. "Isaiah realized that, by entrusting himself into the hands of the Lord, his whole existence would be transformed."
God’s word, the pope said, "does not shake the doorposts, but rather caresses the strings of the heart."
Like Isaiah, Christians recognize that "it is always God who takes the lead, because it is he who created you and willed you into being," the pope said. "It is he who, in your baptism, has made you into a new creation; he is always patiently waiting for your response to his initiative, offering forgiveness to whoever asks him in humility."
God’s call, the pope said, is a call to go out and share God’s mercy and the joy of faith. It cannot be lived or protected "in an underground bunker to which we flee in difficult moments."
Serving at the altar, the pope told the young people, is a privileged way to draw closer to Jesus, which in turn "enables you to open yourselves to others, to journey together, to set demanding goals and to find the strength to achieve them."
"The closer you are to the altar," he told them, "the more you will remember to speak with Jesus in daily prayer; the more you will be nourished by the word and the body of the Lord, the better able you will be to go out to others, bringing them the gift that you have received, giving in turn with enthusiasm the joy you have received.
Copyright © 2022 Catholic News Service, Inc. All rights reserved. Linking is encouraged, but republishing or redistributing, including by framing or similar means, without the publisher's prior written permission is prohibited.