PITTSFORD — For several minutes, a slice of cake sat untouched in Sister Angela Sutula’s lap — not because it didn’t taste good or she wasn’t hungry. She was simply too busy greeting a stream of well-wishers who pressed forward to take pictures, extend handshakes or hugs, or sit and chat for a few minutes.

"Oh, I can’t believe it," she exclaimed.

Apparently, this is the price one must pay for possessing an endearing and enduring personality. But Sister Sutula didn’t mind the fuss one bit.

On Sept. 30, the great room at the Sisters of St. Joseph Motherhouse was packed with fellow sisters and many other folks whom Sister Sutula has befriended over the course of several decades. She greeted her visitors by pointing at them and smiling broadly for each one, cracking several jokes along the way. For instance, when she saw a reporter draw near, Sister Sutula adopted a look of mock alarm and quipped, "I’m going to watch my words."

As a boisterous rendition of "Happy Birthday" concluded, the guest of honor cheered right along with everyone else. Incidentally, there was no need to follow up with a chorus of "How Old Are You." Everybody knew Sister Sutula’s age, which is now in the triple digits. The afternoon party fell right on her 100th birthday, and signs were on display all over the motherhouse announcing that fact.

As attendees shared stories of their connections with Sister Sutula, it became clear that the centenarian nun has bestowed sunshine wherever she has ministered. 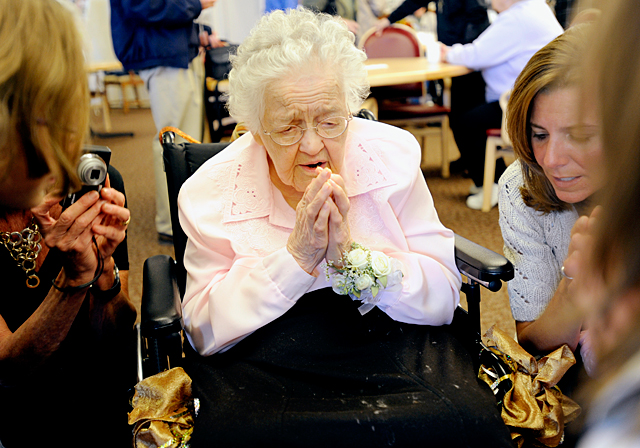 Sister Sutula prays with friends and family members during her Sept. 30 birthday celebration.

In 1974 Sister Sutula became the pastoral assistant at St. Patrick in Mount Morris, a position she held for 11 years. She went on to perform similar ministry at St. Joseph Parish in Wayland from 1985 until her retirement in 1994.

"When she was in Mount Morris, she used to ride her bicycle to visit the sick and homebound," noted Sister Kay Heverin, one of the SSJ motherhouse’s coordinators.

"Every place she went, she left them laughing when she left," said Sister Marie Stanislaus Chwalek, who taught with Sister Sutula at St. Stanislaus and was reunited with her when both served at St. Joseph in Wayland. As a testament to Sister Sutula’s penchant for having a good time, Sister Chwalek added that Sister Sutula "attended every bingo game."

Sister Sutula acquired the nickname "Bouncy" during her teaching years, and that vivaciousness has apparently carried over into retirement. While residing at the motherhouse’s former location on East Avenue (a new facility went up on French Road in 2002), Sister Sutula became a special friend of the late Bishop Joseph L. Hogan, visiting with him every day. He came up with a new nickname as a tribute to her personality: "Bubbles."

Sister Sutula gets around by wheelchair these days yet her bounciness and bubbliness is still evident, said Patty Janiak, a parishioner of St. Rita in Webster who has provided volunteer duty for Sister Sutula’s care since 1998. For instance, Janiak said Sister Sutula will grab the hands of anybody she meets and lead them in a cheer — "rah, rah, rah, boom, boom, boom" — before sharing prayers with them while continuing to hold hands.

"When I leave here on Saturdays, I feel like I’ve had a little bit of heaven," Janiak remarked.