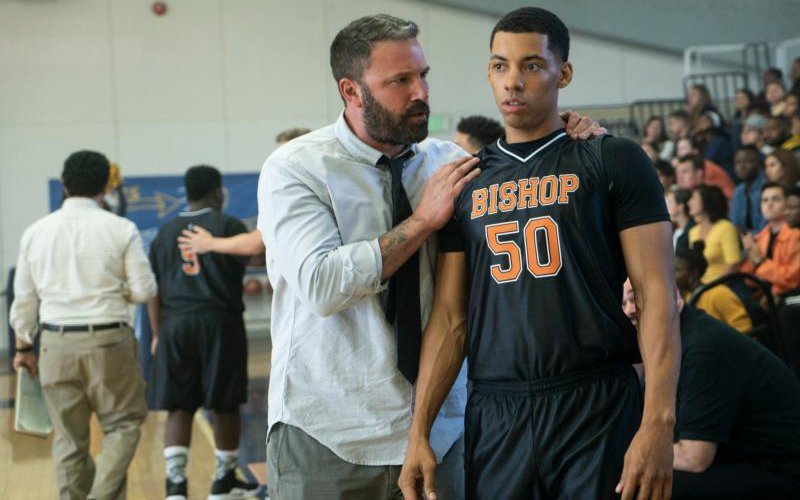 Ben Affleck and Melvin Gregg star in a scene from the movie "The Way Back." (CNS photo by Richard Foreman/Warner Bros. Entertainment)

NEW YORK (CNS) — Whose life doesn’t involve a crazy mixture of heartbreak and joy, despair and hope, death and life, weakness and redemption? Jack Cunningham (Ben Affleck), the protagonist of the sports drama “The Way Back” (Warner Bros.), can surely relate to all those shared highs and lows.

We first meet construction worker Jack as a hopeless drunk, putting a can of beer in his shower caddy at home, another brew or harder stuff in his coffee mug at work, and going through a whole case in one night. When he shows up at his sister Beth’s (Michaela Watkins) home for Thanksgiving, he already has a drink in hand.

Yet, by contrast, he shows himself a doting uncle, reading bedtime stories to his young nephew. When Beth confronts him about his isolation, she also tells him that his wife, Angela (Janina Gavankar), called her, worried about him. We later learn that Jack and Angela are still married but have separated after a devastating family loss.

When the basketball coach at the Catholic high school he attended suffers a heart attack, former hoops star Jack is asked to take over the program. His alcohol-fuddled brain comes up with tons of excuses as to why he can’t do this. But, surprisingly, he shows up at the gym for practice the next day and is introduced to the team by the assistant coach, Dan (Al Madrigal).

Jack is less than impressed by what he sees. The team’s stats are awful. They “couldn’t hit the ocean from the beach,” as Jack puts it.

As penned by Brad Ingelsby, director Gavin O’Connor’s film is permeated with the kind of off-color language that might be overheard in a locker room. Unlike many other movies, though, the swearing in “The Way Back” isn’t gratuitous. Instead it serves as a symptom of Jack’s deep suffering.

Thus, as he works with the players, finds a new sense of purpose and begins to heal, his instances of mouthing off diminish — although they don’t disappear completely. Jack’s vocabulary becomes an issue for the team’s chaplain, Father Mark (Jeremy Radin), who reminds him that swearing is against the school’s code of conduct.

This leads to an amusing exchange between the two. Angered during a match, Jack gives forth an expletive, only to get the “hairy eyeball” from Father Mark. “I’m working on it,” Jack responds, reining in his frustration. “Work harder,” the chaplain curtly replies.

The movie’s depiction of Jack’s recovery is so unrealistic as to be unsettling. He goes cold turkey without any support from others. However, the script does at least demonstrate that Jack’s path back to a fulfilling, happy life is not free of pitfalls — nor is his deliverance from dependency a one-and-done deal unmarred by setbacks.

At one point, Dan tells Jack not to underestimate the influence he can have in the lives of kids on the team. And this is borne out as the story progresses.

Jack helps Brandon (Brandon Wilson) come out of his shell and live up to his potential for leadership. Similarly, Jack guides Marcus (Melvin Gregg) — who has previously just skidded by using his natural charisma — to take responsibility for himself and his actions.

“The Way Back” does nothing to break free of the traditional formula of sports movies, and these aspects of the plot are highly predictable. Yet Affleck carries the proceedings with able acting and the younger members of the cast, especially Wilson, give believable performances as well.

Catholic viewers will appreciate the parochial-school setting, although faith doesn’t play a big part in Jack’s journey or those of the other characters. What “The Way Back” does provide, however, is hope. Jack’s redemption shows that no matter how much suffering life throws at us, we can once again experience love if we simply remain open to it.