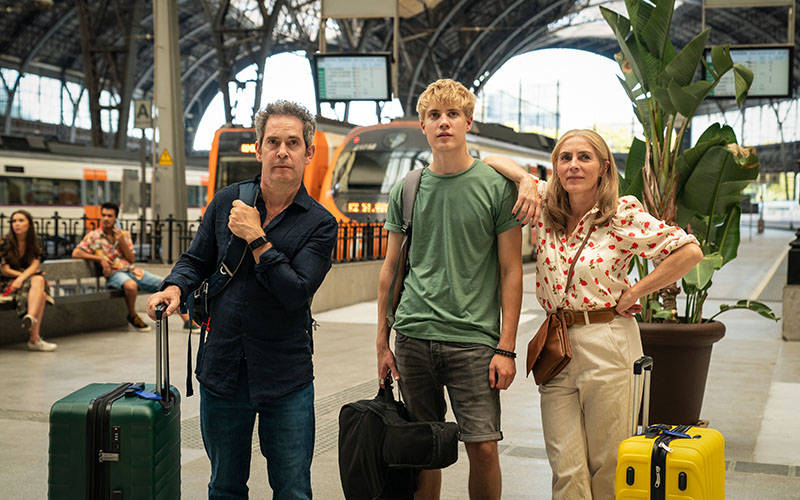 Tom Hollander, Tom Taylor and Saskia Reeves star in the TV show “Us” airing on PBS June 20 and 27, 2021. (CNS photo by Colin Hutton/Drama Republic and MASTERPIECE via PBS)

NEW YORK (CNS) — British author David Nicholls has adapted his best-selling 2014 novel “Us” into a miniseries.

Despite the book’s prestige — it was nominated for the highly regarded Booker Prize — its small-screen version, while offering a few funny and poignant moments, conveys some regrettable messages about marriage.

Having aired on the BBC in September 2020, the “Masterpiece” presentation debuts on PBS Sunday, June 20, 9-11 p.m. EDT. It concludes a week later in the same time slot. Schedules may differ, however, so viewers should consult local listings.

After 20 years of matrimony, former artist Connie Petersen (Saskia Reeves) is ready to split from her husband, Douglas (Hollander), a pharmaceutical executive. “Don’t you think our work is done?” she asks him. “It wasn’t work,” he says. “It was to me,” she answers.

But the couple faces a conundrum: What to do about a family tour through Europe they’ve planned, an extended sojourn Douglas calls “the trip of a lifetime”?

Connie suggests going ahead with the journey. Though Douglas initially disagrees, he comes to think of the vacation as an opportunity to mend fences with Connie. Divorcing her is the last thing Douglas wants to do.

It’s important to both spouses that their 17-year-old son Albie (Tom Taylor), who’s slated to start college shortly, will be accompanying them. His presence, however, turns out to be a source of further conflict.

In Amsterdam, Albie meets free-spirited street performer Kat (Thaddea Graham) and brings her to breakfast at the hotel where he and his parents are staying. When Kat gets into a dispute with other patrons there, Albie intervenes, throwing food at his new pal’s adversaries.

Instead of defending Albie, Douglas apologizes for his son’s embarrassing behavior, prompting both Albie and Kat to bolt. Believing that her husband should have taken their son’s side, Connie returns to England. For Douglas, though, what had been a last-ditch chance to save his marriage morphs into a desperate quest to reconnect with Albie.

Mature topics referred to in the show include adultery and homosexuality. Combined with implied sexual activity, occasional off-color language and some illicit drug use, such themes preclude endorsement for any but grown viewers.

They’ll discover that the program is not without its strong points. “Us” was shot on location, for instance, and Ed Rutherford’s burnished cinematography will likely have viewers longing to do some traveling of their own.

Performances are impressive across the board. Yet Hollander’s sympathetic portrayal of a man fighting his own temperament to save his family stands out.

Thus, while talking to Connie on his cellphone, Douglas — overwhelmed by the feeling that everything around him is unraveling — says poignantly, “I can’t live in the moment when it’s too hard. It’s too confusing.”

Hollander, as a result, will have the audience rooting for Douglas as he struggles to save his bond with Connie. All the more so since her attitude toward divorce is so casual as to be flippant. “Now,” she says to Douglas at one point, “you can be my fine, brilliant ex-husband.”

Such frivolousness may accurately reflect contemporary attitudes. But it’s equally true that some marriages emerge stronger after a crisis — a positive reality wholly ignored in “Us.”