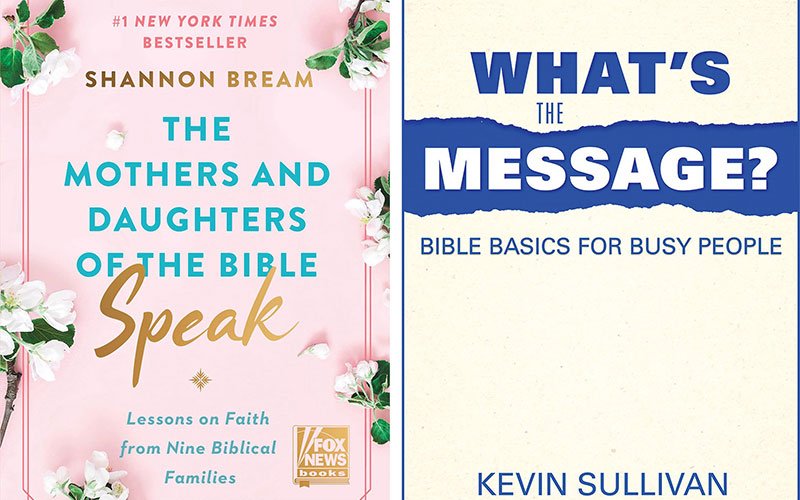 These are the book covers of "The Mothers and Daughters of the Bible Speak: Lessons on Faith from Nine Biblical Families" by Shannon Bream; and "What's the Message? Bible Basics for Busy People" by Kevin Sullivan. The books are reviewed by Eugene J. Fisher. (CNS photo courtesy Broadside Books and Paulist Press)

These two books are for all Catholics. Each offers insights into the Bible and how we can meaningfully understand its relevance for our daily lives. I recommend the Bream book most highly. Many readers will like the Sullivan book, which I can recommend with one strong caveat.

Bream interweaves her narrations of the biblical stories with reflections on her own life experiences, which helps readers to immerse themselves in the stories she tells. In this way, the reader is gently led to thinking about the biblical women and men that she presents as models, guides and in some cases warnings about the decisions we make in our own lives. Bream is the author of a New York Times bestseller, “Women of the Bible Speak,” and is the chief legal correspondent for Fox News.

The book is divided into three sections, each of which has study questions that can also serve as discussion starters for groups who may be reading and discussing the book together:

— Mothers and daughters, in which she tells the stories of Jochebed and Miriam, Ruth and Naomi, and Elizabeth and Mary.

— Mothers and sons, presenting the lives of Rebekah, Bathsheba and Mary the mother of Jesus.

— Daughters and fathers, which focuses on Dinah, Esther and Michal.

It concludes with another reflection on mothers and daughters, focusing on the Book of Kings and the Gospel of Mark. Each section concludes with a prayer that readers may recite and meditate upon.

As a biblical scholar, I was aware of these stories. But Bream’s approach, speaking from within her understanding of women, consistently gave me new and deeper insights into the characters, the stories and their meaning for my life and for the lives of all Catholics, indeed all Christians.

Jews reading her presentations of the stories from their Bible, the Hebrew Scriptures, may gain insights as well and into the life and teaching of the Jew, Jesus, who lived and died a faithful Jew of his time. Frankly, I was drawn into this book very deeply by the simplicity and depths of its narrations and, once again, recommend it most highly to all readers of all ages.

Msgr. Kevin Sullivan, the author of “What’s the Message?,” is CEO of Catholic Charities of the Archdiocese of New York. As such he has had deep contacts with ordinary people and with many people in need. His book first quotes key biblical passages (which takes up about half of the book) and then comments on them in a colloquial, folksy way seeking to bring out the deeper meaning of each for ordinary people.

Many readers will enjoy this humorous approach and learn from it. Others may not. But the book is certainly worth checking out if one wants a quick and lively approach to the Bible.

My caveat comes in Chapter 6 in which “all the chief priests and the elders of the people conferred together against Jesus in order to bring about his death,” and join together to force Pilate to crucify him lest a riot break out (Pages 44-45), repeating this on Page 51: “You Israelites crucified Jesus,” citing Acts.

The problem is this ignores the fact that Pilate appointed and totally controlled the chief priests. They had to do whatever he told them to do. It was Pilate and Pilate alone who had the power to order the crucifixion of Jesus, which he did, on his own. As our creed rightly states, Jesus suffered and died under Pontius Pilate with no reference to Jewish involvement.

The reason that presenting the death of Jesus as the result of Pilate’s decision is that the notion that “the Jews” killed Jesus was the basis for centuries of the ancient Christian teaching of contempt for Jews and Judaism. Jews were blamed for all social ills, even scapegoated if the water in wells went bad. They were persecuted.

Ultimately, the Nazis changed the teaching of contempt into a racial slur, antisemitism, and used it to justify rounding up the Jews of Europe and sending them to the death camps. Interestingly, many Italian Catholics hid Jews in their homes, monasteries and convents, saving many, though they could not save the 6 million.

The Second Vatican Council in “Nostra Aetate” clearly and definitely rejected the false claim that “the Jews” were (and are) collectively guilty for the death of Jesus. Msgr. Sullivan’s treatment obfuscates this sacred Catholic teaching. So this section of his book, in my opinion, should be rewritten in a new edition to better conform to official Catholic teaching.

Fisher is a professor of theology at St. Leo University in Florida.