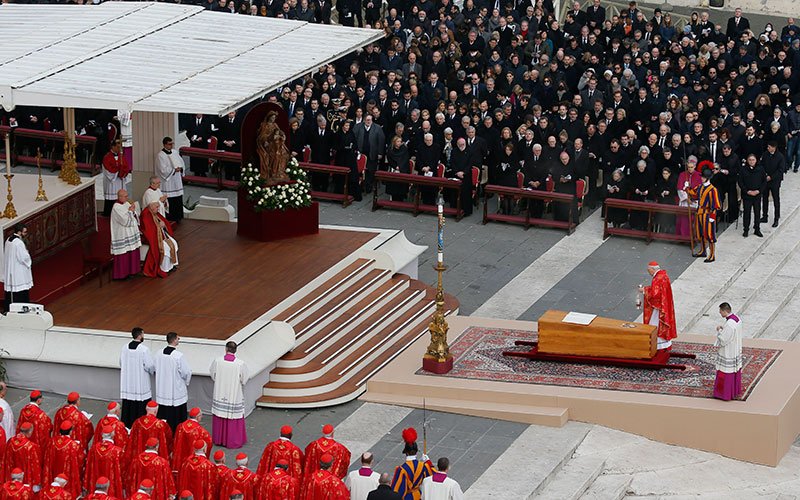 Cardinal Giovanni Battista Re, dean of the College of Cardinals, blesses the remains of Pope Benedict XVI with incense as Pope Francis looks on in St. Peter's Square at the Vatican Jan. 5, 2023. (CNS photo by Paul Haring)

WASHINGTON (OSV News) — President Joe Biden did not attend the funeral of Pope Emeritus Benedict XVI Jan. 5 and instead sent U.S. Ambassador to the Holy See Joe Donnelly to represent his administration and the United States.

The decision came after the Vatican discouraged the attendance of official state delegations due to the late pontiff’s preference for simplicity in his funeral arrangements.

Biden met Pope Benedict when he served as vice president

In remarks to reporters at the White House Jan. 4, Biden, who is Catholic, spoke fondly of his opportunity to meet with Pope Benedict during his time as vice president, saying, “it reminded me of going back to theology class.”

“We spoke about Aquinas and about ‘Summa Theologica’ and the whole litany,” Biden said. “I found him to be relaxing and very rational.”

Biden said Pope Benedict had “a more conservative view within the Catholic realm than I have,” but added, “I admired him. I thought he was a fine man.”

Asked why he would not attend the former pontiff’s funeral, Biden cited the sheer production involved in presidential travel, and said that the level of attention would have been contrary to Benedict’s wishes.

“The reason I’m not attending the funeral tomorrow is because it takes an entourage of a thousand people to show up, not literally,” Biden said, “But we would — we would move everything in the wrong direction.”

Biden said he “inquired about” attending the funeral, but that “people are sending mostly their apostolic delegates … the folks in Rome.”

Since retired Pope Benedict was no longer a head of state when he died, the Vatican did not encourage the attendance of other heads of state, with only official delegations from Italy and the late pontiff’s native Germany attending.

Some leaders attended in an unofficial capacity, including Queen Letizia of Spain as as well as Polish President Adrzej Duda and Prime Minister Matuesz Morawiecki.

Tags: Pope Benedict XVI
Copyright © 2023 OSV News / Our Sunday Visitor, Inc. All rights reserved. Linking is encouraged, but republishing or redistributing, including by framing or similar means, without the publisher's prior written permission is prohibited.