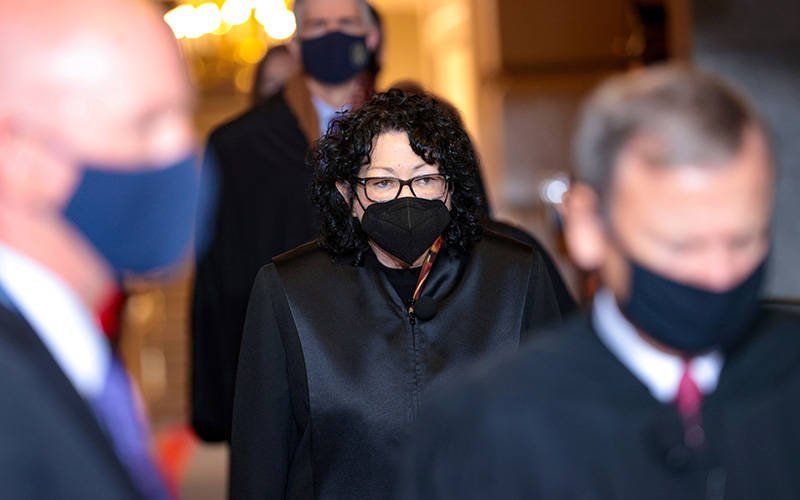 U.S. Supreme Court justices arrive at the 59th Presidential Inauguration in Washington Jan. 20, 2021, for the swearing in of President Joe Biden, the second Catholic to hold that office. Biden has established a commission to study the possible expansion of the Supreme Court. (CNS photo by Win McNamee, pool via Reuters)

WASHINGTON (CNS) — President Joe Biden signed an executive order April 9 announcing the formation of a commission to look into possible reforms to the Supreme Court, including the idea of expanding the court or instituting term limits for justices.

The 36-member commission of mostly law school professors, includes two professors from law schools at Catholic universities. The group is to spend 180 days studying potential changes to the court, holding public meetings and writing up a report at the end. The members were not charged with making a formal recommendation, but instead are to provide an overview of the pros and cons of making changes to the nation’s high court.

The White House statement on the commission said its purpose is “to provide an analysis of the principal arguments in the contemporary public debate for and against Supreme Court reform, including an appraisal of the merits and legality of particular reform proposals.”

Biden first mentioned the idea of this type of commission during the presidential campaign last fall after the death of Justice Ruth Bader Ginsburg and her replacement on the bench was quickly filled by Justice Amy Coney Barrett making the court comprised of six justices nominated by Republican presidents.

Although he didn’t often directly respond to questions about expanding the court, Biden has said he is “not a fan” of adding additional seats as a means to provide more of an ideological balance.

In an interview with Norah O’Donnell on CBS’s “60 Minutes” last fall, he said: “The last thing we need to do is turn the Supreme Court into just a political football, whoever has the most votes gets whatever they want. Presidents come and go. Supreme Court justices stay for generations.”

The Catholic law school professors in the group are Caroline Fredrickson, a visiting professor at Georgetown University’s Law School, and Michael Ramsey, law professor at the University of San Diego.

Fredrickson is a senior fellow at the Brennan Center for Justice at New York University Law School and the former president of the American Constitution Society which describes itself on its website as a leading legal progressive organization. Ramsey has written several books and scholarly articles on the courts and law.

After the commission was announced, Senate Republican leader Mitch McConnell criticized it in a statement saying it was “a direct assault on our nation’s independent judiciary and another sign of the far-left’s influence over the Biden administration.”

The commission’s announcement also has drawn attention to the potential retirement of Justice Stephen Breyer, 82.

Just three days before the Biden announcement, Breyer gave a speech at Harvard Law School in which he warned against making big changes to the Supreme Court, including adding more justices to the bench. He said the court’s authority relies on a trust “guided by legal principle, not politics” and added that advocates proposing changes should think “long and hard” about it.

In an April 9 news conference, White House press secretary Jen Psaki said the president will wait for the commission to finish its work before weighing in about the court’s size.

Adding to the number of Supreme Court justices, which has been nine since just after the Civil War, would require congressional approval.

Richard Garnett, law school professor at the University of Notre Dame and director of the university’s Program on Church, State and Society, commented on Twitter April 10 that it was no surprise he was not invited to serve on the president’s commission reviewing the court.

“If asked, I’d strongly support a mandatory retirement age for all non-elected public employees (including Article III judges … and professors!)” he tweeted.