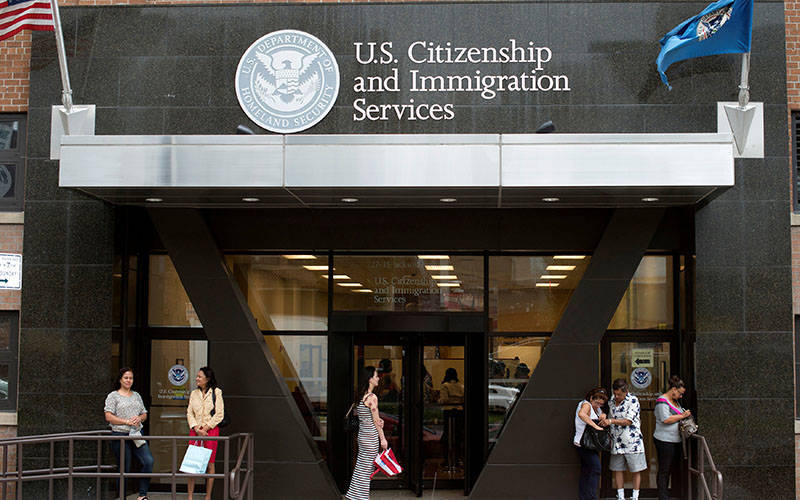 People in New York City stand on the steps of the U.S. Citizenship and Immigration Services office Aug. 15, 2012. (CNS photo by Keith Bedford/Reuters)

President Joe Biden announced Feb. 24 a reversal of a 2020 proclamation by the Trump administration that sought to keep those applying for permanent residency cards, popularly known as green cards, out of the country because of the pandemic.

The Trump administration said last year it was taking the action to protect U.S. workers who had lost jobs because of the coronavirus crisis. In the reversal, Biden said the action did not “advance the interests of the United States.”

“To the contrary, it harms the United States, including by preventing certain family members of United States citizens and lawful permanent residents from joining their families here. It also harms industries in the United States that utilize talent from around the world,” the new proclamation said.

Catholic organizations and institutions criticized the Trump proclamation when it was announced last year.

Catholic Legal Immigration Network Inc. called it a “thinly veiled attempt to use the COVID-19 pandemic and its economic fallout as cover for the administration’s racist, anti-immigrant agenda.”

The U.S. Conference of Catholic Bishops also opposed it, saying there was “little evidence that immigrants take away jobs from citizens and that “immigrants and citizens together are partners in reviving the nation’s economy.”

The move is the latest action by Biden to undo a flurry of immigration restrictions put in place by his predecessor’s administration.

Almost from the moment he took office, Biden reversed President Donald Trump’s “Muslim ban” keeping people from some Muslim-majority countries from entering the U.S. He also strengthened a program for young adults who entered the U.S. illegally as children, a program Trump tried to end.

Biden also announced a 100-day halt on deportations and has unveiled a preliminary plan to provide a path to citizenship for 11 million unauthorized immigrants.