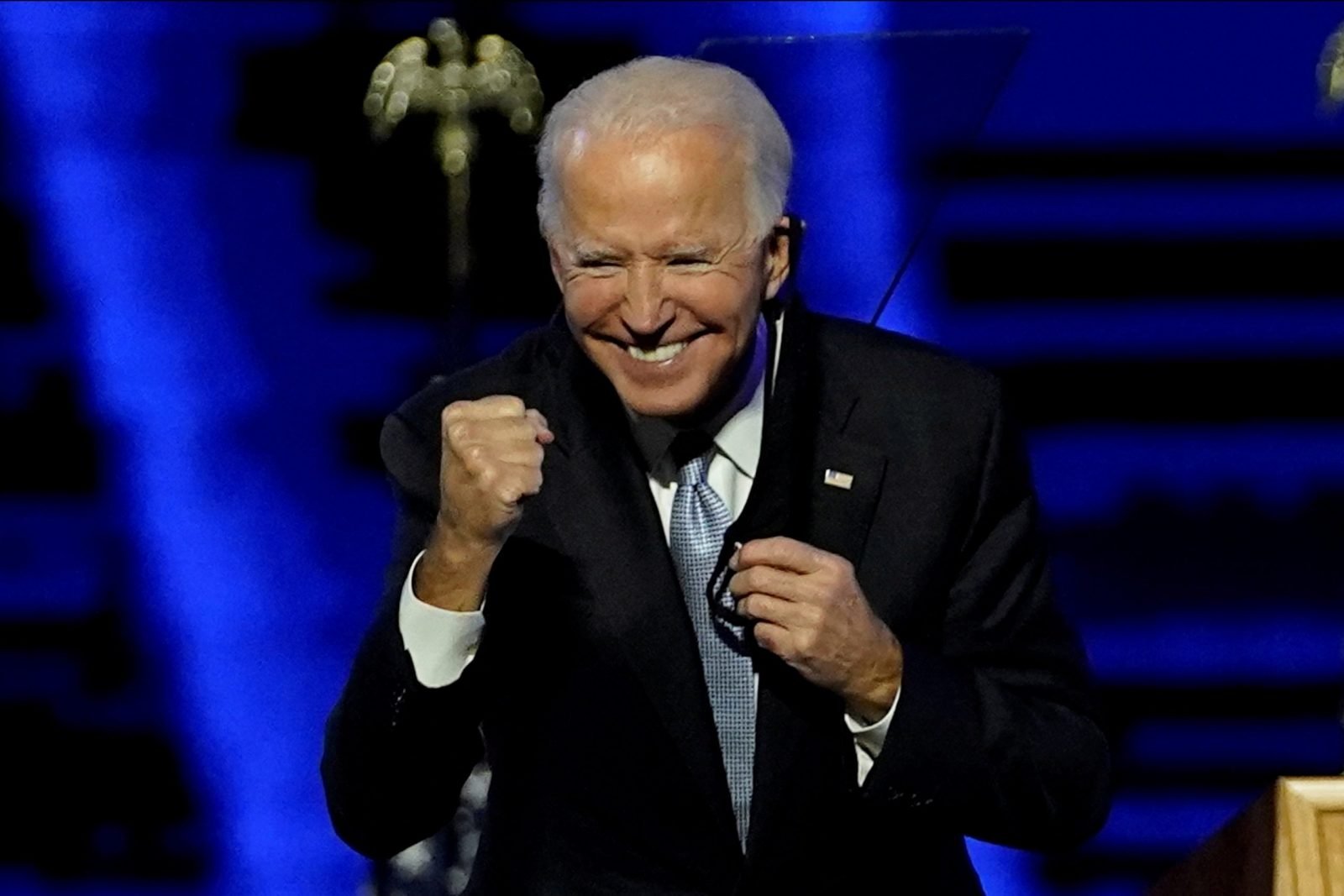 WILMINGTON, Del. (CNS) — President-elect Joe Biden told hundreds of supporters in Wilmington that he pledged “to be a president who seeks not to divide but unify” and “who doesn’t see red states and blue states — only the United States.”

He will work with “all my heart, with the confidence of the whole people, to win the confidence of all of you,” he said in an evening speech Nov. 7. “And for that is what America I believe is about. It’s about people. And that’s what our administration will be all about.”

Biden addressed the crowd hours after the media declared him the winner of the 2020 election. AP reported he had won Pennsylvania’s 20 electoral votes, which put him over the 270 electoral-vote-threshold needed to secure a victory.

“I sought this office to restore the soul of America, to rebuild the backbone of this nation, the middle class,” Biden said, “and to make America respected around the world again. And to unite us here at home.

“It’s the honor of my lifetime that so many millions of Americans have voted for that vision. And now, the work of making that vision is real, it’s a task — the task of our time.”

In the meantime, President Donald Trump and lawyers with his campaign have filed lawsuits in Pennsylvania, Nevada, Georgia, and Michigan — states where Biden has a slim margin over his Republican challenger.

The president, with 214 electoral votes, has yet to concede the race, for which his critics, even some Republicans, have harshly criticized him. But his supporters, including Sen. Ted Cruz, R- Texas, and Sen. Lindsey Graham, R-South Carolina, said Trump has a constitutional right to take his grievances to the courts.

In Wilmington, Biden thanked his family members for their support, including wife Jill, son Hunter, daughter Ashley, and his grandchildren and their spouses.

He called it an honor to be serving with such a “fantastic vice president,” noting Harris is making history “as the first woman, first black woman, the first woman from South Asian descent, the first daughter of immigrants ever elected in this country.

He also thanked all who volunteered for his campaign and to work at the polls amid the pandemic, and he praised local elected officials.

“I’ll work as hard for those who didn’t vote for me as those who did,” he added. “Let this grim era of demonization in America begin to end here and now. The refusal of Democrats and Republicans to cooperate with one another, it’s not some mysterious force beyond our control.”

He said America is currently at “an inflection point,” like it has been at other times in its history. These points are shaped, he said, “by moments in time where we’ve made hard decisions about who we are and what we want to be: Lincoln in 1860 coming to save the union. FDR in 1932 promising a beleaguered country a new deal. JFK in 1960 pledging a new frontier, and 12 years ago, when Barack Obama made history, he told us, ‘Yes, we can.'”

The country has “an opportunity to defeat despair, to build a nation of prosperity and purpose. We can do it. I know we can,” he remarked.

Biden said in the last days of his campaign, he was thinking about “a hymn that means a lot to me and my family, particularly my deceased son, Beau. It captures the faith that sustains me and which I believe sustains America”: ‘On Eagles Wings,” by Father Michael Joncas, a professor at the University of St. Thomas in St. Paul, Minnesota.

“And he will raise you up on eagles’ wings, bear you on the breath of dawn, and make you to shine like the sun and hold you in the palm of his hand,” said Biden quoting from the song, which he hoped would bring “comfort and solace” to the thousands of Americans who have lost a loved one because of COVID-19.

“And now together on eagles’ wings,” Biden concluded, “we embark on the work that God and history have called us to do with full hearts and steady hands, with faith in America and in each other, with love of country, a thirst for justice. Let us be the nation that we know we can be. A nation united, a nation strengthened, a nation healed.”