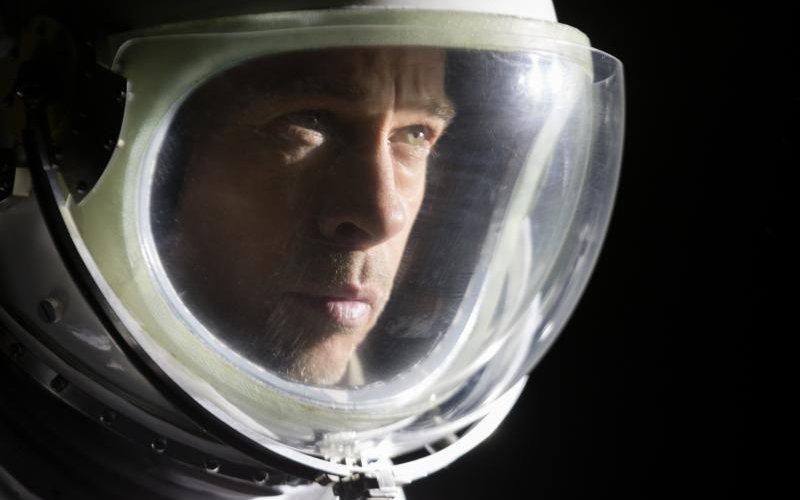 Brad Pitt stars in a scene from the movie "Ad Astra." (CNS photo by Fox)

NEW YORK (CNS) — The year 2019 saw the release of quality films across a wide range of genres, from a comic book-based extravaganza and a family drama about a Chinese American clan to a crackerjack murder mystery.

Family-friendly fare, meanwhile, saw extensions to popular franchises, the polished adaptation of a classic 19th-century novel and the updating of a much older literary stalwart: the story of Camelot.

When it comes to the top 10 movies overall:

In the compelling sci-fi drama “Ad Astra,” an astronaut (Brad Pitt) goes on a quest to communicate with his father (Tommy Lee Jones), a pioneer space traveler who long ago disappeared during a mission to search for extraterrestrial life from the outer boundaries of the solar system. By turns an epic and an intimate character study, director and co-writer James Gray’s moody film features several brief scenes of prayer that will intrigue believers. (A-III, PG-13)

Chronicling the events of June 17, 2015, when a gunman opened fire during a Bible study being conducted at the Emanuel African Methodist Episcopal Church in Charleston, South Carolina, the moving documentary “Emanuel” celebrates the lives of the victims as well as the love and forgiveness demonstrated by the survivors and family members toward the perpetrator. Filmmaker Brian Ivie focuses not on the racial hatred that motivated the shootings, but on the faith-filled response of the people most affected by the tragedy. (A-II, not rated)

In “The Farewell,” cultural difference lead to family tension as a young Chinese American aspiring writer (rapper Awkwafina) learns that her much-loved grandmother (Shuzhen Zhou) has been diagnosed with terminal cancer and that her parents (Tzi Ma and Diana Lin), along with her other relatives, intend to keep the dying woman in the dark about her condition, a decision with which the daughter vehemently disagrees. Writer-director Lulu Wang, basing her film on personal experiences, skillfully lightens her thoughtful drama by combining it with a comedy of manners. The delicate result is deep in insight and rich in emotion. (A-III, PG)

In the fact-based drama “Ford v Ferrari,” director James Mangold, working from a screenplay by brothers Jez and John-Henry Butterworth and Jason Keller, keeps the story stripped down to the competition between automakers Ford (led by Tracy Letts and Jon Bernthal) and Ferrari (its namesake founder played by Remo Girone) to have their cars win the grueling 24-hour Le Mans road race in 1966. Car developer Carroll Shelby (Matt Damon) and daredevil British driver Ken Miles (Christian Bale) fight off their personal troubles to form a successful partnership in which they also keep the corporate types at bay. (A-III, PG-13)

“Just Mercy” recounts how a Harvard educated lawyer (Michael B. Jordan) worked, with the help of a local activist (Brie Larson), to save the life of an Alabama death-row prisoner (Jamie Foxx) convicted on feeble evidence of the murder of an 18-year-old white woman. Director and co-writer (with Andrew Lanham) Destin Daniel Cretton’s adaptation of a 2014 memoir by Bryan Stevenson is a humane and winning study of a subject with immense real-world significance. (A-III, PG-13)

In the splendid comic whodunit “Knives Out,” a shrewd Southern detective (Daniel Craig) is hired by an anonymous client to investigate the death of a famous and wealthy crime novelist (Christopher Plummer). He seeks answers among the eccentric members of the deceased’s conflict-ridden family (Chris Evans, Jamie Lee Curtis, Michael Shannon, Don Johnson and Toni Collette, among others). He also enlists the help of the late author’s caring and sensible Latina nurse (Ana de Armas). Writer-director Rian Johnson’s richly entertaining ensemble homage to Agatha Christie has clever twist and turns, abundant humor and sly social commentary. Though strictly for grown-ups, it’s a brainy and satisfying movie. (A-III, PG-13)

“1917” is a gripping historical drama, set in the midst of World War I, in which two British soldiers (George MacKay and Dean-Charles Chapman) are dispatched across enemy territory to call off an attack by an officer (Benedict Cumberbatch) whose men are about to fall into a German trap. By turns harrowing and lyrically beautiful, and deeply humane throughout, director and co-writer Sam Mendes’ film displays both the horrors of trench combat and the endurance of fundamental decency and spiritual striving. It’s also luminous in its affirmation of the triumph of faith, broadly considered, over cynicism. (A-III, R)

In the heartwarming drama “The Peanut Butter Falcon,” a young man with Down syndrome (Zack Gottsagen) and no family to care for him escapes from a state institution and crosses paths with a down-on-his-luck crab fisherman (Shia LaBeouf). Directors and co-writers Tyler Nilson and Michael Schwartz handle their Southern Gothic-tinged story, which also features Dakota Johnson as a sympathetic caregiver, with a light and dexterous touch. The result is a an aesthetically accomplished, implicitly pro-life movie that subtly but resolutely upholds the dignity of all. (A-III, PG-13)

“Us” is a top-notch but bloody horror fantasy from writer-director Jordan Peele. A childhood encounter with an exact double of herself proves to be the far-off prelude to a California woman (Lupita Nyong’o), her husband (Winston Duke) and kids (Shahadi Wright Joseph and Evan Alex) being visited and terrorized by a malignant version of their family. There are frights aplenty in the struggle that follows as well as an allegory about economic inequality and perhaps slavery as well. Though clan closeness proves crucial to the outcome, the mayhem is too intense for a wide audience. (L, R)

And here are our top 10 family films:

The dreaded Yeti monster becomes a loveable furball in the animated adventure “Abominable,” directed by Todd Wilderman and Jill Culton. A resourceful teenager (voice of Chloe Bennet), aided by two friends (voices of Tenzing Norgay Trainor and Albert Tsai), embarks on an epic adventure across China to return the creature to his Himalayan home, away from the clutches of his wicked captors (voices of Eddie Izzard and Sarah Paulson). Along with eye-popping animation, roller-coaster action and good humor are worthy lessons on the importance of family, friendship and helping others in need. (A-I, PG)

In “The Angry Birds Movie 2,” the flightless avians (voices of, among others, Peter Dinklage, Josh Gad and Danny McBride) and crass green pigs (their leader voiced by Bill Hader) of the popular app must band together to stave off a threat from icy Eagle Island (its instigator voiced by Leslie Jones). The youngest audience members won’t understand all the jokes. But director Thurop Van Orman and screenwriter Peter Ackerman, eager to please, have seen to it that something inevitably comes along that they will. (A-II, PG)

“Breakthrough” is a faith-affirming drama, based on real events, in which a strong-willed mother (Chrissy Metz) refuses to accept that her adoptive son (Marcel Ruiz) is doomed to die after falling through the ice on a frozen lake and her desperate prayers have a startling impact on his seemingly hopeless prognosis. Director Roxann Dawson’s adaptation of Joyce Smith’s 2017 memoir “The Impossible” (written with Ginger Kolbaba) benefits from Metz’s driven performance and will have sympathetic viewers cheering her character on all the way. (A-II, PG)

“Dora and the Lost City of Gold,” directed by James Bobin, is that Hollywood rarity: a sunny, fun-filled movie with valuable lessons about kindness, friendship and tolerance. A teenage Dora (Isabela Moner) is sent to live with relatives while her archeologist parents (Eva Longoria and Michael Pena) set off in search of the fabled Incan site of the title. Before long, Dora, together with her cousin (Jeff Wahlberg) and two classmates (Madeleine Madden and Nicholas Coombe), is kidnapped by bandits eager to locate Ma, Pa and the treasure from which the location of their dig takes its name. The film’s few rough edges are compensated for by its much-needed presentation of positive role models for young people. (A-II, PG)

In “Frozen II,” a queen endowed with the magical power to create ice and snow (voice of Idina Menzel) hears a voice calling her into the wilderness beyond her realm and responds by embarking on a quest. She’s accompanied by her strictly human younger sister (voice of Kristen Bell), the iceman (voice of Jonathan Groff) who would like to make the junior sibling his own and a merry sentient snowman (voice of Josh Gad). Screenwriter and co-director Jennifer Lee and her partner at the helm, Chris Buck, deliver an exuberant animated musical adventure stressing teamwork, family solidarity and upright values. (A-II, PG)

The Arthurian legend gets an inventive updating in the thrilling adventure “The Kid Who Would Be King.” A 12-year-old (Louis Ashbourne Serkis) finds a sword stuck in a pile of rubble and pulls it out, unaware that the mythical Excalibur is now in his grasp. The fabled wizard Merlin (Angus Imrie in one guise, Patrick Stewart in another), promptly appears and warns that an army must be raised to oppose the resurrected, and evil, Morgana le Fay (Rebecca Ferguson). Writer-director Joe Cornish serves up an entertaining film that skillfully blends in strong messages about truth, justice and caring for others. (A-II, PG)

“Little Women” is an elegant, vibrantly emotional adaptation of Louisa May Alcott’s novel from writer-director Greta Gerwig. The familiar March sisters, Jo (Saoirse Ronan), Meg (Emma Watson), Amy (Florence Pugh) and Beth (Eliza Scanlen) — together with feckless suitor Laurie (Timothee Chalamet) –are presented in the format of a nonlinear memory play, with Jo, first shown as an adult writer, recalling the episodes that formed their characters and shaped their life decisions. Moviegoers who already love these characters will get the lush presentation they hope to see. And Gerwig’s occasional alterations prove she’s equally adept at accurate history and subtle moral messaging. (A-II, PG)

At once the profile of a plucky 5-year-old Adelie penguin the filmmakers dub Steve and an introduction to his species as a whole, the winning documentary “Penguins” tracks Steve as he finds a mate and starts a family in the challenging surroundings of Antarctica. The spectacle of his adventures among hundreds of thousands of others of his kind, skillfully directed by Alastair Fothergill and Jeff Wilson and often humorously narrated by actor Ed Helms, will prove a delight for viewers of every generation. (A-I, G)

“Tolkien,” a sophisticated profile of the future novelist’s youth, traces his passage from impoverished schoolboy (Harry Gilby) to Oxford University scholarship student and beleaguered officer in the trenches of World War I (Nicholas Hoult). Along the way, he bonds with a trio of precociously gifted peers (Anthony Boyle, Patrick Gibson and Tom Glynn-Carney) and falls for his future wife (Lily Collins). Director Dome Karukoski successfully conveys first the buoyant camaraderie that led the band of friends to regard themselves as brothers and later the horrors of the global conflict in which they were eventually caught up and the toll it exacted on them. (A-II, PG-13)

“Toy Story 4” is a delightful addition to the animated franchise in which the cowboy leader (voice of Tom Hanks) of the familiar gang of toys who come to life when humans aren’t looking becomes the mentor of a homemade doll (voice of Tony Hale) his kid owner (voice of Madeleine McGraw) fashioned primarily out of a plastic spork. Director Josh Cooley and screenwriters Andrew Stanton and Stephany Folsom deftly juggle humor, sentiment and even clever gothic material by way of the creepy ventriloquist dummies who populate an antiques store. (A-I, G)