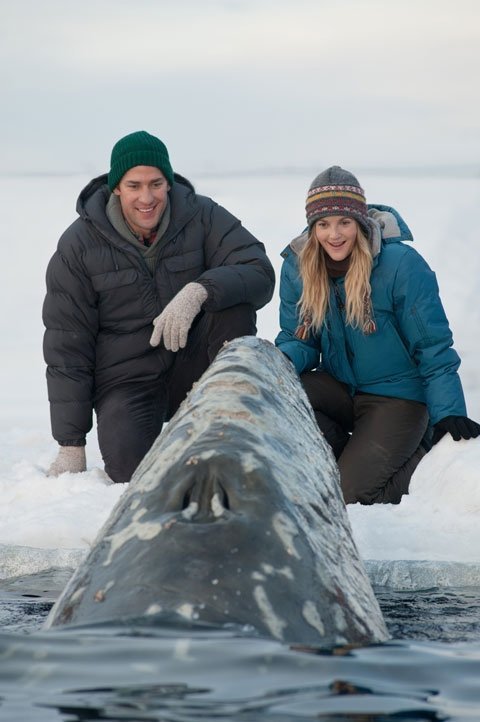 NEW YORK (CNS) — "Free Willy," the 1993 whale rescue film, looks like child’s play when compared to "Big Miracle" (Universal), in which not one but three giant mammals are trapped in Arctic ice, and it takes a whole lot more than a sleepy Alaskan town to save them.

Directed by Ken Kwapis — and based on the real-life events recounted in Thomas Rose’s 1989 book "Freeing the Whales" — the film is an animal rights activist’s dream. Families, neighbors, corporations, and even superpowers set aside their differences for a spell and work together, seeing in the innocent cetaceans a metaphor for peace and understanding.

It’s 1988, and television reporter Adam Carlson (John Krasinski) is biding his time in Alaska, hoping to land the really big story that will serve as his ticket to a better job in the Lower 48. Knocking about the desolate town of Barrow with local Inupiat boy Nathan (Ahmaogak Sweeney), Carlson stumbles on a hole in the offshore ice.

Within it he finds a headline waiting to happen: Peeking out as they surface for air is the cutest family of California gray whales you’ve ever seen, a clan Carlson eventually names after television’s Flintstones: Fred, Wilma, and Bamm-Bamm (not Pebbles, as the baby is a boy, you see).

Their migration south was halted due to freezing ice. Trapped five miles from open water, they’ll drown unless something is done to free them.

Carlson files his story — and catches the attention of NBC News anchor Tom Brokaw who is — so Jack Amiel and Michael Begler’s script informs us — "a sucker for these animal stories." Carlson’s piece is broadcast nationally, and overnight the world takes notice. The media descend on tiny Barrow, unprepared for the frigid conditions and lack of amenities.

Luckily for Carlson, his ex-girlfriend, Rachel Kramer (Drew Barrymore), runs the local chapter of Greenpeace. She badgers oil magnate J.W. McGraw (Ted Danson) to finance the release. She jumps into the icy waters to swim with Bamm-Bamm, the better to raise awareness. And she fends off the Inupiats, who want to harvest the whales for food, interpreting the creatures’ arrival as a gift from their traditional deity.

The rescue takes on an international dimension when the Reagan White House espies an opportunity to burnish its environmental record. The National Guard is called up and, in the spirit of glasnost, the Soviet Union is asked to bring in an icebreaker.

Whether President Ronald Reagan (Quinn Redeker) really picked up the phone and opened his conversation with Mikhail Gorbachev by saying, "Gorby? This is Ronnie!" remains, however, open to question.

Chilly relations thaw along with the ice as enemies cooperate, at least for a while: Greenpeace and big oil, Yanks and Russians all join in the effort, and both modern methods and native ways are brought to bear. As it recalls these unifying events, "Big Miracle" emerges as an inspiring and uplifting feature suitable for all but the youngest viewers.

The film contains a few mild oaths and one semi-profane expression. The Catholic News Service classification is A-II — adults and adolescents. The Motion Picture Association of America rating is PG — parental guidance suggested. Some material may not be suitable for children.