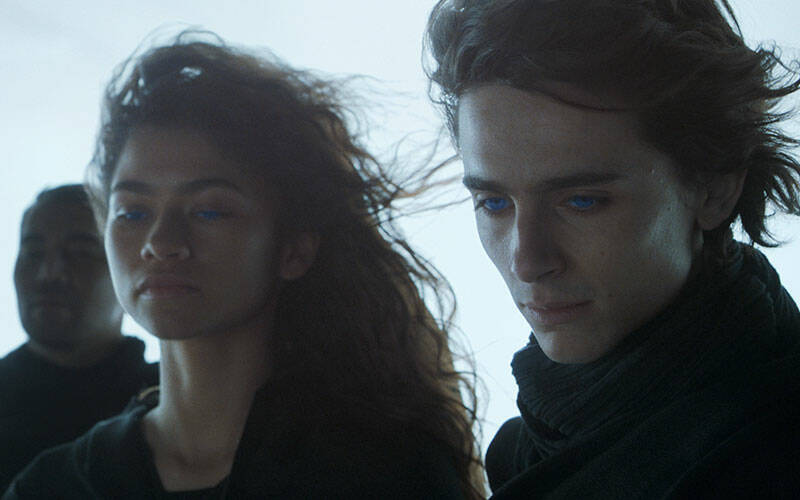 Zendaya and Timothée Chalamet star in a scene from the movie “Dune.” (CNS photo by Warner Bros.)

The 1965 novel by Frank Herbert on which it’s based is considered a classic of the genre — and may be its best-selling title of all time. Director David Lynch’s 1984 adaptation, on the other hand, was both a critical and box-office disaster.

It may have taken some courage, then, for the new version’s helmer and co-writer, Denis Villeneuve, to make a fresh bid at interpreting Herbert’s saga. Happily, he succeeds, thanks in large part to characters with whom it’s easy to sympathize and to a tone in the script Villeneuve penned with Jon Spaihts and Eric Roth that mostly manages to convey a sense of gravity without indulging in self-importance.

The plot centers on Paul Atreides (Timothée Chalamet). The heir to a powerful dynasty of intergalactic warriors, Paul also may be the messiah figure foretold in various prophecies.

After the ruler of the empire to which Paul and his family belong appoints his father, Duke Leto (Oscar Isaac), governor of the titular world — a desert planet rich in a highly-prized spice — the forces the duke commands get caught up in a battle for control of its population and resources. Their principal opposition comes from a rival clan, the villainous Harkonnen.

As the struggle unfolds, Paul seeks to emulate his sage and enlightened dad. But his priestess mother, Lady Jessica (Rebecca Ferguson), steers him toward a more mysterious destiny.

Combining elements of a costume drama, an against-the-odds quest and a parable about imperialism, the movie features a complex religious mythos requiring careful reflection on the part of viewers. There are hints, for instance, that the empire is vaguely Christian — some of its officials wear outfits reminiscent of liturgical vestments — while the inhabitants of Dune, aka Arrakis, seem quasi-Muslim.

As for the spiritual role Paul may eventually assume, it appears to align more closely with a combative military and political savior than with the suffering servant spoken of by Isaiah and highlighted in the New Testament. Paul and his mom — who, we learn, is Duke Leto’s concubine, not his wife — also share an occult ability to overcome other people’s free will.

Parents will probably find “Dune” acceptable for those older adolescents capable of sorting through such material. Like their elders, teen moviegoers will appreciate the straightforward dramatic appeal of Paul’s coming-of-age story while perhaps being inclined to let its slightly dicey transcendental elements slide.

The film contains nonscriptural beliefs, much stylized but sometimes intense violence, cohabitation, partial nudity, brief sexual references, a few mild oaths and at least one crude term. The Catholic News Service classification is A-III — adults. The Motion Picture Association rating is PG-13 — parents strongly cautioned. Some material may be inappropriate for children under 13.