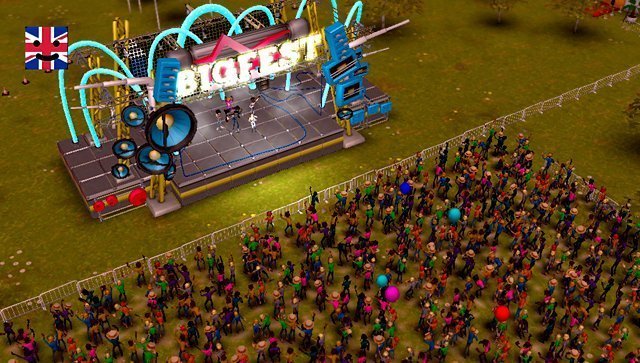 This is an image from the video game "BigFest." The Catholic News Service classification is A-II -- adults and adolescents. The Entertainment Software Rating Board rating is E10+ -- Everyone 10 and older.

NEW YORK — Rock ‘n’ roll has a notorious reputation for causing trouble, from drug addiction and promiscuity to blown-out eardrums. But what if power chords could also teach personal responsibility?

That’s part of the point of "BigFest," a fun, if slow, simulation game available for the Sony PlayStation and Vita consoles.

The setup seems easy enough: The player is a promoter putting on an outdoor rock festival in the middle of a big field. Sounds groovy, right?

But then the necessary logistics present themselves. Variables to be managed include security, food, tents, toilets, concessions, roadies, generators, insurance, emergency care — even sound levels. Oh, and the gamer is also responsible for keeping all the bands happy and ejecting potential troublemakers.

"BigFest" doesn’t involve any violence or sexual content, and the songs on the soundtrack are profanity-free. Still, its emphasis on the business side of the music industry makes this title too complex for small children. As for young adults, by contrast, the game teaches them that large-scale fun often has to be organized, kept on a budget and insured.

"BigFest" begins with a poster featuring a list of bands. Gamers pick which groups they want to have play, and that cues the headlining band to begin performing. It’s also the signal for the promoter to start building things, and to do so at a lively pace since people are already streaming through the front gates. To make the festival a success requires money — or "BigNotes" in the parlance of the game.

The graphics of "BigFest" are serviceable, not spectacular. Gamers are given a moving bird’s-eye view, allowing them to make sure the roadies are fed and awake and that things are running smoothly.

Helping out is Big Dave, a festival veteran who appears in a corner of the screen to assist and give advice. Big Dave looks a lot like Lemmy, the recently deceased lead singer of the rock group Motorhead.

With enough juggling of the accommodations, food and musicians — and enough crowd control from Dave — players can finally enjoy a fully functioning festival. It takes a while to get there, though, and gamers used to more kinetic action may lose interest before the bands at the lower end of the bill take the stage.

Still, with a price point under $10, "BigFest" is relatively inexpensive. It’s also diverting — and innocent enough for most age groups.

The Catholic News Service classification is A-II — adults and adolescents. The Entertainment Software Rating Board rating is E10+ — Everyone 10 and older.