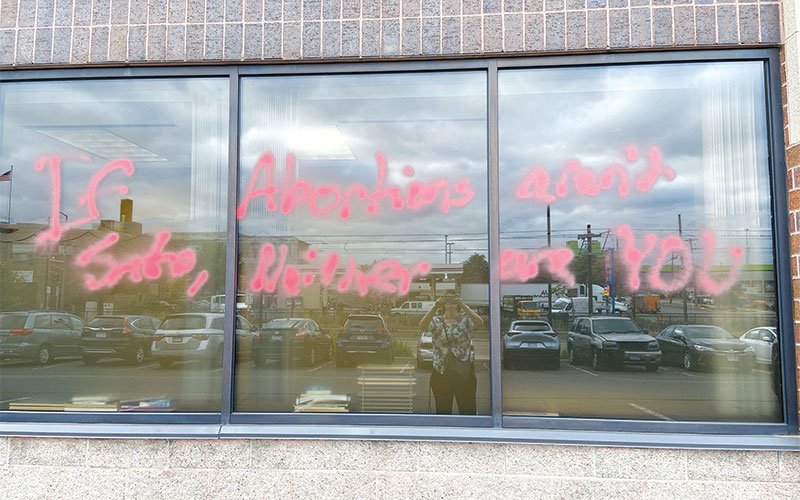 WASHINGTON (CNS) — House sponsors of a new bill to protect pregnancy centers said the measure would require the Biden administration to publicly disclose how it is handling the investigation and prosecution of the perpetrators of violent attacks on pregnancy resource centers around the country.

“My goal is to foster an environment where no woman feels like their only option is abortion, and I am committed to supporting women and children at every stage of life,” said Rep. Cathy McMorris Rodgers, R-Wash., who co-sponsored the bill with Rep. Chris Smith, R-N.J.

“The violent attacks on pregnancy centers in Washington state and across the country are reprehensible and only endanger and intimidate the women who depend on them for critical medical care, education and other resources,” Rodgers said in a statement Sept. 20, the day she and Smith introduced the bill.

“I believe all extreme and hateful acts of violence should be condemned, which is why I’m helping lead this legislation to hold President (Joe) Biden accountable for his failure to respond to this threat with the urgency it deserves,” Rodgers said.

More than 70 acts of violence on pregnancy care centers

Nearly 70 acts of violence against such centers have been recorded since May, when a draft opinion of the U.S. Supreme Court decision in the Dobbs vs. Jackson Women’s Health organization case was leaked.

The court’s June 24 decision in the Dobbs case ultimately overturned Roe v. Wade, which had legalized abortion nationwide. The ruling allows states to decide their own laws regarding abortion.

Many of the centers have been firebombed, vandalized and graffitied.

Smith said the “pro-abortion” group “Jane’s Revenge,” whose name has been graffitied on many of the centers that have been attacked, has declared “open season” on these pro-life pregnancy centers, amounting to what he called “horrific acts of terrorism.”

“Now more than ever, we need to ensure the safety and security of the estimated 3,000 pregnancy care centers that provide life-affirming alternatives to abortion — offering critical, quality care for pregnant women facing challenging circumstances and helping to save so many unborn, innocent lives,” said Smith said in a statement.

He said the attacks on these centers are “a coordinated effort to intimidate front-line volunteers and licensed medical professionals providing critical support to mothers in need and their unborn baby boys and girls.”

Bill would require investigations to be disclosed

Among its provisions, the Protect Pregnancy Care Centers Act would require the inspector generals of the departments of Justice and Homeland Security to investigate and disclose to Congress information on the Biden administration’s response “to the surging violence,” including details gathered on groups that have claimed responsibility for the attacks and the number of prosecutions initiated against perpetrators.

The measure also would require the Biden administration to report on current funding streams available to pregnancy care centers for needed security measures “to guard against violent threats and provide recommendations for the creation of additional grant programs to protect them given the spike in attacks in recent months.”

Carol Tobias, president of National Right to Life, said the legislation “is a step forward in ensuring that pregnancy centers are able to serve the needs of women in their communities without fear of violence.”

Other supporters of the measure include the U.S. Conference of Catholic Bishops, Heartbeat International, the National Institute of Family and Life Advocates, Susan B. Anthony Pro-Life America, March for Life and the Family Research Council.

In a June 16 story, the Washington Examiner quoted an FBI spokesperson as saying the agency was investigating attacks and threats “targeting pregnancy resource centers and faith-based organizations across the country.”

“The FBI takes all threats seriously and we continue to work closely with our law enforcement partners and will remain vigilant to protect our communities,” the spokesperson said.

Violent attacks on other Catholic sites

Besides attacks on pregnancy centers, arson, vandalism and other destruction has taken place at about 100 Catholic sites across the United States since May 2020.

A number of Catholic and other pro-life leaders, as well as members of Congress, have urged the Biden administration to do more to investigate such attacks.

On Sept. 21, the CEO of a pregnancy care center in Buffalo, New York, that was firebombed over three months ago told reporters that neither the local police department nor the FBI “is taking the case seriously.”

In late June, Sen. Elizabeth Warren, D-Mass., called for the state and federal government to “crack down” on crisis pregnancy centers, and a month later demanded the federal government shut them all down because, she said, they “fool people who are looking for pregnancy termination.”

It said the centers provide such services as limited obstetrical ultrasounds under a local doctor’s oversight; parenting classes; material assistance, such as diapers, cribs and car seats; and referrals to local resources to help pregnant women in need with housing or transportation.