Bill to codify Roe called one of most ‘extreme’ abortion bills in U.S. - Catholic Courier 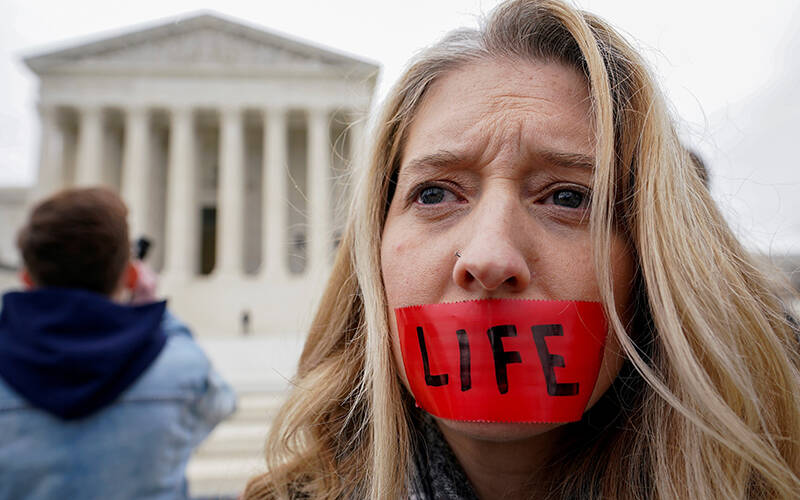 A pro-life activist is seen outside the U.S. Supreme Court building in Washington Jan. 24, 2020. (CNS photo by Kevin Lamarque/Reuters)

WASHINGTON (CNS) — The Women’s Health Protection Act of 2021, introduced in the U.S. Senate and House June 8 and currently moving through various committees in both chambers, “is nothing short of child sacrifice,” said Archbishop Salvatore J. Cordileone of San Francisco.

The “misnamed” measure, he said, “shows to what radical extremes the supposedly ‘pro-choice’ advocates in our country will go to protect what they hold most sacred: the right to kill innocent human beings in the womb,” he said in a Sept. 21 statement.

Denver Archbishop Samuel J. Aquila also weighed in with a statement a day later, echoing the San Francisco prelate in urging the bill be defeated.

“Today, the abortion industry and its supporters are pushing one of the most extreme national abortion bills this country has ever seen, and doing it under the lie that abortion is a form of health care that must be protected and promoted,” the Denver prelate said.

If Congress passes the bill and it becomes law, it would invalidate nearly all existing state limitations on abortion.

The House and Senate bills — H.R. 3755 and S. 1975 — would codify the U.S. Supreme Court’s 1973 Roe v. Wade decision in law legalizing abortion nationwide. It would establish the legal right to abortion in all 50 states under federal law.

The bill would nullify requirements to provide women seeking abortion with specific information on their unborn child and on alternatives to abortion; laws requiring a waiting period before a woman receives and abortion; laws allowing medical professionals to opt out of providing abortions; and laws stating that only licensed physicians can perform abortions.

“It is especially shameful that any self-professed Catholic would be implicated in such an evil, let alone advocate for it,” Archbishop Cordileone said.

While he didn’t name any Catholic lawmakers in his statement, the archbishop has taken House Speaker Nancy Pelosi, D-Calif., to task for her support of legal abortion as a Catholic. President Joe Biden, who also is Catholic, supports legal abortion and he too has vowed to see Roe codified in federal law.

On Sept. 2, Pelosi called the Supreme Court “cowardly” for refusing to block a Texas law banning abortions after six weeks of pregnancy. In a late-night, 5-4 decision Sept. 1, the court said the challenge to the law did not adequately address the “complex and novel antecedent procedural questions.”

The law took effect Sept. 1, but lower court challenges to it continue.

The court’s “cowardly, dark-of-night decision to uphold a flagrantly unconstitutional assault on women’s rights and health is staggering” and “shameful,” Pelosi said, emphasizing H.R. 3755 will “enshrine into law reproductive health care for all women across America.”

Archbishop Cordileone implored Catholic politicians “in particular” to listen to what Pope Francis said about abortion during his flight back to Rome from Slovakia.

Archbishop Cordileone also said he supported the Sept. 15 letter sent to members of Congress by the chairman of the U.S. Conference of Catholic Bishops’ Committee on Pro-Life Activities.

In that letter, Archbishop Joseph F. Naumann of Kansas City, Kansas, urged lawmakers to reject this “deceptively-named, extreme bill (that) would impose abortion on demand nationwide at any stage of pregnancy (and) … eliminate modest and widely supported pro-life laws at every level of government.”

He said Congress should instead “put the energy and resources of our federal government behind policies that recognize and support both mothers and their children.”

The enacting clause of H.R. 3755/S. 1975 states: “To protect a person’s ability to determine whether to continue or end a pregnancy, and to protect a health care provider’s ability to provide abortion services.”

In his statement, Archbishop Cordileone asked “all Catholics in our country immediately to pray and fast for members of Congress to do the right thing and keep this atrocity from being enacted in the law.”

“A child is not an object to be thrown away, and neither is a mother’s heart,” he added. “I’ve said it before and and I’ll say it again: The answer to a woman in a crisis pregnancy is not violence but love. This is America. We can do better.”

He urged Catholics and all people of goodwill to sign a petition against passage of the Women’s Health Protection Act at BenedictInstitute.org

In his statement, Archbishop Aquila also emphasized the measure “is not about protecting women’s health. … It is truly one of the most radical attacks on life we have ever seen. It is also a radical attack against the dignity of women.”

“The church is clear that all abortion is evil, and it is true that laws and regulations will go only so far in protecting the unborn,” he said. “We no doubt have much work to do to change the hearts and minds of those who view abortion as something to be valued, especially among those who claim to follow Jesus Christ.”

However, he said, the Women’s Health Protection Act “will put thousands of vulnerable lives at risk, and it must be prevented from becoming law.”

Archbishop Aquila called on Catholics to urge their elected representatives in Congress “to vote ‘No’ on this heinous attack on innocent life.”

“I also ask you to join me in supporting the many great organizations that provide actual compassionate care for pregnant women, mothers, parents, and families and not the abortion industry!” he added. “Let us pray for an end to abortion, a conversion of heart in our country, and that all life might be valued from conception to natural death.”