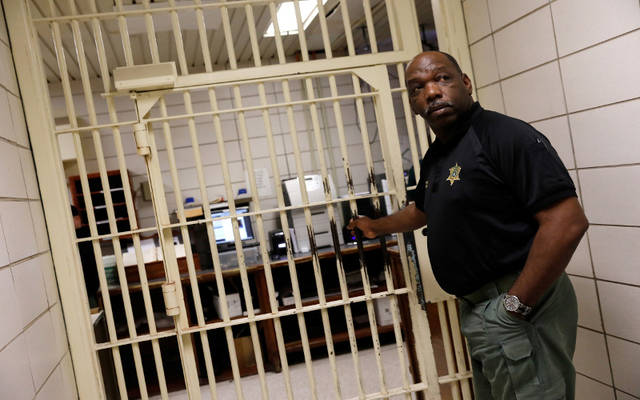 Warden Dennis Grimes opens the doors to holding cells in the East Baton Rouge Parish Prison in Baton Rouge, La., March 5. The federal government could start shaving the size of its prison populations in the wake of the First Step Act becoming law. (CNS photo by Shannon Stapleton/Reuters)

WASHINGTON — The First Step Act is now law. It took about five years of effort to put it together in such a way that a broad bipartisan coalition in both houses of Congress could vote for it, but that resulted in a narrow bill that left out anything that could have gutted the effort.

While nearly universally lauded, most of those who championed the First Step Act saw it, indeed, as just a first step.

“Our nation’s criminal justice system is in need of reform, and this legislation is a worthy ‘first step’ in the right direction and a model of bipartisan collaboration and good policymaking,” said a Dec. 20 statement by Bishop Frank J. Dewane of Venice, Florida, chairman of the U.S. bishops’ Committee on Domestic Justice and Human Development.

Among the provisions cited by Bishop Dewane in the First Step Act are sentencing reform, limits on shackling pregnant women in prison, establishing a maximum geographical distance between prisoners and their families, enhancing compassionate release for terminally ill and elderly prisoners, assisting returning citizens with obtaining government identification documents, and fixing the time-credit system. “The bill also reauthorizes the Second Chance Act, which will provide important resources for re-entering citizens after release from incarceration,” he said.

“It is important to recognize how limited in scope the reforms in this legislation actually are. Rather than propose a bold new vision for criminal justice policy, this legislation enacts reforms that should have happened a long time ago,” said Deacon Ted Penton, a member of the Society of Jesus, who heads the Jesuit Conference’s Office of Justice and Ecology, in a Dec. 20 statement to Catholic News Service.

“This will not solve every problem in the criminal justice system, but it is a good development,” said Michael O’Rourke, a domestic policy adviser in the U.S. bishops’ Department of Domestic Social Development.

“As far as the church goes, we have it in the bishops’ own statements, and the Compendium (of the Social Doctrine of the Church), and many statements from Pope Francis that there’s sort of a twofold purpose,” he added. “Although there is restoring public order and the correction of the offender, there also needs to be sense — the vast majority of folks we know are going to come back, so what is a justice (system) that can bring restoration? That’s what this bill tries to do.”

O’Rourke said, “We want justice for victims, but we refuse to give up on those who have committed crimes. ‚Ä¶ There has to be responsibility taken for harm — that’s the ‘first step’ — but there is also the possibility for restoration.”

Even the Christian citizens anti-hunger lobby Bread for the World found something in the First Step Act germane to its mission.

Nearly one in four households headed by returning citizens live in deep poverty and 91 percent of returning citizens report being food insecure, said a Dec. 20 statement by the Rev. David Beckmann, a Lutheran minister who is Bread for the World’s president.

Quovadis Marshall, who was jailed for second-degree robbery in 2002 in Iowa, went through the academy during his four years in prison, and is now the pastor of Hope City Church in Iowa. “I’m a satisfied customer,” he declared on a Dec. 19 conference call with reporters.

“Unequivocally, this has been the most life-changing experience I have ever had,” said Marshall, who came to Washington in June to lobby for the bill, adding that without it, “I would not be the man I am today. Currently it is limited only to state prisons. ‚Ä¶ if we opened it to federal prisons, I think we would have the same effect.”

As for next steps, Bread for the World said it plans to work with lawmakers to monitor the design and implementation of a risk assessment tool to ensure it takes into account existing racial and gender disparities in the criminal justice system.

“Now it is more important than ever that Congress move on to the next steps to build a more just society,” Deacon Penton said. “Moving forward, we will continue to advocate for reforms to mandatory minimum sentencing laws, an end to juvenile life without parole, bail reforms, and initiatives to make re-entry into society easier for formerly incarcerated individuals.”

“We’re one of the only industrialized nations in the world that locks up juveniles for life,” Neal said, adding next steps worth pursuing include the potential for sentence reductions, which were not made retroactive in the First Step Act. “Include all those people now and potentially will serve for crimes under the old law. There are a lot of people who would benefit from having their sentences reviewed and reduced,” she added.

“The second wave of reform the criminal justice system would look at policing reform and changes in law enforcement that result in the kind of mass incarceration we’ve seen in the past 40 years,” Neal said, listing “bail reform and additional reforms in the prison system that really recognize the dignity of human beings in prison, and opportunities for job training and re-entry programs that help people once they leave prison.”