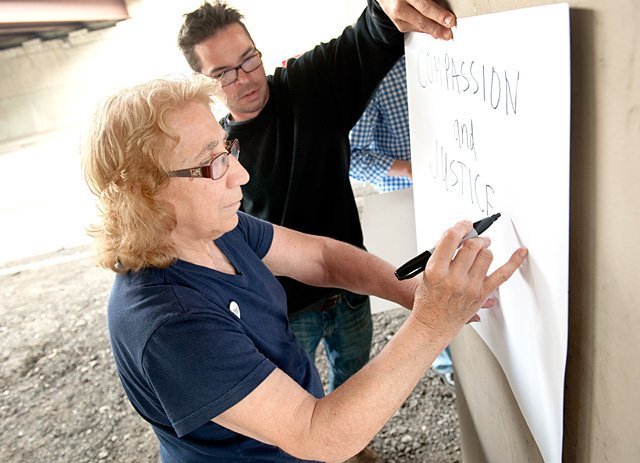 Sister Grace Miller makes a sign during a May 29 rally to raise awareness of homelessness in Rochester.

ROCHESTER — The House of Mercy is hoping to raise $80,000 by the end of July in honor of Sister Grace Miller’s 80th birthday.

Sister Miller, director of the House of Mercy, will turn 80 on July 13. A birthday celebration is planned July 12 at the Longhouse Shelter of Seneca Park in Rochester beginning with a noon Mass that will include a performance from the House of Mercy’s choir.

In honor of Sister Miller’s continued advocacy for the homeless population of Rochester, House of Mercy staff members have set up an online fundraiser to help her continue that work, according to information at http://houseofmercyrochester.org/sister-graces-birthday-party-fundraiser. Donations also may be mailed to 725 Hudson Ave., Rochester, NY 14621.

The funds also will help Sister Miller achieve her goal of opening another shelter following the closure of Sanctuary Village on Canal Street in April. She held a press conference last month calling for community action to help the increasing number of homeless people now finding themselves on the streets again, according to a recent Catholic Courier article (http://bit.ly/1Fn06Te).