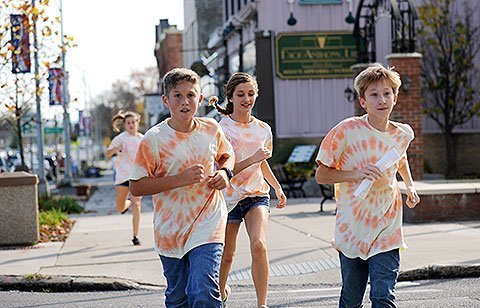 Ryan Hubler’s tie-dye-clad party guests raced up and down Main Street in Canandaigua on Oct. 26, darting in and out of shops as they searched for clues and solved riddles.

Obviously this was not your average birthday party.

It’s actually been quite awhile since Ryan Hubler had anything that could be considered a typical birthday party. When he turned 8 in 2007 he asked his young guests to forego bringing gifts for him and instead come to his party armed with donations for a local hospital. He’s repeated that request every year since then, and his classmates look forward to participating in his charitable birthday parties, which usually are themed and packed with games and goodies for the guests.

Ryan’s parents, Chris and Lisa Hubler, planned an extra-special celebration to commemorate Ryan’s 13th birthday this year. Drawing inspiration from the reality-television show "The Amazing Race," the Hublers planned a scavenger hunt through downtown Canandaigua, complete with riddles to solve, tasks to complete and items to pick up from participating businesses. The finish line for the race was at Canandaigua’s F.F. Thompson Hospital, which has received the children’s items donated by Ryan’s guests every year since 2008. The donations from his first party benefitted patients at Golisano Children’s Hospital in Rochester.

This year Ryan and his classmates donated more than 200 coloring books, board games, arts and crafts projects, and other items to the hospital. These items help ease the anxiety of the hospital’s youngest patients, said Anita Pietropaolo, development director for the F.F. Thompson Foundation.

"Their kindness touches the hearts of so many children and we at Thompson Health are so grateful for their generosity," Pietropaolo said.

The hospital’s staff members showed their gratitude by throwing a finish-line party for Ryan and his guests after they’d completed the scavenger hunt.

"It went great. It was really fun," Ryan told the Catholic Courier, noting that some of his classmates told him it was his best birthday party yet.

Ryan’s philanthropic nature first became apparent in October 2007 after his family had to pay an emergency visit to a Boston hospital when his 9-month-old sister had difficulty breathing. Rather than grumbling about spending the day at the hospital, Ryan studied the sick children around him and realized they were just like him, except they were probably bored because they were stuck in the hospital.

"I realized that some kids there didn’t get as many things as others do, and I decided to do something about it," Ryan recalled.

Ryan has been using his birthday as an opportunity to help sick children ever since. This year his parents did most of the planning so Ryan would be able to participate in the scavenger hunt with his friends, Lisa Hubler said, noting that Ryan gave her some guidelines at the beginning.

"He was very specific that he wanted it to be a pay-it-forward type of deal. It’s not so much about a foot race. It’s about thoughtfulness and how you treat people," she said.

Lisa Hubler approached several businesses on Main Street and asked if they’d be interested in participating, and they all readily agreed.

"A lot of the stores were so excited and really put so much thought into what the kids could do (in their shops)," she said.

The party, dubbed the Amazing Race, began at St. Mary School, where Ryan is in seventh grade. He and his classmates gathered there at 11:30 a.m.to eat lunch and learn the rules of the race. After finding their first clue in the school’s library, the five teams of students raced across the street to the YMCA to complete an outdoor task. Each team had to successfully toss four bouncy baseballs into a basket in order to receive the next clue.

Once solved, that clue led to a business on Main Street, as did the next eight clues. The clue leading to Rockcastle Florist, for example, urged the scavenger hunters to look for "a place where things grow in pretty glass jars."

"My favorite part was trying to figure out the clues and finding the right answers," Ryan said.

Some clues were unintentionally difficult to figure out, Lisa Hubler said. The clue that encouraged hunters to "find the place where dragons fly" was meant to lead the kids to Wick-edly Scent Soap and Candle Company, which has a dragonfly on its sign.

"They all misinterpreted that one. There’s a Chinese restaurant on Main Street so a lot of them went there, even though they don’t have a dragon on their sign," she said.

Once the teams solved the clues and found their way to the right businesses, they then had to solve riddles, find objects or complete tasks in order to receive their next clue. At the florist’s shop each child received one flower, and at Sweet Expressions candy shop, each team received one chocolate flower. The twelfth clue led the teams — each driven by a chaperone — to CIG Insurance Agency, where Chris Hubler works. Each team had to complete a task there before receiving the last clue, which instructed them to go to F.F. Thompson Hospital and give their flowers and chocolate to random strangers.

"The kids just ran in like gangbusters and threw their flowers at people," Lisa Hubler said, noting that hospital staff told her it was an amazing five minutes. "They made people happy."