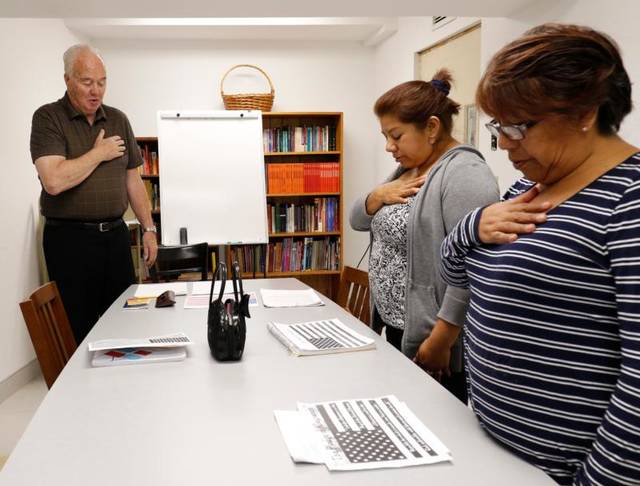 Volunteer instructor Jack Carroll and students recite the pledge of allegiance in October 2016 during a class at St. Luke Church in Brentwood, N.Y., for immigrants who are preparing to apply for U.S. citizenship.

WASHINGTON (CNS) — Calling a proposed piece of legislation “discriminatory,” the head of the U.S. Conference of Catholic Bishops’ Committee on Migration called on the president and Congress to reject a bill that seeks to drastically cut legal immigration levels over a decade, and which also would greatly limit the ability of citizens and legal residents to bring family into the U.S.

“Had this discriminatory legislation been in place generations ago, many of the very people who built and defended this nation would have been excluded,” said Bishop Joe S. Vasquez of Austin, Texas, chair of the bishops’ migration committee.

In a news release late Aug. 2, he criticized the RAISE Act introduced earlier in the day by Sens. Tom Cotton, R-Arkansas, and David Perdue, R-Georgia.

Other limitations proposed by the RAISE Act would permanently cap the number of refugees allowed safe passage, “thereby denying our country the necessary flexibility to respond to humanitarian crisis,” said Bishop Vasquez.

“As a church, we believe the stronger the bonds of family, the greater a person’s chance of succeeding in life. The RAISE Act imposes a definition of family that would weaken those bonds,” he said.

President Donald Trump said earlier in the day he backed the bill and said it would reduce poverty, increase wages and save taxpayer money. Bishop Vasquez said the bill would be detrimental to families and negates contributions of immigrants to the U.S., and he called on Congress and the administration instead “to work together in a bipartisan fashion to enact into law comprehensive immigration reform.”

“I believe that such reform must recognize the many contributions that immigrants of all backgrounds have made to our nation, and must protect the lives and dignity of all, including the most vulnerable,” said Bishop Vasquez.