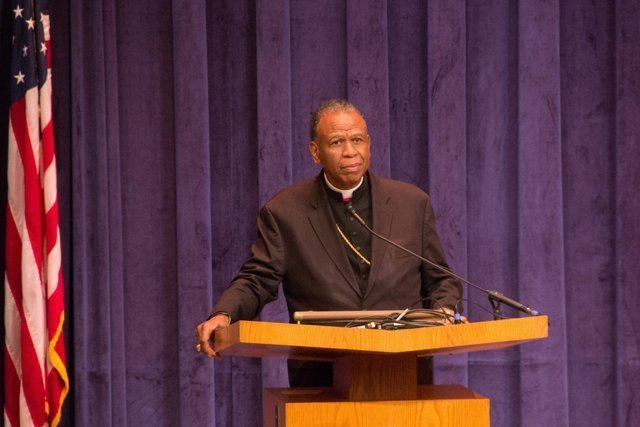 Bishop Edward K. Braxton of Belleville, Illinois, discusses race relations in an address at Georgetown University in Washington April 20. Bishop Braxton asked the American public to broaden their thinking about race and to try to better understand the everyday issues faced by nonwhites.

WASHINGTON (CNS) — Building a public address around his pastoral letter on the racial divide in the United States, Bishop Edward K. Braxton of Belleville, Illinois, asked his audience to imagine themselves in a world where the Catholic Church’s imagery and culture is Afro-centric.

In a program at Georgetown University April 20, Bishop Braxton framed challenges to the American public, and to Catholics in particular, to broaden their thinking about race to try to better understand the everyday issues faced by nonwhites.

As he did in his January pastoral letter: "The Racial Divide in the United States: A Reflection for the World Day of Peace 2015," Bishop Braxton, who is African-American, asked people to think about how they’d feel if the Catholic churches in their neighborhoods featured images of saints and God that were all dark-skinned and African in features. Imagine that in those churches, he added, the reputation was of a "black racist institution" where people of light complexion would be unwelcome. He challenged people to consider how they’d feel about such a faith.

He then recited a lengthy list of recent cases in which African-Americans were killed in encounters with law enforcement officers. In most of the situations, the men killed were unarmed and otherwise seemed to have posed a limited threat to others. He summarized the cases of Trayvon Martin, Oscar Grant III, John Crawford III, Michael Brown, Eric Garner, Tamir Rice and others.

Bishop Braxton touched on the occasionally violent public responses to those cases, including the killing of two New York police officers. Last December, Officers Wenjian Liu and Rafael Ramos were killed as they sat in a squad car in Brooklyn, by a mentally unstable man who said it was in retaliation for police killings of black men. He later committed suicide.

"A growing awareness seems to be emerging that renewed efforts must be made to re-establish bonds of trust and respect between law enforcement, the judicial system and local communities," Bishop Braxton summarized in his pastoral letter, from which he quoted throughout his Georgetown presentation.

In addition to the acknowledgement by law enforcement agencies that they need better training, more racial diversity and the regular use of body cameras by officers, he added, "some young men may be becoming more aware of the importance of complying promptly with police instructions, even if they seem unfair or unjust."

Also, religious leaders "are appreciating the urgent need for them to take a more active role in bridging the racial divide, especially between young African-American men and white representatives of the law," he said.

Bishop Braxton cited examples of "points of agreement" in society about race. Among them: "None of us knows with certainty what happened in any of these incidents," and that while some young men do commit crimes and are violent, that is not a reason to demonize anyone. By the same token, he said, some police officers are racist and unnecessarily violent, but that also should not be a reason to demonize all police either.

Another point of agreement, he said, is that while people have a right to protest peacefully, that doesn’t include breaking the law with violence, looting and endangering others. Also, Bishop Braxton said, there’s no disagreement that most Americans live in neighborhoods where people are from the same demographic as them. So, too, the Catholic Church tends to be segregated within itself, with African-Americans, Asians, Hispanics and whites each clustering in parishes with others like themselves.

Bishop Braxton challenged people to recognize their own biases as well as the church’s history of segregation and racism. Some of the prominent early Catholics in the United States owned slaves and the church’s leadership took a very long time before it condemned human bondage, he said. The U.S. church also did not oppose Jim Crow laws for a long time, he said.

In response to questions from the audience, Bishop Braxton said his own path to the priesthood was tempered by warnings that he would not be accepted as an African-American, and that his ministry and career options would be severely limited by his race.

He told of being subject to what is now called racial profiling by police — including once after he had become a bishop. In that case he said he was stopped while driving with his car loaded with donated furniture. Police who stopped him said they’d received a call about a probable burglar with a carful of furniture.

Editor’s Note: "The Racial Divide in the United States: A Reflection for the World Day of Peace 2015" is available as a text and study guide at: www.diobelle.org.