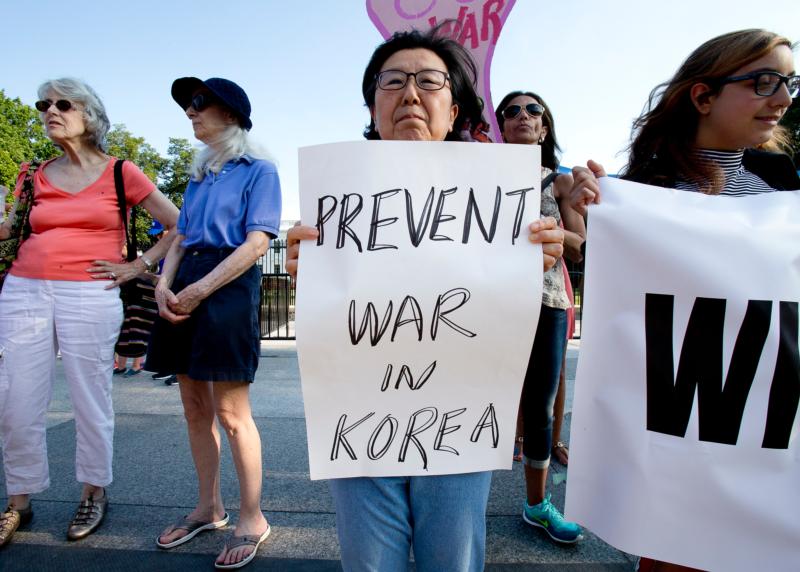 WASHINGTON (CNS) — Diplomacy and political engagement are necessary to resolve the differences between the United States and North Korea and avoid a military conflict, the chairman of a U.S. Conference of Catholic Bishops committee said in a letter to Secretary of State Rex Tillerson.

Writing Aug. 10, Bishop Oscar Cantu of Las Cruces, New Mexico, chairman of the bishops’ Committee on International Justice and Peace, echoed a recent call from the Korean bishops’ conference to support talks to secure the peaceful future of the Korean Peninsula.

Bishop Cantu acknowledged that the escalating threat of violence from North Korea’s leaders cannot be “underestimated or ignored,” but that the “high certainty of catastrophic death and destruction from any military action must prompt the United States to work with others in the international community for a diplomatic and political solution based on dialogue.”

The letter follows days of back-and-forth threats between President Donald Trump and North Korea’s leader, Kim Jong Un. Trump has threatened to unleash “fire and fury like the world has never seen” in response to Kim’s warnings of imminent attacks on the U.S. Meanwhile, Kim has said his country was preparing to fire missiles into waters around Guam, a U.S. territory in the western Pacific Ocean with two military bases.

The angry talk between the leaders has escalated since the Aug. 5 passage at the United Nations of new economic sanctions threatening to cut off a third of North Korea’s exports. Russia and China, two of Pyongyang’s few economic trading partners, supported the sanctions. The Association of Southeast Asian Nations also adopted a statement expressing “grave concern” over North Korea’s actions related to the development of nuclear weapons and missile delivery systems.

Bishop Cantu’s letter said his committee agreed with the stance of the Catholic Bishops’ Conference of Korea in its support for South Korean President Moon Jae-in’s proposal for humanitarian and military talks with North Korea.

“In solidarity with the Catholic Church in Korea and the efforts of the South Korean government, we urge the United States to encourage and support these talks,” Bishop Cantu wrote. “This avenue, unlike most others, offers the Korean Peninsula a future free from military conflicts or crises, which could simultaneously threaten entire nations and millions of lives in the region.”

In an interview with Vatican Radio Aug. 9, Archbishop Silvano M. Tomasi, former Vatican representative to U.N. agencies in Geneva, said that “instead of building walls and creating dissidence or admitting the possibility of recourse to violence,” both countries must have a constructive approach that benefits the people.

A former member of the U.N. Panel of Experts tasked with monitoring and implementing North Korea sanctions also called for calm and a negotiated solution to the differences between the two countries.

George A. Lopez, chair emeritus of peace studies at the University of Notre Dame, told Catholic News Service Aug. 10 the interests of both countries can be addressed at the negotiating table.

“We need somebody to talk about what are the underlying security needs of both North Korea and the United States and is there a forum to talk about that,” Lopez said. “If the U.S. issued a simple pledge that we seek no first use against North Koreans, we seek some way to bargain this out, you’d get some response to that.”

Asian nations want stability rather than uncertainty and that will require that talks get underway to assure the peaceful co-existence of both countries, Lopez said. “So how do we get there?” he asked.

Bishop Cantu’s letter reminded Tillerson that “this crisis reminds us that nuclear deterrence and mutually assured destruction do not ensure security or peace. Instead, they exacerbate tensions and produce and arms races as countries acquire more weapons of mass destruction in an attempt to intimidate or threaten other nations.”

The bishop also cited a call in July by agencies of the U.S. and European Catholic bishops for all nations to develop a plan to eliminate nuclear weapons from their military arsenals.

A joint declaration released by the USCCB and the Conference of European Justice and Peace Commissions called upon the U.S. and European nations to work with other nations to “map out a credible, verifiable and enforceable strategy for the total elimination of nuclear weapons.”

Marie Dennis, co-president of Pax Christi International, the Catholic peace organization, told CNS the organization was praying that both nations would step away from potential confrontation. She said Aug. 9 Pax Christi expected to release a statement on the situation within days.
– – –
Follow Sadowski on Twitter: @DennisSadowski.