Bishop Clark reflects on 30 years at the helm - Catholic Courier 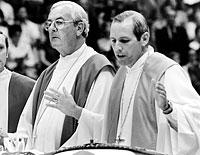 So determined was the newly installed Bishop Matthew H. Clark to better know the priests of his diocese, he asked them all to send him photos so he could connect their names and faces. He spent many evenings studying the pictures — not, as he recalls it, unlike the way a child might use flash cards to learn to read or do math.

“Clearly, just getting acquainted with people — as ordinary as that sounds — was a very, very important challenge,” he said.

Yet being chosen by Pope John Paul II to become a bishop at only age 41 was far from ordinary. Within a short time in 1979 he went from serving as spiritual director at North American College in Rome to being shepherd of the 350,000-plus Catholics in the Diocese of Rochester.

Prior to his 1962 priestly ordination, Bishop Clark, a native of the Albany Diocese, had spent three years in Rochester as a student at St. Bernard’s Seminary from 1957-59. Now, as he approaches the 30th anniversary of his installation on June 26, 1979, Bishop Clark is the second-longest tenured bishop in diocesan history, with only our founding bishop, Bishop Bernard J. McQuaid (1868-1909), having served longer. Just this past year he eclipsed Bishop James E. Kearney, who led the diocese from 1937-66.

Bishop Clark has made historic decisions, from elevating lay people into key leadership roles to closing schools and churches. Regardless of how his moves were received by the faithful, Bishop Clark has consistently presented himself as a man of God first and an administrator second. In fact, he described his favorite times during his tenure as “any moment in which I can celebrate with the community.”

“That could be a small country parish or a diocesan assembly. The core of my joy is to be with the people,” he said.

Involvement of the laity, in the spirit of the Second Vatican Council, has been a priority for Bishop Clark from the get-go and resulted in the emergence of many lay men and women in pastoral ministries — “something that pleases me very much,” he said.

“I came, I hope, with the disposition that all people should be included,” the bishop added. “I think we’ve come to a place where we work well with that. Without that, we wouldn’t exist.”

His 1982 pastoral letter, “Fire in the Thornbush,” gained national recognition for its promotion of women’s participation and inclusion in church and society. A decade later, that theme — along with lifelong faith formation, the consistent-life ethic and the development of small Christian communities — emerged as the top priorities from a three-year diocesan synod Bishop Clark convened in 1990.

“It assembled our local church in a very new way,” Bishop Clark said of the synod, which culminated in a 1993 dioceanwide celebration in conjunction with the diocese’s 125th anniversary. “That, I will always remember with great fondness.”

Promotion of young people, marked by a significant expansion of parish youth-ministry programs and the involvement of teens in liturgical roles, has been another priority for the bishop. Following similarly inclusive lines, he also has been a leader in interfaith relations, signing major documents of understanding and collaboration with local Jewish leaders in 1996 and with Muslims in 2003. Both agreements are believed to be firsts of their kind in the country.

Among other developments the bishop ranked as highlights of his 30-year bishopric are: a significant reorganization of the Pastoral Center; expansion of Catholic Charities into regional offices; growth of such diocesan departments as human resources and information technology; and promotion of what he called a “culture of stewardship,” reflected by such successful fundraising ventures as the Catholic Ministries Appeal (formerly Thanks Giving Appeal), Miracle of Sharing and Partners in Faith capital campaigns.

“I mention these because I’m aware of the great work so many people did to make all of this happen,” Bishop Clark said.

Also during his tenure, Bishop Clark has overseen the evolution of St. Bernard’s Seminary into St. Bernard’s School of Theology and Ministry, a graduate school that opened a new campus in Pittsford in 2003. He additionally spearheaded the extensive renovation of Sacred Heart Cathedral, which reopened in 2005.

“I am thrilled to pieces. I couldn’t be happier the way it turned out,” he said of the cathedral.

Some of Bishop Clark’s memorable moments also have touched off controversies. Opponents of the $11 million cathedral project, for example, waged a vigorous though ultimately unsuccessful legal battle seeking a landmark designation that would have prevented significant changes to the structure.

Back in 1986, Bishop Clark drew national attention for his support of Father Charles Curran, a Rochester diocesan priest who was ultimately removed from his teaching position at The Catholic University of America due to his dissent from certain aspects of church teaching on contraception and other moral issues.

“That was a very important learning experience. It called me to look at my own sense of church in a new way,” Bishop Clark said, adding that the Father Curran controversy factored significantly into “my ongoing development, not just as a pastoral minister but as a human being.”

Emotion also ran high in 1997 when Bishop Clark presided at a Mass of healing for gays and lesbians, their families and friends. The liturgy was celebrated in a packed cathedral, with numerous opponents picketing outside.

In a highly publicized dispute at Rochester’s Corpus Christi Church (now part of Our Lady of the Americas Parish) the following year, he removed the Rev. James Callan as administrator of the church after parish leaders repeatedly violated church teachings related to same-sex unions, allowed women to perform liturgical roles reserved for priests or deacons, and encouraged unbaptized people to receive the Eucharist. The conflict ended in schism, leading to formation of the Spiritus Christi Church.

“In my judgment, (the former leadership at Corpus Christi) pushed the envelope too far. It was a very painful moment for all of us and continues to be so,” Bishop Clark said, adding that he still prays for Spiritus Christi members to eventually be “back in full communion” with the Roman Catholic Church.

The bishop also has removed a number of priests — including six priests in one day in 2002 — from duty due to allegations of sexual abuse of minors. He rates the abuse scandal of recent years as the most painful experience of his entire bishopric. And, although he said he believes the worst is over and that the Rochester Diocese has installed excellent policies to prevent future cases, “we continue to deal with it. If we forget the lessons we’ve learned, it’s a dark tragedy,” he said.

Another tough issue has been a steadily declining number of priests, leading the bishop in 1997 to embark on a pastoral-planning process that has seen numerous consolidations and church closings. Meanwhile, increasing costs and declining availability of women religious to serve as teachers resulted in the closing of dozens of diocesan schools, including 14 last year — 13 in Monroe County alone.

Bishop Clark said he stands by all the difficult decisions he has made, yet acknowledged that “any leader, whether it’s in the wider church or elsewhere, learns pretty early that a leader can be a lightning rod.”

“I welcome the feedback. No one of us knows it all,” he added. “Sometimes that criticism will sting, but if you don’t listen to it, you’re never going to improve.”

Despite the authority his position entails, Bishop Clark’s public persona is anything but that of an iron-fisted dictator. He prefers to include parish communities in decision making — as the pastoral-planning and synodal processes illustrate — to whatever degree possible. He said he greatly respects the opinions of local women religious, and in regard to his priests he stated, “I feel like I’m not their boss. I’ve always tried to develop a sense that we’re coworkers.”

Bishop Clark has displayed his common touch by saying Mass in Monroe County Jail every Christmas morning, sleeping under the stars with diocesan youths at World Youth Day in Denver in 1993, and dressing in T-shirt and shorts at youth conventions. His hand is seemingly always extended for a shake at public events, and he willingly spends many minutes having his picture taken.

Though he appears not much older than in photos from his installation, Bishop Clark nonetheless will be required — in accordance with church law — to submit his letter of resignation upon turning 75 years old on July 15, 2012.

“I’ve often said I’d like to be as good to my successor as he was to me,” Bishop Clark said in commending the groundwork laid for him by Bishop Joseph L. Hogan, Rochester’s seventh bishop (1969-79). Bishop Clark lauded Bishop Hogan for his work in implementing then-new Vatican II reforms, saying, “I came into something that was very much alive.”

Yet he also contended that “it will take several generations” to fully implement Vatican II, so Bishop Clark said he hopes for the diocese’s “ongoing reform and renewal” long after he retires. He also urges the diocesan faithful “to keep living in the church as fully as we can, with Christ as our guide, our light, our center.”

He said he also looks forward to a rise in diaconal and, especially, priestly vocations in future years. And, although he’s pleased that several women are now running diocesan parishes as pastoral administrators, he expressed frustration that church law still bars them from giving homilies.

“We’re observing the (liturgical) norms, but my own hope — and I pray for this often — is that the church will review this,” he said.

By and large, Bishop Clark said “I like to leave things in good order, and I think they are in good order.” However, he added that he’ll continue to address important issues head-on as they arise, rather than leave messes for his successor to clean up.

“We can’t put blinders on,” he remarked.