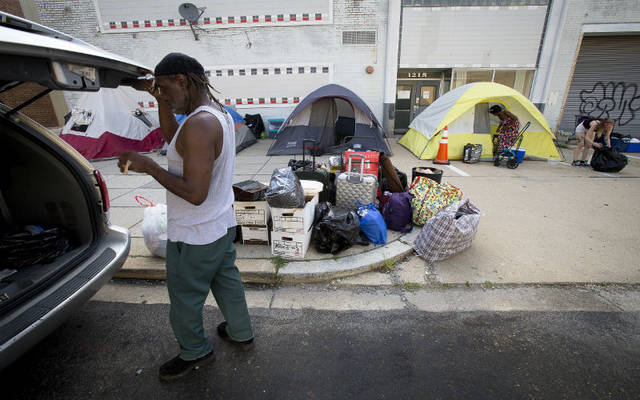 Homeless people are seen in Washington June 22. Bishop Frank J. Dewane of Venice, Fla., chair of the U.S. bishops’ domestic policy committee, released a statement Nov. 17 proclaiming that the House of Representatives “ignored impacts to the poor and families” in passing the Tax Cuts and Jobs Act the previous day.

WASHINGTON (CNS) — The chairman of a U.S. bishops’ committee concerned with domestic justice issues expressed disappointment over the House of Representatives’ passage of “the deeply flawed” tax cut bill.

In a statement Nov. 17, Bishop Dewane cited findings by the nonpartisan congressional Joint Committee on Taxation that show the bill’s raising of taxes on the working poor beginning in 2023 while giving simultaneous tax cuts to the highest-income Americans is problematic.

A Nov. 9 letter to House members by the chairmen of three U.S. Conference of Catholic Bishops’ committees outlined what they called “many deficiencies” in the bill and that the bill places “new and unreasonable burdens on families.”

Bishop Dewane credited lawmakers for restoring the adoption tax credit, which was not included in earlier versions of the bill. But he also raised concern that the House measure repeals an exclusion for families assisted by their employer to adopt children in need and eliminates incentives for charitable giving.

Other problems in the bill cited by the bishop include elimination of the Work Opportunity Tax Credit and tax relief for people paying for tuition and student loans and as well as for individuals who retire on disability.

He said that the bill “takes an important step forward toward strengthening parents’ ability to choose a school that best suits their child” and called for reversal of the repeal of provisions that aid teachers and students in nongovernment schools.

Turning to the Senate’s tax cut bill, Bishop Dewane said the USCCB continued to assess its provisions but offered comments about a few provisions.

“The Senate must act decisively to avoid the deficiencies in the House legislation and craft a final bill that affirms life, cares for the poor and ensures national tax policy aimed at the common good,” the bishop said.

Although crediting the Senate bill for keeping tax benefits that the House bill eliminates, Bishop Dewane expressed concern about the Congressional Budget Office projection that the tax cut plan will add $1.5 trillion to the deficit over the next decade. He said that the rising deficit will likely lead to spending cuts, particularly in programs that aid poor and vulnerable people, much to the chagrin of his committee.

Problems cited by the bishop include:

— Omission of the “above-the-line” charitable deduction, which could result in up to $13 billion in lost charitable contributions annually.

— Elimination of the personal exemption, which will cause a net loss for families.

He welcomed expansion of the child tax credit and a provision that incentivizes paid family and medical leave, but called for that provision to continue beyond 2019, when the bill calls for it to end.

“The Senate must work to ensure a legislative process characterized by integrity, one in which Americans can fully understand the tax proposals which will be voted upon,” he added. “It must also seek to pass a law that demonstrates that our nation prioritizes care for the most vulnerable among us.”