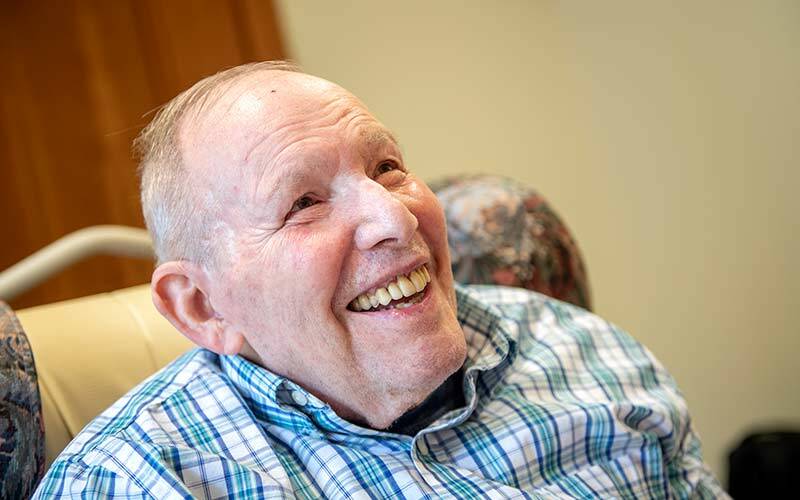 Bishop Emeritus Matthew H. Clark smiles during a July 14, 2021, celebration at the Sisters of St. Joseph Motherhouse in Pittsford to recognize his 84th birthday July 15. (Courier photo by Jeff Witherow)

Priests of Rochester Diocese reflect on many decades of ministry

Although he was ordained for the Diocese of Albany almost 60 years ago, Bishop Emeritus Matthew H. Clark has spent the majority of his priesthood living and serving among the people of the Diocese of Rochester. The effects of his ministry on the people of this diocese are immeasurable and lasting, according to Father Thomas Mull.

“There are many blessings remaining in this diocese because of Bishop Clark,” said Father Mull, who shared a residence with Bishop Clark at Rochester’s Sacred Heart Cathedral for 18 years. “I believe that I developed my love for priesthood from Bishop Clark.”

Albany to Rome by way of Rochester and back

Bishop Clark grew up in Waterford near Albany. He attended Catholic Central in Troy, Holy Cross College in Worcester, Mass., and Mater Christi Seminary in Albany. He also spent two years at the former St. Bernard’s Seminary in Rochester during the late 1950s, long before he had any inkling the Rochester Diocese eventually would become his home.

He finished his priestly formation at the North American College in Rome and was ordained a priest Dec. 19, 1962, at the Church of Christ the King in Rome. He then taught at the Vincentian Institute in Albany, served at two parishes and had a one-year role as vice chancellor for the Albany Diocese. He also returned to Rome, first to earn licentiates in sacred theology and canon law from Gregorian University and later to work at the North American College as assistant spiritual director and later as spiritual director for seminarians.

Then-Father Clark was in Rome on April 23, 1979, when St. Pope John Paul II named him to lead the Rochester Diocese, and he was installed as Rochester’s eighth bishop June 26, 1979. Bishop Clark led the Diocese of Rochester for 33 years before retiring in 2012 at the age of 75.

The bishop emeritus continued to lead parish retreats for several years after retiring. In 2019, he made public a diagnosis of early-stage Alzheimer’s disease and in 2020, he moved into the Sisters of St. Joseph Motherhouse in Pittsford.

“His very being is a precious gift,” Sister Morgan said. “When any one of us walks into his room, he lights up with that wonderful and gracious welcoming spirit, and we know our Bishop Matthew is once again among us, as we remember him.”

Many people throughout the diocese not only remember Bishop Clark, but also send him cards and letters, said Mercy Sister Mary Ann Binsack, who reads the notes to him during her regular visits. The bishop emeritus, 84, still likes to laugh, she remarked.