Bishop: Eucharist is 'an encounter with the living Lord' - Catholic Courier 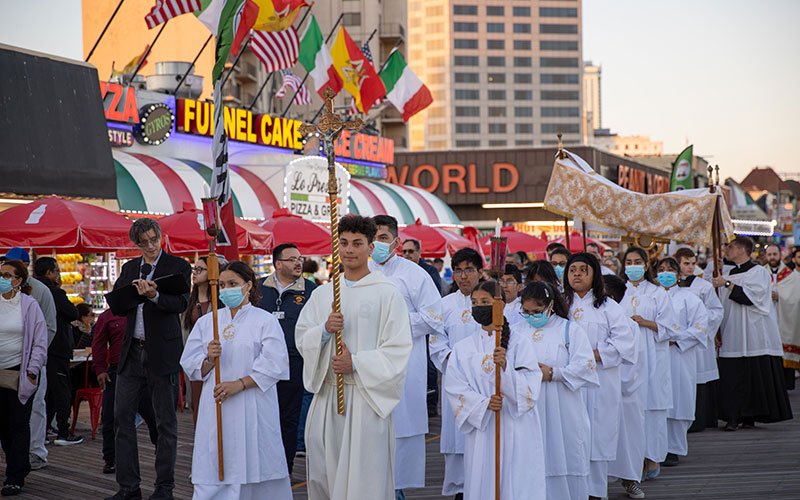 ATLANTIC CITY, N.J. (CNS) — As dusk faded into night, so, too, did the hallmark sounds of a Saturday on the Atlantic City Boardwalk as more than a thousand Catholics lifted up their voices in prayer and song during a candlelit eucharistic procession led by Bishop Dennis J. Sullivan of Camden, New Jersey.

As priests of the diocese held the monstrance high during the nearly one-mile walk, the scent of incense mingled with that of pizza, funnel cakes and the salty ocean breeze while curious onlookers emerged from eateries to take photos or ask questions. Others dropped to their knees in genuflection.

“We are the Church of Camden,” Bishop Sullivan said in celebrating the vigil of Corpus Christi June 18.

Speaking on the sixth chapter of John, Bishop Sullivan said, “We heard Jesus say, ‘I am the Bread of Life.’ Jesus’ self-identity. … He is in this host that we have carried in procession. … In the Blessed Sacrament, the holy Eucharist, we encounter Jesus Christ. … He is really present. He is truly present, and when we receive the Lord in holy Communion, his life mixes with our lives.”

“The Eucharist is an encounter with the living Lord,” he continued. “So sisters and brothers, may this three-year initiative inspire faith-filled devotion to the sacrament of the Eucharist here in our diocese.

“May it convert those who have strayed from the flock. May it clearly teach the truth of Catholic faith. The truth that the Lord is present, really and truly present, not symbolically.”

The initiative he described is the National Eucharistic Revival instituted by the U.S. Conference of Catholic Bishops and officially launched on the weekend of the feast of Corpus Christi, June 18-19, in dioceses across the United States with eucharistic processions.

The revival, which will culminate in the National Eucharistic Congress in Indianapolis in 2024, is the bishops’ response to polls showing that belief in the Real Presence in the Eucharist is waning among professed Catholics.

According to a 2019 Pew Research Center study, roughly two-thirds of U.S. Catholics do not believe that the bread and wine at Mass become Christ’s body and blood during the consecration — a core dogma of the Catholic faith and the “source and summit” of the church’s life, according to the Catechism of the Catholic Church.

With the theme of “My Flesh for the Life of the World” (John 6:51), this three-year push aims to inspire a “movement of Catholics across the United States, healed, converted, formed and unified by an encounter with Jesus in the Eucharist.”

In Atlantic City, Bishop Sullivan addressed the faithful toward the end of the procession at an altar set up at the boardwalk’s Kennedy Plaza.

Other temporary altars were set up all along the route. Catholics representing dozens of parishes from across the diocese’s six counties — and beyond — paused two times to genuflect before temporary altars that had been set up.

At the first altar, members of the Asian-Pacific community led a prayer in Korean, along with Filipino music and a traditional Vietnamese dance. Members of the Latino community led prayer and song at the second stop, with the faithful placing red and white flowers in front of the monstrance.

Hector Paradela of St. Katharine Drexel Parish in Egg Harbor Township, who directed the Filipino choir, called it an honor to sing in front of the Eucharist with so many people in attendance.

“I hope people learn that the Eucharist is the center of our life. That is what our song is about, too,” he told the Catholic Star Herald, Camden’s diocesan newspaper. “Life moves in everything we do — food, sleep, work — this is the center of it all, what it’s about. Otherwise, whatever else you do is meaningless.”

Father Robert Hughes, the Camden Diocese’s vicar general and moderator of the curia, was amazed at the number of people who took part in the procession.

“It was beautiful,” he said. “A perfect place for us to demonstrate our faith. People joined along the way, and the crowds along the boardwalk enjoying their evening couldn’t help but take notice. You could hear them questioning: ‘What is that?’ ‘Why are they doing it?’ If some of them had their questions answered, that’s good.”

Thousands participate in eucharistic procession and festival in Indiana

Across the country in the Diocese of Fort Wayne-South Bend, Indiana, thousands flocked to the city of Warsaw for a eucharistic procession and festival June 19.

The crowd seemed to grow from the onset of the three-and-a-half-hour walk from Sacred Heart Catholic Church to Our Lady of Guadalupe Catholic Church.

Bishop Kevin C. Rhoades led the procession, carrying the Blessed Sacrament in the monstrance the entire 2.8 miles with one stop at Central Park, located in the heart of the city.

Warsaw is considered the halfway point between Fort Wayne and South Bend.

Nearly every parish in the diocese seemed to be represented at the procession, sporting matching T-shirts or following their parish banner. Multicolored umbrellas bobbed above the heads of many in the vast crowd, not to protect people from rain, but to provide shade from the brilliant sunlight overhead.

As the procession went through neighborhoods on its route, some residents stood on their porches to take photographs or watch the worshippers walk by. A few of them even displayed Catholic objects such as statues of Mary or knelt as the monstrance passed.

Various hymns floated in the air as priests raised their voices in age-old hymns at the head of the procession, while members of St. Augustine Parish sang African spirituals and gospel songs farther down the line. Others prayed the rosary as they walked along or carried pictures of Mary, icons or crucifixes.

A group of Nigerian Catholics joyously sang in Igbo and danced as they walked along, with some of the missionary priests from that country joining in their festivities. Their choir performed when the procession stopped at the altar in Central Park.

Burmese Catholics from Fort Wayne also took part in the procession, led by Father Peter Dee De, parochial vicar at the Cathedral of the Immaculate Conception, and boasted a choir that sang in the prelude as did Vietnamese and Filipino choirs.

Age was no barrier to attendance, either. Youths pushed the aged in wheelchairs; families with teenagers and infants processed together; couples both young and old joined the throng.

Aside from the priests and seminarians leading the procession, other clergy and men and women religious whose provincialates are located within the diocese attended.

The Gettinger family from St. Thérèse Little Flower Parish in South Bend attended with their children. Eight-year-old John called it “a walking adoration, like an adoration parade. It was very awesome!”

His mother, Megan, enjoyed sharing the experience with her husband and four children and others in their parish family. Her favorite memory was jogging with their double stroller across the grass at Central Park to get “as close as we could to see Jesus.”

Megan commented that “it was such a joy to witness so many Catholics gathered together around the one who unites us — Jesus present in the Eucharist.”

“It was really powerful to have everyone praying together in a public way,” he told Today’s Catholic, the diocesan newspaper. “It’s important for us to not only remind ourselves that Jesus is truly present, but also to speak the truth boldly with our actions.”

“It reminded me of the Old Testament,” he added, “when the Jewish people would process with the tabernacle.”

Home » Eucharistic Revival » Bishop: Eucharist is ‘an encounter with the living Lord’
Tags: Eucharistic Revival
Copyright © 2022 Catholic News Service, Inc. All rights reserved. Linking is encouraged, but republishing or redistributing, including by framing or similar means, without the publisher's prior written permission is prohibited.