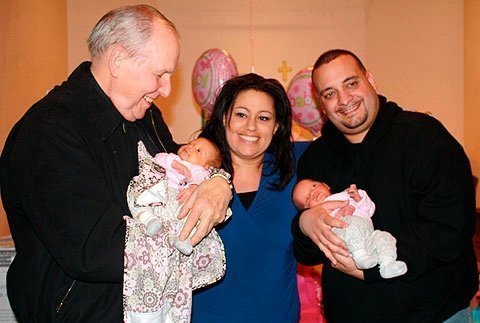 Bishop Matthew H. Clark holds Melina Sotomayor as Amanda and David Sotomayor look on during a baby shower at Holy Apostles Parish in Rochester. The bishop prayed for the Sotomayor family before Melina and her twin sister, Olivia (right), were born.

Amanda Sotomayor was in a dark place when she met Bishop Matthew H. Clark at the diocesan Chrism Mass in the spring of 2011. The previous year she’d given birth to a stillborn son and was still grieving his loss.

"I didn’t think things were ever going to get good in my life again," said Sotomayor, a member of Rochester’s Holy Apostles Parish.

A heartbroken Sotomayor toyed with the idea of asking Bishop Clark to pray for her and her husband, David, but was intimidated by what she saw as the bishop’s celebrity.

"I was afraid to even say anything, but I was like, ‘You know what, I need these prayers, so I’m going to go over there and ask him,’" she recalled.

Telling Bishop Clark about the loss of her son, she asked him to bless and pray for the couple. Although the bishop consented, she didn’t really expect him to remember her request. She was surprised when she began receiving periodic letters from Bishop Clark, who told her he was praying for the couple.

Before long Sotomayor learned she was pregnant again, this time with twins. Bishop Clark continued praying for Sotomayor and her husband for the duration of her pregnancy, and he was one of the first people she called after she gave birth to twin girls, Melina and Olivia, on March 26 of this year. He even attended a baby shower Holy Apostles threw for the couple shortly after the twins’ birth.

"He made time in his calendar to come. He sat down and visited with us. He held my girls, he prayed with us," she said.

Sotomayor is not the only person to be surprised and touched by the bishop’s love and concern for individual members of his flock. Many Catholics throughout the 12-county diocese have their own fond memories of sometimes surprising interactions with Bishop Clark.

Kateri Whirtley, for example, met the bishop in Kansas City, Mo., during the 2009 National Catholic Youth Conference. Then a high-school sophomore, Whirtley and two other teens were eating lunch at their hotel’s restaurant when they saw Bishop Clark walk in.

"He was by himself and that never happens because he’s like a celebrity," said Whirtley, now 18.

After watching Bishop Clark sit down at a table by himself, Whirtley and her friends screwed up their courage, walked up to him and asked if they might join him for lunch. He agreed, and ended up sitting and talking with the teens for more than two hours, said Whirtley, who belongs to Sacred Heart Parish in Auburn. She added that Bishop Clark talked to the teens as equals and respected their opinions.

"To hear him say he has respect for you is just amazing," Whirtley said. "He talked to us a little about the future of the church. That was my favorite part of the trip, and I still even get choked up talking about it."

Donna Falkner, business manager at St. Luke the Evangelist Parish in Livingston County, realized Bishop Clark was "a wonderful, kind and caring shepherd" in March of 2000, when her good friend Father Desmond O’Neill, pastor at St. Lucy in Retsof and St. Thomas Aquinas in Leicester, had a ruptured brain aneurism and collapsed after morning Mass at St. Lucy. Bishop Clark stood with Falkner and Father O’Neill’s brother and prayed for the priest before he passed away. Later, as a devastated Falkner was leaving church after the funeral, Bishop Clark gently placed his hand on her cheek in consolation.

"I have never forgotten that tiny gesture of his recognizing my feelings that day without a word between us," Falkner said.

Terry Kelly likewise has clear memories of Bishop Clark’s kindness and warmth. In 1982 he visited the home of her parents, Ellen and Ed Kelly, to confirm her nephew, Patrick Kelly, who had muscular dystrophy. Two dozen of 13-year-old Patrick’s family members, most of them connected to St. Ann Parish in Owasco, gathered in a semicircle in the living room. Bishop Clark asked them to all share their names and relations to the teen, and afterwards was able to correctly name nearly every person in the room, Kelly said.

"I was so impressed with his intense and keen interest in the family," she said.

Bishop Clark saw many of those family members again this past January when St. Ann celebrated its 100th anniversary, an event that turned out to be Ellen Kelly’s last outing. After her mother died in March, Terry Kelly was touched when she received a letter from Bishop Clark expressing his condolences and how much he’d enjoyed seeing Ellen Kelly and her family again in January.

The bishop is quick to make time for anyone he thinks is in need, noted Father Michael Bausch, pastor of Church of the Transfiguration in Pittsford, recalling a phone call he placed to Bishop Clark on Good Friday in 1996. For more than a week Father Bausch had been wrestling with a decision the bishop had asked him to make about a potential new pastorate. When he called the bishop on Good Friday, Bishop Clark heard the indecision and frustration in his voice, and invited him to come to his office to talk immediately, Father Bausch said.

"We had a wonderful conversation and I felt his strong reassurance that whatever decision I made, relative to the offered position, he would respect my decision. To this day I am deeply grateful to him for responding so quickly, with great affirmation, and beside that, in the busyness of Holy Week," Father Bausch said.

Sheryl Zabel, pastoral associate at Fairport’s Church of the Assumption, also is grateful to Bishop Clark. In 2005 he went the extra mile for her — literally — when he brought one of her textbooks with him to Rome and asked its author, Cardinal Walter Kasper, to autograph it. Bishop Clark carried the autographed book with him on his several-thousand-mile journey home, and it’s now one of Zabel’s most cherished possessions.

"I was absolutely beyond thrilled. I mean, how many Catholics are in our diocese, and he did that lovely favor for me? But that is the kind of person he is," Zabel said.