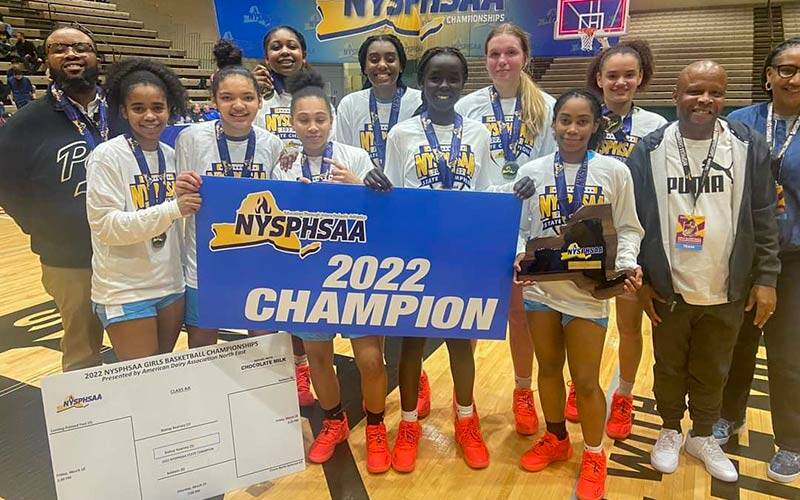 When your quest is a state title, the pressure to reach that exclusive territory grows by the game.

Yet in the case of Bishop Kearney girls’ basketball, any tension the Kings may have felt was scant compared to the way they unnerved their opponents.

With its vaunted pressure defense creating consistent havoc, BK emerged as the state Class AA champion with a 63-57 victory over Baldwin of Section 8. The title game was played March 19 at Hudson Valley Community College.

The state final saw Bishop Kearney trailing Baldwin, a Long Island team, by a 17-14 count after one quarter before the Kings went ahead, 29-27, at halftime. The third quarter proved decisive as Kearney held a 22-11 scoring edge, taking a 51-38 lead over the Lady Bruins into the final eight minutes. BK’s advantage grew as high as 16 points before Baldwin rallied late to close to within five. However, the Kings held on for the program’s second state title in history to go with its 2013 crown, when Kearney competed in Class C.

BK finished the state-championship contest with 18 steals. Top scorers for the Kings were Aniya Rowe, who netted 20 points; Caydence Hadley, with 15; and Amaia Jackson, who chipped in with 12. Their efforts were enough to offset a giant individual effort by Baldwin’s Dally Moreno, who totaled 23 points and 20 rebounds.

Kearney’s path to the state final had begun with a 64-55 victory over Lancaster of Section 6 in quarterfinal play March 12, as Klarissa Goode (19), Kaia Goode (16) and Rowe (14) led the Kings in scoring. The Kings’ offense then exploded for a 94-42 decision over Section 4’s Corning-Painted Post in semifinal action March 18, as Rowe and Jackson totaled 27 and 23 points, respectively.

BK had earned its way into the state tourney with a hard-earned 58-52 victory over second-seeded Fairport in the Section 5 Class AA final March 5. The top-seeded Kings got 22 points from Rowe and 13 from Kaia Goode in a contest that was tight throughout before BK made a decisive fourth-quarter run.

Preceding the sectional-title-game win were a 91-29 quarterfinal triumph over eighth-seeded Rush-Henrietta Feb. 26, as Klarissa Goode had 24 points and Hadley totaled 13 points and 14 rebounds; and a 65-44 semifinal victory over No. 4 Victor March 2 behind 17 points from Kaia Goode.