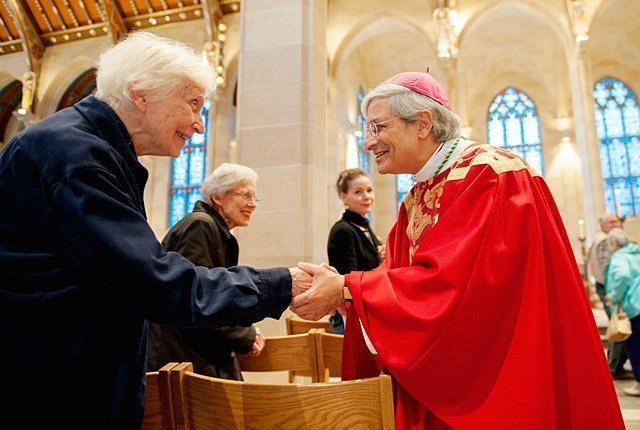 ROCHESTER — Most of the people who arrived at Sacred Heart Cathedral on Nov. 6 for the daily 12:10 p.m. Mass had no idea they were about to meet Bishop Salvatore R. Matano, the newly appointed ninth bishop of the Diocese of Rochester.

By the time they left the cathedral an hour later, however, many of them had met their new shepherd and been won over by his warmth, sincerity and reverence for the Eucharist. Bishop Matano, for his part, had told them they were among the diocese’s richest treasures and asked them to pray for him.

Shortly before the Mass began, several people audibly gasped when the Cathedral Community’s pastor, Father Kevin McKenna, announced that Bishop Matano would preside at the Mass that day and be joined by Bishop Emeritus Matthew H. Clark and Bishop Robert J. Cunningham, who has been serving as the diocese’s apostolic administrator since September 2012.

"Our usual 12:10 Mass, as you can see, is going to be exciting," Father McKenna said before the Mass began.

Bishop Matano celebrated this first Mass at Sacred Heart less than an hour after being introduced to the diocese during a press conference at the diocesan Pastoral Center in Gates. He downplayed the media attention, however, and instead refocused the spotlight on the Eucharist, which he called "the very body, blood and soul and divinity of Jesus."

"In the midst of all the activity today, this is really the most important," Bishop Matano said. "We come here to bring to the Lord all our needs and intentions. I ask for your prayers, but at the same time I pray for you."

When he later stepped forward to deliver his homily, Bishop Matano walked around the altar to stand directly in front of those seated in the cathedral’s front row. Many years ago, he said, the bishop of a well-to-do diocese was asked to name his diocese’s biggest treasures. He responded that his diocese’s greatest treasures were not buildings or items, but the people who faithfully attended Mass every day. Looking directly at the members of his new flock, Bishop Matano assured them that he valued them as much as story’s bishop treasured his daily Mass-goers.

"Day in, day out … you carve out a part of your day to come to Mass and be here with God," Bishop Matano said.

In the day’s Gospel reading from Luke 14:25-33, Jesus told his disciples to take up their crosses and follow him. One way to do this is by showing fidelity to Jesus by making time for him day after day and year after year, Bishop Matano said.

"What is a saint but anyone who has kept in constant communication with Jesus? This is what we’re doing at Mass. We’re communicating with Jesus through the Eucharist," he said, noting that such communication is what gave St. John Fisher, patron of the Diocese of Rochester, and other saints the strength to lay down their lives for their faith.

Bishop Matano called Sacred Heart Cathedral a "magnificent" mother church, praising its stained-glass windows and architecture. Such beauty was made possible, he said, because many people made sacrifices so they could honor God with a beautiful church.

"And you in this mother church complete and fulfill its beauty. You represent for me today the countless numbers of people throughout the diocese who are so faithful," Bishop Matano said.

"May God bless you. Pray for me, and I will always pray for you, and I look forward to my next phase of life here among you," he added.

After Mass Bishop Matano approached Marie and Ernest D’Ambra, whose son was killed in a car accident in September. The Mass had been offered in their son’s memory at the request of his friend, Kevin Mannara, and Mannara’s family. The D’Ambras fell away from the Catholic Church several years ago but still agreed to come to the Nov. 6 Mass, not knowing it would be the first Mass Bishop Matano would say in his new diocese. They also didn’t realize they’d soon be among the first parishioners in the diocese to speak with him. Marie D’Ambra said she and her  husband were touched by the way the bishop spoke to them.

"It was absolutely beautiful. It was down-to-earth and it wasn’t just a lot of nothing. I wish I could have talked to him all night. It was really very nice, and I feel better today," she told the Catholic Courier Nov. 7.

The D’Ambras were so impressed that they’re considering joining the Cathedral Community. They didn’t realize until later that Bishop Matano had spoken at length at that morning’s press conference about his desire to reach out to Catholics who’ve left the church and bring them home. Bishop Matano apparently succeeded in doing just that less than 12 hours after his appointment was announced.

Also after Mass, several parishioners gathered in groups to discuss their impressions of their new shepherd.

"It is a blessed day! I wasn’t expecting this," parishioner Faith Connor said excitedly. "I think he’s warm and charming and very connected."

Earlier in the day Connors had heard that a new leader had been selected for the Rochester Diocese, but said she hadn’t expected to meet him at Mass that afternoon.

"What a blessing to have him here today. I think he’s warm and charming and very connected," she added.

Mary Ann Puglisi Martinez, a parishioner of Rochester’s Our Lady of Victory/St. Joseph, said she was thrilled to see the new bishop at Mass.

"I think he’s very serious and I also think he’s going to bring some fresh thoughts on Catholicism and where we’re going. We need him, and we’ve been without a bishop too long. It’s great to have him here," she said.

Steve Jost said he hadn’t heard the news of the new bishop before arriving at the cathedral, but the presence of more cars than usual in the parking lot and cameramen inside the cathedral tipped him off. Jost, who belongs to St. Jude the Apostle Parish in Gates but frequently attends daily Mass at the cathedral, said he was impressed by Bishop Matano’s reverence for the Eucharist and the way he knelt after receiving Communion.

"We’re very blessed to have a holy bishop," he said.