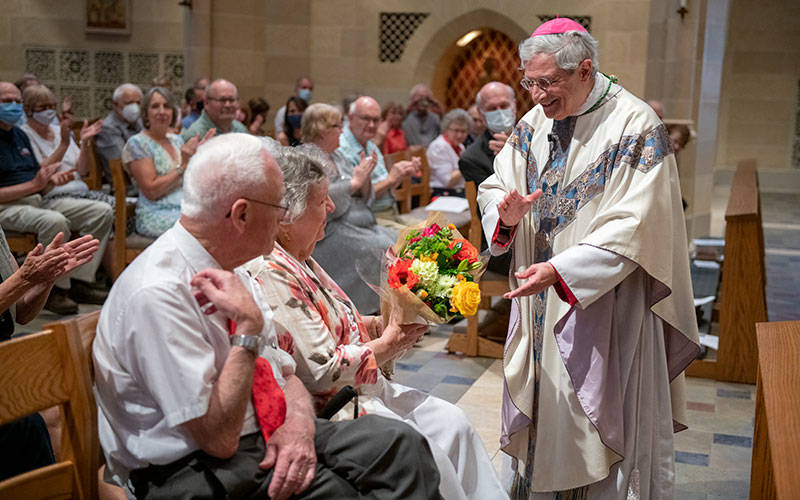 Bishop Salvatore R. Matano gives flowers to William and Athalene Fisher of St. Mary Church in Dansville. The Fishers, who have been married 70 years, were the longest-married couple to attend the Mass. (Courier photo by Jeff Witherow)

ROCHESTER — “It appears the best words that you both said were, ‘I do,’” Bishop Salvatore R. Matano exclaimed as he handed a bouquet of flowers to William and Athalene Fisher at Sacred Heart Cathedral Aug. 29.

The Fishers were among the more than 100 couples who’d gathered at the cathedral for the Diocese of Rochester’s annual Marriage Jubilee Mass. During the liturgy, the couples renewed their marriage vows and applauded when Bishop Matano honored the Fishers as the longest-married couple present at the Mass.

“It went by fast,” Athalene Fisher said of the 70 years she’s been married to William Fisher.

Some of the couples participating in the Mass had been married nearly as long as the Fishers, while others had only been married for several years, and at least a dozen couples were celebrating their 50th anniversaries.

“Today we thank God for our married couples, who have witnessed to the solemn commitment of marriage by their very own lives and the extraordinary — absolutely extraordinary — number of years represented in these marriages we celebrate,” Bishop Matano said during the liturgy.

The love shared by husbands and wives mirrors the love Christ shows for the church, the bishop noted.

“Today we honor and pray for you who have made Jesus a true and intimate part of your marriage,” he said. “May the Lord continue to bless and to sustain your married life. Today the holy church renews its profound esteem and support for your vocations.”

Marriage is the union of mind, heart, soul and spirit, in a union so profound that the two become one, Bishop Matano said. And while romance and infatuation may precede a marriage, they are never enough to sustain it through the inevitable differences of opinion, disagreements and even occasional exchanges of harsh words, he said. The love shared by spouses must be able to overcome such momentary difficulties.

“To have such love endure is a great challenge, and demands the mutual effort and firm commitment of the spouses,” Bishop Matano said.

There are steps husbands and wives can take to prevent difficulties from driving wedges between them, said Athalene Fisher.

“Always kiss each other first thing in the morning and last thing at night,” she advised, speaking from experience. “It brings us closer together.”

The Fishers were married Nov. 10, 1951, at St. Mary Church in Dansville and raised five children. They now have 13 grandchildren and 20 great-grandchildren, with more on the way, she said.

“It’s wonderful to be married so long. We get along so well,” said Athalene Fisher, who with her husband belongs to St. Lawrence Parish in Greece.

A healthy marriage also has to include “give and take,” with both spouses remembering to both give and take, she added.

Surrounding yourself with other people of faith who are married also helps spouses navigate the rough patches that are sure to pop up, remarked Carrie Carl.

“When you surround yourself with them, it just makes it that much easier,” added her husband, Brian.

The Carls were married at Sacred Heart Cathedral on Oct. 14, 1995, and returned to the cathedral for the Marriage Jubilee Mass. Having recently become empty nesters, they find themselves still learning about marriage as they go.

“You have to be intentional about making sure you continue to grow together, especially through the years of raising children and teenagers,” Carrie Carl said.