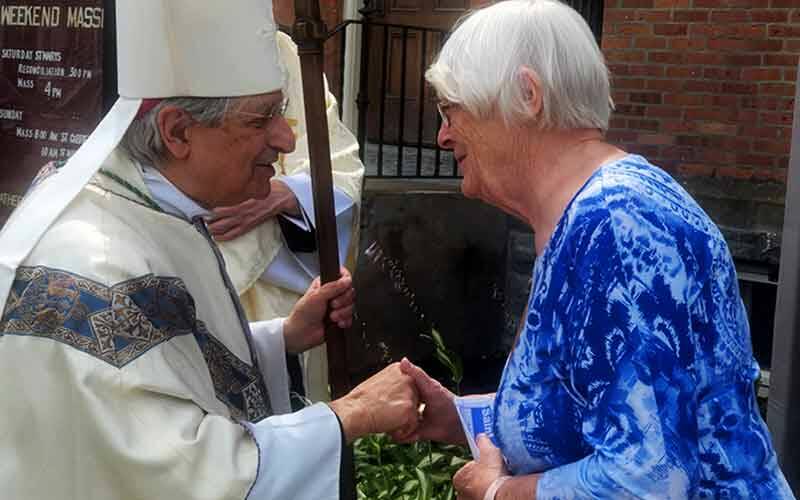 Father Jaeger serves as pastor of the only parish in the Diocese of Rochester named after the French saint, who is renowned as the patron of all priests. In addition, he keeps a statue of St. John Vianney — a prized possession since his seminary days more than 35 years ago — displayed in the parish rectory.

“We thought it would be great for him to celebrate the feast. He accepted immediately upon getting the invite,” Father Jaeger said.

St. John Vianney was well-known as a fervent evangelizer

Bishop Matano traveled to Steuben County July 31, four days before the actual feast day, to celebrate the 10 a.m. Sunday Mass with a large congregation at St. Mary Church in Bath.

“It’s a great pleasure to be among all of you today,” the bishop said at the beginning of his homily.

Bishop Matano then devoted much of the homily to the life of St. John Vianney (1786-1859), noting that the saint — having been an unexceptional seminary student — was assigned a parish with only 230 members in Ars, a small town in a remote part of France.

“Was he discouraged? Hardly. He set his hand to the plow and never looked back,” Bishop Matano said, pointing out that John Vianney became well-known for his deep Eucharistic devotion that included fervent evangelization efforts as well as routinely spending 12 to 14 hours a day hearing confessions.

Bishop Matano added that 300 priests and 6,000 faithful attended the funeral of St. John Vianney, who was canonized in 1925. The bishop noted that today Ars is a popular pilgrimage destination due to the large international following that St. John Vianney attracts. In fact, Father Aaron Kelly — who was ordained July 2 as the newest priest of the Diocese of Rochester — has visited the saint’s tomb while attending seminary in Rome.

Following Mass on July 31, Bishop Matano joined worshipers for a reception in O’Malley Hall adjacent to St. Mary Church, marking a pleasant end to the morning.

The bishop’s visit led into a busy late-summer stretch for St. John Vianney Parish, which was established in 2012 when St. Mary — along with St. Gabriel in Hammondsport, located eight miles to the north — were combined into a single parish after having previously been clustered.

On Aug. 1, the first meeting of a parish book club took place. It was to meet for six consecutive Mondays at St. Mary, discussing Scott Hahn’s book The Lamb’s Supper: The Mass as Heaven on Earth. The book club was established in conjunction with a recently launched Eucharistic Revival led by the U.S. Conference of Catholic Bishops. The national revival, which will run through 2025, endeavors to foster deeper devotion to and knowledge about the Eucharist.

In addition to the book-club initiative, a five-day adult vacation Bible camp was scheduled for Aug. 15-19 at St. Mary. The camp’s final day featured an appearance by nationally known cartoonist/artist Deacon Dan Reynolds of the Diocese of Syracuse, featuring his “Divine Comedy” presentation.

This wealth of activity is pleasing to Father Jaeger, who has spent the past 14 years serving the Catholics of Bath and Hammondsport. He was appointed sacramental minister of the St. Mary/St. Gabriel cluster in 2008, and he became pastor of St. John Vianney Parish in 2019 upon the retirement of Deacon David LaFortune, pastoral administrator.

“It’s exciting to be a priest with these wonderful people,” Father Jaeger remarked.

Tags: Steuben County
Copyright © 2022 Catholic Courier, Inc. All rights reserved. Linking is encouraged, but republishing or redistributing, including by framing or similar means, without the publisher's prior written permission is prohibited.