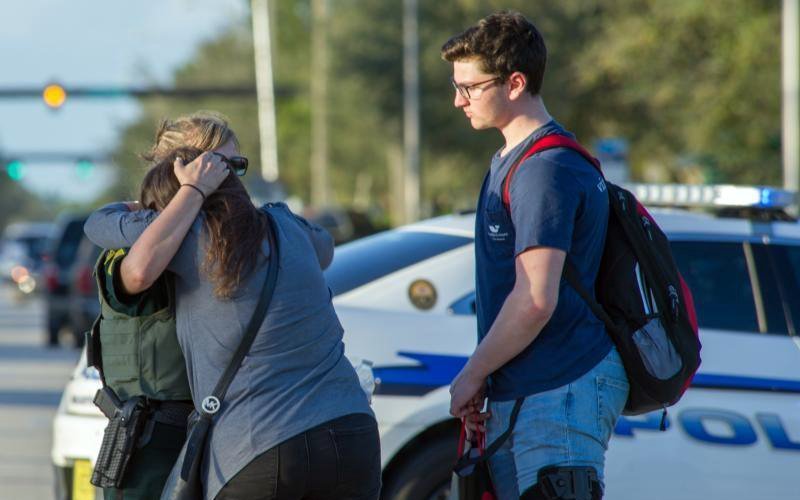 A police officer embraces a student after a shooting Feb. 14 at Marjory Stoneman Douglas High School in Parkland, Fla. At least 17 people were killed in the shooting. The suspect, 19-year-old former student Nikolas Cruz, is in custody, the sheriff said. (CNS photo by Giorgio Viera/EPA)

Bishop Salvatore R. Matano has joined his brother bishops from around the country in praying from the victims and families of the Feb. 14 shooting at Marjory Stoneman Douglas High School in Parkland, Fla., that killed 17 people and injured at least 14 others.

On Feb. 14, Galveston-Houston Cardinal Daniel DiNardo, president of the U.S. Conference of Catholic Bishops, released the following statement on behalf of the USCCB:

“We are deeply saddened by the shootings in Broward County, Florida, and by the needless and tragic loss of life. May the mercy of God comfort the grieving families and sustain the wounded in their healing. Catholics and many other Christians have begun the journey of Lent today. I encourage us to unite our prayers and sacrifices for the healing and consolation of all those who have been affected by violence in these last weeks and for a conversion of heart, that our communities and nation will be marked by peace. I pray also for unity in seeking to build toward a society with fewer tragedies caused by senseless gun violence. Our hope is in the Lord, as he promised after his resurrection, ‘behold, I am with you always, until the end of the age’ (Mt. 28:20).”