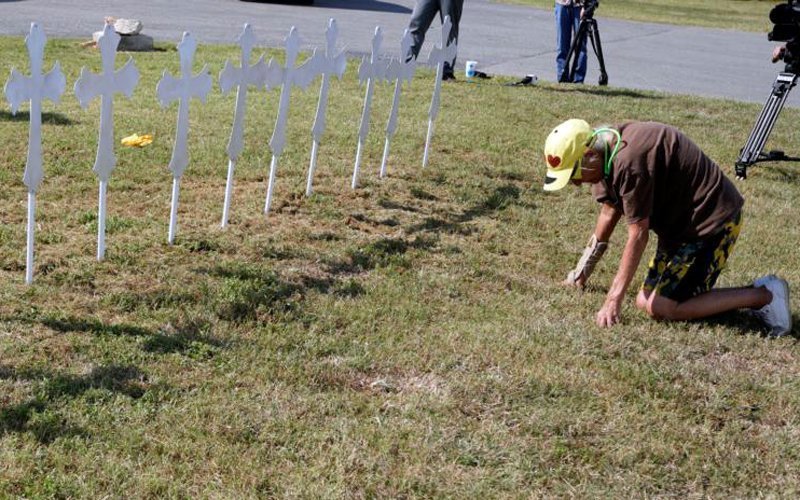 A man prays Nov. 6 in front of 26 crosses erected near the site of the mass shooting at the First Baptist Church of Sutherland, Texas. A lone gunman entered the church during Sunday services Nov. 5 taking the lives of at least 26 people and injuring 20 more. Children were among the dead and injured. (CNS photo by Rick Wilking/Reuters)

Bishop Salvatore R. Matano has released a statement in regard to the Nov. 5 shooting at the First Baptist Church in Sutherland Springs, Texas, that killed at least 26 people and injured at least 20 others.

“My dear brothers and sisters in Christ, I join with my brother Bishops in echoing the sentiments expressed in a statement by Cardinal Daniel N. DiNardo, president of the United States Conference of Catholic Bishops, regarding the victims of the tragic Texas church shootings. I ask that you pray for all the victims, their families and the first-responders, as well as victims of recent mass violence in New York City, our nation and throughout the world,” Bishop Matano said in a statement released by the Diocese of Rochester Nov. 6.

The following is the Nov. 5 statement from Cardinal DiNardo:

“Earlier today, we heard of the mass shooting at the Baptist Church in Sutherland Springs, Texas. With Archbishop Gustavo Garc√≠a-Siller, I extend my prayers and the prayers of my brother bishops for the victims, the families, the first responders, our Baptist brothers and sisters, indeed the whole community of Sutherland Springs. We stand in unity with you in this time of terrible tragedy — as you stand on holy ground, ground marred today by horrific violence.We ask the Lord for healing of those injured, His loving care of those who have died and the consolation of their families.This incomprehensibly tragic event joins an ever-growing list of mass shootings, some of which were also at Churches while people were worshipping and at prayer. We must come to the firm determination that there is a fundamental problem in our society. A Culture of Life cannot tolerate, and must prevent, senseless gun violence in all its forms. May the Lord, who Himself is Peace, send us His Spirit of charity and nonviolence to nurture His peace among us all.”