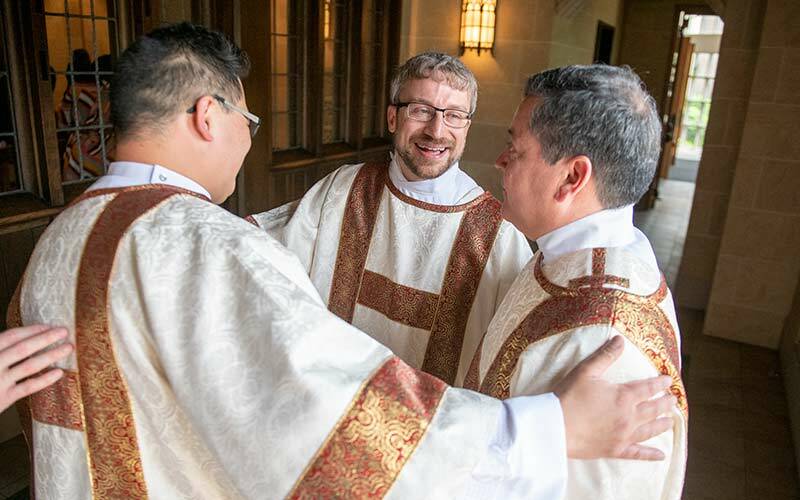 ROCHESTER — On April 17, 1982, the first class of permanent deacons was ordained for the Diocese of Rochester.

By virtue of their ordination, permanent deacons may serve at the altar, proclaim the Gospel and preach at Mass; they also receive the faculties to preside at baptisms, witness marriages and officiate at funerals outside of Mass.

“The deacon’s life of service is intended to unite the people in the faith by preaching the Word of God and proclaiming the magisterial teachings of the church,” Bishop Matano said of the role of deacons during his homily.

“As deacons, you are called to inspire this transformation, renewal, conversion in the hearts of your sisters and brothers in the midst of the confusion, anxiety, depression and division, both in society and in the church herself in our modern age absorbed by misinformation, scandal, violence and oppressive tyranny,” he added.


The two-hour liturgy included the ancient diaconal ordination rites such as the laying on of hands, prayer of consecration, investiture with stole and dalmatic, and presentation of the Book of the Gospels. At the conclusion of the ordination rites, the more than 30 permanent deacons in attendance extended the fraternal sign of peace to the newly ordained — a gesture that was absent from the 2020 and 2021 diaconal ordinations due to the COVID-19 pandemic — to welcome Deacons de la Fuente, DeLucenay and Rivera into the Order of Deacon.

At the conclusion of the Mass, a crowd of family and friends extended that same warmth to the new deacons, eagerly awaiting to offer congratulations and pose for photos.

Deacon Rivera, 52, had family in attendance from Puerto Rico, Florida and Georgia. His 89-year-old father, Deacon José A. Rivera, had traveled to Rochester from Florida to vest him during the liturgy.

“It was such a blessing,” Deacon Rivera said of having his father vest him and having all his family present for his ordination.

Deacon de la Fuente, 49, who was joined by his wife, Margarita (Maita), their five children, and other family and friends, echoed those sentiments.

“I’m just so happy and blessed that we have family here to sort of focus us in,” he said.

Deacon DeLucenay, 36, acknowledged that although at times he could not see his family and friends during the Mass, he could feel their love and support.

After photos and greetings with well-wishers concluded, Deacon Edward Giblin, director of the Office of the Permanent Diaconate for the Diocese of Rochester, handed each new deacon a white envelope. It contained a letter from Bishop Matano informing him of the parish where he will start his diaconal ministry. Surrounded by their wives and family, the three deacons opened their envelopes with much anticipation and excitement.

Deacon de la Fuente, a parishioner of St. Louis Church in Pittsford, will begin his diaconal ministry on the west side of Monroe County at St. Mark Church in Greece.

“I’m looking forward to really uniting in the effort of putting the Eucharist front and center in our lives and in our faith,” he said about beginning his ministry.

“It’s going to be awesome,” Deacon DeLucenay exclaimed after learning he will be ministering with his friend. “I just hope that we have the energy and joy to serve God’s people in Spencerport.”

Deacon Rivera will minister at his home parish of St. Leo in Hilton, where his wife, Rita (Nina), is the part-time Christian-formation coordinator. Deacon Rivera, who also works as a judicial assistant in the Diocese of Rochester’s Tribunal, said being assigned to his home parish is a homecoming.

“(I’m looking forward) to serving for the glory of God with the help of the Holy Spirit,” he remarked.