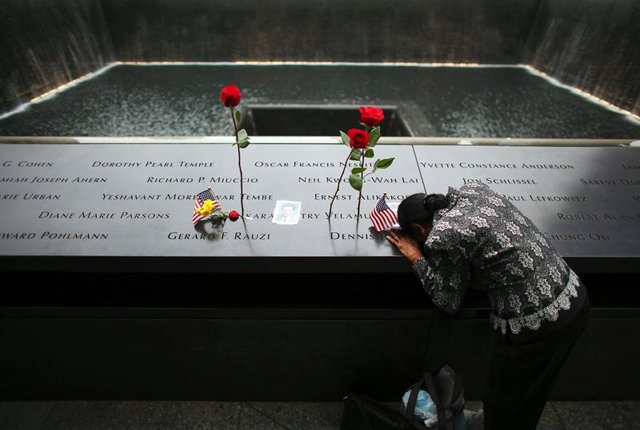 A woman grieves at the inscription of her late husband's name at the edge of the North Pool near the national 9/11 Memorial in New York City Sept. 11.

Bishop Salvatore R. Matano has released a message in regard to the 15th anniversary of the terrorist attacks of Sept. 11, 2001.

"Fifteen years ago this Sunday, our nation was forever changed by the horrendous events of Sept. 11, 2001. On that day, our nation suffered a single day of carnage that tore at the very fabric of our daily life and broke our hearts. Fifteen years later, with the sorrow and anger and fear of that day still fresh, we also bear the grief of many more unbearable and horrific acts of terrorism and violence throughout our world.

"Sadly, these events are part of the long litany of senseless violence in the history of humanity. As Christians, the Cross at Calvary reminds us that our Lord and Savior, too, was an innocent victim of an unjust and cruel act. Those who died in these terrible acts also have suffered a kind of crucifixion from their perpetrators. But our faith tells us if we die with Christ, we also will rise with Him one day. From this faith comes our certainty that the grave is the threshold to external life. As Pope Saint John Paul II said, ‘Faith come to our aid in these times when words seem to fail. Even if the forces of darkness prevail, those who believe in God know that evil and death do not have the final say.’

"With this faith as our compass, let us envision a future of peace, working together with people of all faiths for an end to the violence that plagues us. Let us never forget those innocents who tragically died on September 11, 2001, and continue to pray for the repose of their souls and their families. Let us pray daily for all those first-responders and service men and women who risk their lives to shield us from harm.

"In imitation of Mother Teresa of Calcutta, recently declared a saint, may we build a culture of life which sees in every person the face of Jesus."