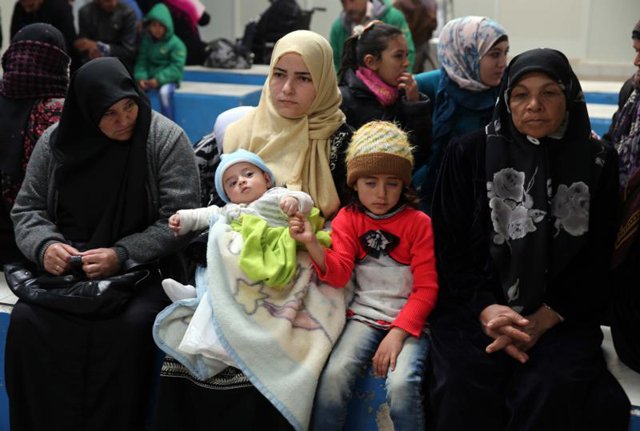 Syrian refugees wait at a clinic in 2016 at a camp near the Jordanian city of Mafraq. Promised resettlement in the United States after escaping death and destruction in their homeland, many Syrian refugees are frustrated and angry over President Donald Trump's executive action banning their entry to the U.S. until further notice.

Bishop Salvatore R. Matano has joined Catholic bishops around the nation in expressing his desire for a "just and charitable resolution" to the controversy surrounding refugees seeking entry into the United States

The controversy arose on Jan. 27, when President Donald Trump signed an executive order temporarily suspending the nation’s Refugee Admissions Program for 120 days. Under the order, refugees from Syria are denied entry into the United States indefinitely, and citizens of Syria, Iraq, Iran, Sudan, Libya, Yemen and Somalia are barred from entry for 90 days.

The executive order also proposes prioritizing applications from refugees who are members of religious minorities in their own nations.

The United States’ Catholic bishops do not desire to enter the political arena, but rather to "acknowledge the dignity of every person, with the utmost compassion for those feeling persecution, violence, tyranny, scorn for their religious beliefs and attacks upon innocent human lives," Bishop Matano wrote in his Jan. 31 statement.

The nation’s bishops are asking the Holy Spirit to guide the United States to adopt immigration reform that will "screen vigilantly for infiltrators who would do harm," while at the same time be equally vigilant about welcoming friends, Bishop Matano wrote, referring to a Jan. 30 joint statement from Cardinal Daniel N. DiNardo and Archbishop Jose H. Gomez, the U.S. Conference of Catholic Bishops’ president and vice president, respectively.

In their statement, Cardinal DiNardo and Archbishop Gomez called on the Catholic faithful to unite their voices to speak in defense of human dignity.

"Our prayer is rooted in those two great commands: to love God and to love our neighbor," Bishop Matano noted.

These two commandments, the bishop said, bring to life the words inscribed on the Statue of Liberty: "Give me your tired, your poor, your huddled masses yearning to breathe free."

"Kindly keep in prayer our sisters and brothers seeking a place of freedom, a place of safety, a place of refuge from oppression," Bishop Matano asked.