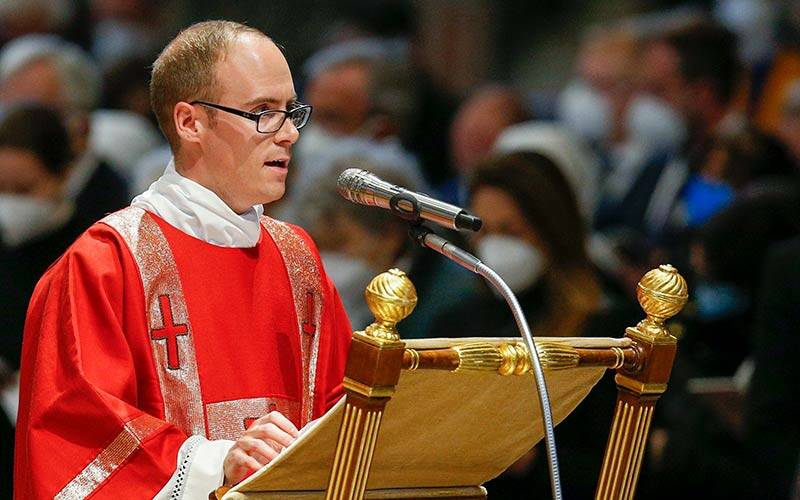 Deacon Aaron Kelly clearly recalls expressing, as a second-grader, a desire to become a father.

“No, a father at church,” young Aaron replied.

His ambition turned out to be much more than a childhood whim, holding strong through adolescence and into young adulthood. Now, some 20 years later, Deacon Kelly will soon acquire the title “Father.”

He will be ordained a priest of the Diocese of Rochester by Bishop Salvatore R. Matano on Saturday, July 2, during a 10 a.m. ordination Mass at Rochester’s Sacred Heart Cathedral.

“It just brings a great joy,” said Deacon Kelly, who will turn 27 May 21. “The fact that on July 2, I’ll enter into the cathedral and leave as a priest — “Father” — it brings a lot of awe and wonder. It’s just something I’ve been waiting and working so long for.”

He entered seminary right after his 2013 graduation from Horseheads High School, attending Cathedral Seminary House of Formation and St. John’s University in New York City. From 2016 to 2018, he studied at Theological College at Catholic University of America in Washington, D.C. He then went to Rome, studying at the Pontifical North American College where he earned a baccalaureate degree in sacred theology in 2021.

Bishop Matano ordained Deacon Kelly as a transitional deacon at Sacred Heart Cathedral in August 2021. He has spent the past academic year at Pontifical Gregorian University, also in Rome, working toward a licentiate in canon law.

As a deacon, he has been involved in various apostolates and ministries in Rome, with a particular focus on students at the Rome Center of Catholic University of America. On April 15, he served as a deacon for the Good Friday liturgy at which Pope Francis presided.

On July 3, the day after his ordination, he will celebrate his first Mass at East Rochester’s St. Jerome Church, where he logged a summer assignment in 2019. The 2 p.m. liturgy, like his ordination Mass, will be open to the public.

Deacon Kelly then plans to celebrate Mass at several Southern Tier churches this the summer, which he described as “kind of like a homecoming.” He will return to Rome in late September to begin his final two years of study for the canon law licentiate.

Despite studying so far from home and deferring the start of local ministry to complete his degree, Deacon Kelly emphasized that his long-term priestly service will be in the Diocese of Rochester. He said he eagerly awaits the opportunity to minister — “to just bring the presence of God to people in their lives at any given moment, to be that fatherly presence.”

Deacon Kelly expressed gratitude for the many parishioners, clergy, family and friends in this diocese who have supported him in answering his vocational call ever since that spiritual voice surfaced many years ago.

“I can look back and see the thread, just God’s nudging, pulling and bringing me to where I am today,” Deacon Kelly said, noting that he responded to the call by “continually taking it seriously and not really pushing it aside.”

He said he recalls singing the hymn “Here I Am, Lord” in second-grade children’s choir and repeatedly being moved by its lyrics over the years, noting “that God is leading me — and to get out of the way of that and to simply respond ‘yes’ and to follow.”

“I’ve always found joy in going back to the initial memory of wanting to be Father,” he added. “That’s very much where my thoughts are today. That thought has burned a lot deeper and really developed, but in many ways it goes back to that.”